The President in Iowa City: "We're Not Going Back, This Country's Moving Forward"

March 25, 2010 at 5:15 PM ET by Jesse Lee
Twitter Facebook Email
Summary:
The President returns to the place where he first announced his plan for health reform back in May of 2007.

This afternoon the President was in Iowa City, the place where he first announced his plan for health reform back in May of 2007.

THE PRESIDENT:  …On Tuesday, after a year of debate, a century of trying, after so many of you shared your stories and your heartaches and your hopes, that promise was finally fulfilled.  (Applause.)  And today, health insurance reform is the law of the land all across America.  (Applause.)

THE PRESIDENT:  Yes, we did.  Yes, we did.  Just like the campaign that led us here, this historic change didn’t start in Washington.  It began in places like Iowa City, places just like this, with Americans just like you.
It began when people had the courage to stand up in town hall meetings and talk about how insurance companies were denying their families coverage because of a preexisting condition.

It began when folks wrote letters about how premium hikes of 40 and 50 and a hundred percent were forcing them to give up their insurance.

It began when countless small business owners and families and doctors shared stories about a health care system that works better for the insurance industry than it does for the American people.

So this is your victory, because when the special interests sent an army of lobbyists to Congress, they blanketed the airwaves with millions of dollars of negative ads, you mobilized and you organized and you refused to give up.  And when the pundits were obsessing over who was up and who was down and how is this affecting the Obama administration and what’s going on over in the House, you never lost sight of what was right and what was wrong.  You knew this was not about the fortunes of one party -- this was about the future of our country.  (Applause.)  And today, because of what you did, that future looks stronger and more hopeful and brighter than it has in some time -- because of you.  (Applause.) 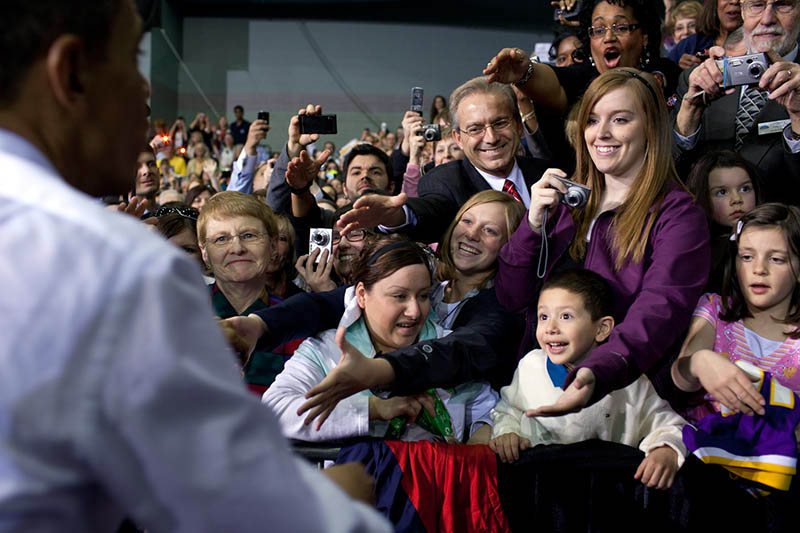 President Barack Obama shakes hands along the ropeline after speaking at a health insurance reform rally at the University of Iowa in Iowa City, Iowa March 25, 2010. (Official White House Photo by Pete Souza)

He went on to single out people in the audience, and people he had met along the way who reminded him why reform was so desperately needed.  He talked about Darlyne Neff, a breast cancer survivor, and about Lauren Gallagher, whose father couldn’t get covered after her mother lost her job.  And he gave a message to those talking about "repeal" of reform:

This is the reform that some folks in Washington are still hollering about, still shouting about.  Now that they passed it -- now that we passed it, they’re already promising to repeal it.  They’re actually going to run on a platform of repeal in November.  You’ve been hearing that.  And my attitude is:  Go for it.  (Applause.)

If these congressmen in Washington want to come here in Iowa and tell small business owners that they plan to take away their tax credits and essentially raise their taxes, be my guest.  If they want to look Lauren Gallagher in the eye and tell her they plan to take away her father’s health insurance, that’s their right.  If they want to make Darlyne Neff pay more money for her check-ups, her mammograms, they can run on that platform.  If this young man out here thinks this is a bad bill, he can run to repeal it.  If they want to have that fight, we can have it.  Because I don’t believe that the American people are going to put the insurance industry back in the driver’s seat.  We’ve already been there.  We're not going back.  This country is moving forward.  (Applause.)