On March 11th, 2010, President Obama issued an Executive Order launching the National Export Initiative, with the goal of doubling U.S. exports over the next 5 years in support of 2 million new jobs.  As Deputy U.S. Trade Representative, one of the ways in which I help promote exports and support new jobs is by supervising the Office of Small Business, Market Access, and Industrial Competitiveness.  This office is responsible for supporting small businesses and helping them increase their exports. 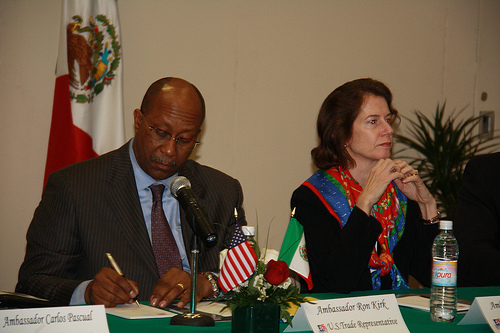 Today, there are nearly 30 million small and medium-sized businesses of every kind in the United States.  These businesses are the primary sources of jobs for Americans, and they have generated almost two-thirds of all new employment during the last 15 years.  Within this part of the business community, there is one segment that is growing faster than most: enterprises owned by women.  Today small businesses owned by women employ more than 4 million workers and contribute about $1 trillion to the U.S. economy.  Even among these thriving companies, it is clear that businesses that export tend to grow faster, add jobs faster, and pay higher wages.  Yet currently only 1 out of every 100 small and medium-sized businesses markets its products abroad, and most of these companies export only to a single country.  At the office of the United States Trade Representative (USTR), and in coordination with other U.S. government agencies as part of the National Export Initiative, we are working to find new ways to help these business owners boost their exports in order to grow and prosper.

Despite their successes, women business owners in the United States continue to struggle to obtain equal access to capital and contracts.  According to the U.S. Senate Committee on Small Business and Entrepreneurship, female entrepreneurs receive more loan denials than their male counterparts.  In 2008, women won only 3.4% of all federal contracting dollars.  As a former entrepreneur myself, I know that for a woman starting her own business, or trying to take her business to the next level, every opportunity counts.  That is why I was pleased when, earlier this month, the U.S. Small Business Administration released a proposed rule aimed at expanding government contracting opportunities for women-owned small businesses.  And next month, the President will host an entrepreneurship summit that will focus, in part, on the challenges facing women entrepreneurs in Muslim communities around the world.  Shaping U.S. trade policy to foster job-creating opportunities is USTR's number one priority, and supporting small businesses, including those run by women, is an essential part of this goal.

We cannot, of course, achieve this goal simply by focusing on domestic initiatives.   In order to maximize economic growth and development, more opportunities also need to be extended to women around the world.  In too many countries, women still face significant barriers to participating in the global economy.  According to the World Trade Organization, women own only 1% of the world’s wealth, have only a 10% share of global income, and occupy only 14% of leadership positions in the public and private sector.  It is therefore no surprise that women account for 70% of the world’s poor.  This situation not only negatively impacts women and their families, but holds back countries that are only utilizing only about half of their economic potential.  It is not too late to remedy these shortcomings.  Doing so will require a concerted effort to include women in the new economic opportunities that we are creating, and not just in the United States but around the world.

At USTR, we are striving to ensure that U.S. trade policy is developed and implemented in a way that includes benefits for working women and their families.  As President Obama said on International Women’s Day earlier this month, we are “doing all of this not only because promoting women’s empowerment is one of the best ways to promote economic development and economic success.  We are doing it because it’s the right thing to do.”