The Economics of Workplace Flexibility

March 31, 2010 at 1:04 PM ET by Cecilia Rouse
Twitter Facebook Email
Summary:
A new report from the Council of Economic Advisers provides an economic perspective on the need for flexible workplace policies and practices.

As part of the White House Forum for Workplace Flexibility, the CEA released a report today presenting an economic perspective on flexible workplace policies and practices.

Work-Life Balance and the Economics of Workplace Flexibility (pdf) highlights changes in American society over the past half century, including the increased number of women entering the labor force, the prevalence of families where all adults work, increasing eldercare responsibilities, and the rising importance of continuing education. These changes are among those that have increased the need for flexibility in the workplace.

This increased need can be met with flexibility in terms of when one works, where one works, or how much one works (including time off after childbirth or other life events). As such, “workplace flexibility” encompasses a variety of arrangements that allow workers to continue making productive contributions to the workforce while also attending to family and other responsibilities.

Data suggest that many employers are adapting to the changing needs of their workers. For example, in 2007 over one-half of employers reported allowing at least some workers to periodically change their starting and quitting times, although there is variation across workers who have access to such arrangements. And while most employers offer at least some workers the ability to return to work gradually after a major life event such as the birth or adoption of a child, job sharing is less widespread and only about one-fifth of employers permit some of their employees to work from home on a regular basis.

Many firms have found that such arrangements can represent smart management practice for which the benefits outweigh the costs. However, almost one-third of firms cite costs or limited funds as obstacles to implementing workplace flexibility arrangements. At the same time, other firms report benefits in the form of lower absenteeism and turnover, improved health of their workers, and increased productivity.

Perhaps the most compelling evidence of the impact of workplace flexibility on absenteeism comes from a single large public utility that temporarily adopted a flexible work schedule in one of its sub-units while retaining standard scheduling for other sub-units. As shown in Figure 8 from the CEA report, before the program, the average rates of absenteeism were roughly similar between the sub-unit that was offered a flexible work schedule and those that were not.  In the year after the program was adopted, the sub-unit with a flexible schedule reported a more than 20 percent reduction in absences, with the absenteeism rate in the other sub-units essentially unchanged. Moreover, when the company reverted back to standard scheduling for all of the sub-units considered after a one-year trial, the rates of absenteeism of the two groups became, once again, similar.  As a rough estimate, these results, if they generalize to other firms, suggest that wholesale adoption of flexible workplace schedules could save about $15 billion a year.1 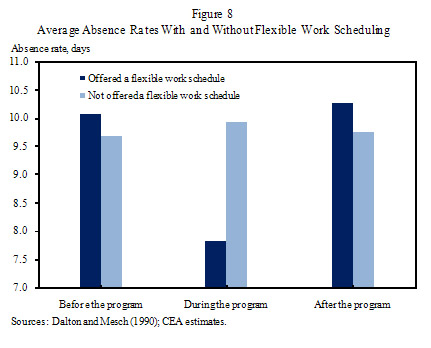 While the growing body of evidence has established a strong connection between flexibility and productivity, research that explores the mechanisms through which flexibility influences workers’ job satisfaction and a firm’s profits would better inform policy makers and managers alike.  In the meantime, the best available evidence suggests that encouraging more firms to consider adopting flexible practices can potentially boost productivity, improve morale, and benefit the U.S. economy.  Especially at this time as the U.S. rebuilds after the Great Recession, it is critical for the 21st century U.S. workplace to be organized for the 21st century workforce.

Cecilia Rouse is a member of the Council of Economic Advisers

1 Nicholson et al. (2005) estimate that the annual cost of workforce absences due to illness was $74 billion.  If workplace flexibility reduces absences by 20 percent and if all of this reduction translates into lower costs for employers, the implied savings due to flexibility are almost $15 billion a year.  Note, however, that this estimate includes only absences due to illness, so the total cost due to all absences is likely to be higher.  At the same time, there are several reasons why the estimate of cost savings may be too large.  Most importantly, the results from the intervention that reduced absences by 20 percent may not generalize to other firms.  In addition, the estimates of the annual cost of absences due to illness calculated by Nicholson et al. (2005) may overstate the true cost.