April 2, 2010 at 2:13 PM ET by Suzanne Gelderman
Twitter Facebook Email
Summary:
The Department of Energy (DOE) celebrated the 30th Anniversary of National Women’s History Month with the theme “Writing Women Back into History.”

Last week, the Department of Energy (DOE) celebrated the 30th Anniversary of National Women’s History Month, using the theme “Writing Women Back into History.”  Many members of the DOE community contributed to this successful event, including Dr. Kristina Johnson, Under Secretary of Energy; Jenny Kaplan, Deputy Director of the White House Council on Women and Girls; and Molly Murphy MacGregor, Executive Director and Co-Founder of The National Women’s History Project. 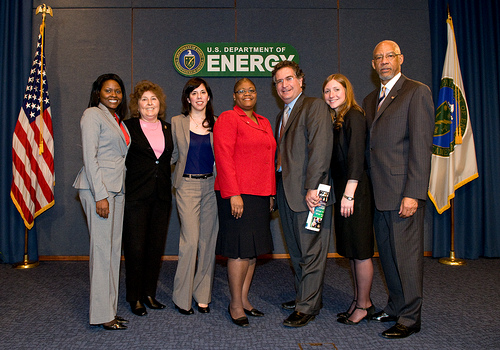 At the event, DOE staff members announced the formation of DOE’s own Council on Women and Girls (CWG).  While DOE is already represented on the White House Council on Women and Girls, the DOE CWG was created to be a department-wide system for collecting and disseminating information about women’s and girls’ issues and to develop, implement, and evaluate department-wide goals.   The DOE CWG is working to enhance opportunities for women and girls at DOE, increase participation of women in DOE programs and funding opportunities, and increase participation and leadership of women in science, technology, engineering, and mathematics (STEM) fields.  Representatives from every DOE office and other DOE employees interested in increasing the opportunities available for women and girls will participate in the DOE CWG. Additional information on the DOE CWG will be available shortly at http://diversity.doe.gov/women.htm.