April 4, 2010 at 10:02 AM ET by Kori Schulman
Twitter Facebook Email
Summary:
The White House announces details on the 2010 Easter Egg Roll. Watch a livestream of the traditional Egg Roll, music performances, storytime stage and more on Monday, April 5 on WhiteHouse.gov.

The White House recently announced details on the 2010 Easter Egg Roll – an event that will bring 30,000 people from all 50 states and DC to the White House. But you don’t have to be on the South Lawn to enjoy Monday’s festivities – we’ll be livestreaming all day on WhiteHouse.gov.

This year’s theme is Ready, Set, Go!, following the First Lady’s Let’s Move! initiative – a national effort to combat childhood obesity. So in addition to the egg roll classics, there will be new activities like sports, gardening and dancing to promote healthy and active living.
The Rock ‘n’ Egg Roll Stage will feature live music with performances by Sara Bareilles, Justin Bieber, the cast of TV show Glee, Yo Gabba Gabba, Sesame Street and more. J.K. Rowling, Reese Witherspoon, Apolo Ohno, Mariska Hargitay, Dylan and Cole Sprouse, Elmo and Maria of Sesame Street and Betty DeGeneres will read on the Storytime Stage.
Update: The Easter Egg Roll livestream schedule for Monday, April 5, 2010 has been added below. Watch the events live on WhiteHouse.gov/live
Rock 'n' Egg Roll Stage:
Story Time Stage:
Learn more about the White House Easter Egg Roll with 50 quick facts and tune in to the livestream on Monday, April 5, 2010.
Ticketing 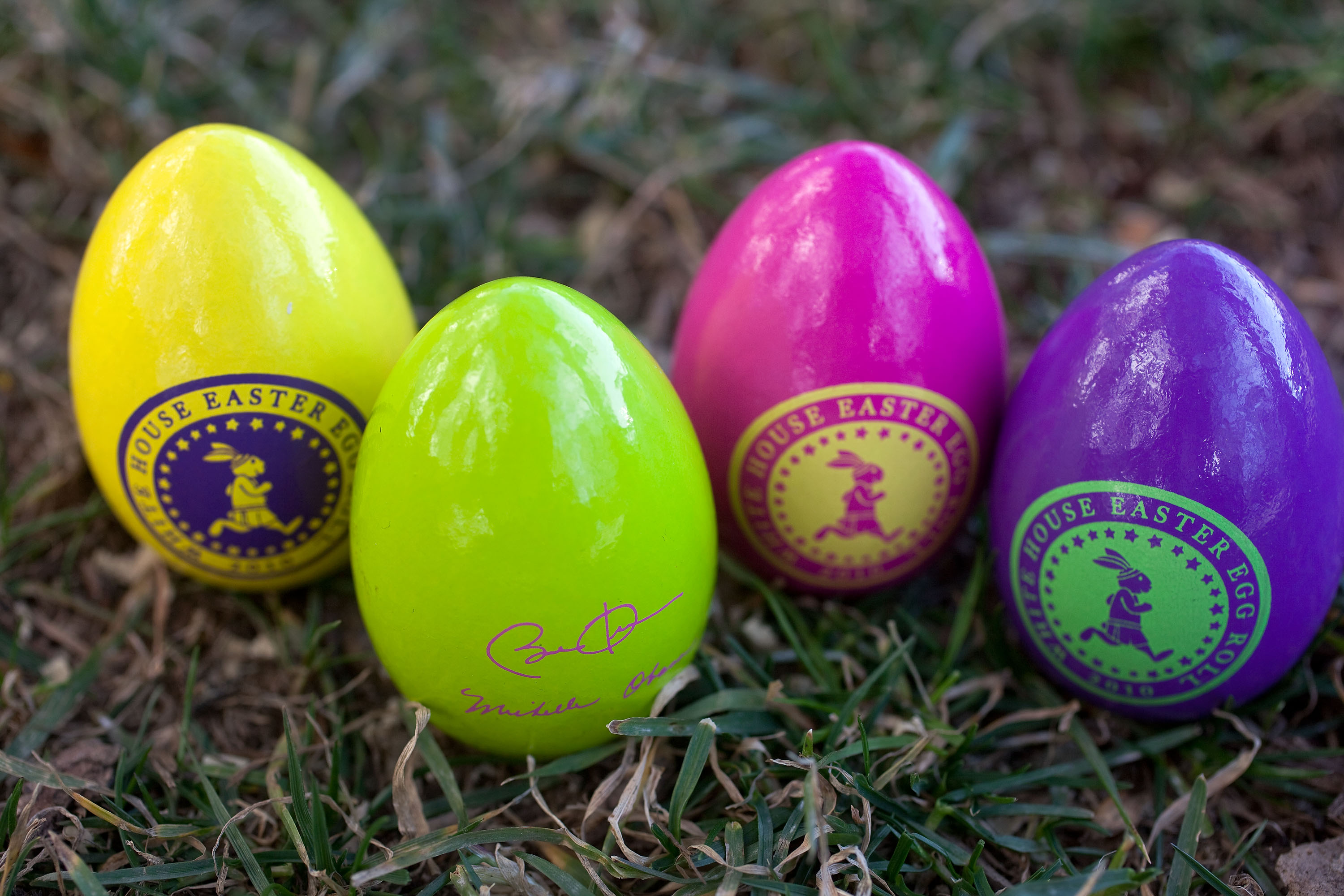 6) The eggs are available in four unique colors – purple, pink, green, yellow – and include the stamped signatures of the President and First Lady
7) The wooden eggs are produced through a process of wood turning and barrel dying

8) 14,500 hard-boiled and dyed eggs will be used between the egg roll and the egg hunt, and an additional 4,500 hard-boiled eggs will be provided for the egg dying station on the South Lawn
9) “Chirping eggs” will be part of the Egg Hunt, to accommodate guests with visual impairments
10) The Official Souvenir Wooden Egg is given to all children at the event age 12 and younger
11) A total of 135,000 Souvenir wooden eggs were produced for this year’s event
12) The National Park Foundation produces the White House Easter Eggs and they are available for sale at: www.easter.nationalparks.org

13) The activities are centered on the theme “Ready, Set, Go!” encouraging healthy and active living in coordination with the First Lady’s Let’s Move! initiative. Some of the activities include:
14) Football – NFL players will teach children to catch and throw, as well as coach them through an obstacle course to test their new skills
15) Family Farmer’s Market – a look at healthy eating with celebrity chef demo stations.
16) Make Your Own Garden – using the White House Kitchen Garden as the inspiration, children can make a seeding cup to take their own garden home to grow
17) Softball, Golf, Soccer, Basketball and Tennis – Children will have the opportunity to learn the fundamentals of sports from professional athletes
18) Hop To It! – A non-stop dance station at the White House complete with hula hoops and dance workshops
19) Eggspress Yourself – an arts and crafts area where children can do everything from egg dying to making “Medals of Eggsellence” to spend the day looking like Olympians
20) The White House Easter Egg classics will also be back this year. These activities include the Egg Hunt, the Storytime Stage and, of course, the traditional Easter Egg Roll
21) The Egg Roll is accessible to children in wheelchairs with the addition of wheelchair matting
22) Books that will be read on the Storytime Stage were checked out from DC public libraries. And they will all be returned on time!
23) Don’t worry, sweets are still a part of the Easter Egg Roll. This year’s goody bags will include Hershey’s chocolates and Peeps

35) The White House held a local poster competition and invited DC, Maryland and Virginia schools to submit their ideas. Submissions came in from 44 area schools
36) The First Lady selected the winning designs
37) This year’s co-winners are siblings. The program cover was designed by Kayleigh Geibel, a third grader at Dayton Oaks Elementary School. The other co-winner is Devin Geibel, a fifth grader from Dayton Oaks Elementary. Devin’s artwork serves as the 2010 Official Easter Egg Roll Poster. Dayton Oaks Elementary school is located in Howard County, MD
38) Kayleigh and Devin will be attending the White House Easter Egg Roll, along with their classes and teachers

39) All goody bags are made from 100% recycled plastic
40) The goody bags will include a brochure on healthy eating
41) The Sustainable Forestry Initiative (SFI) - certified packaging of the eggs, made from recyclable paperboard, was designed to minimize waste and environmental impact
42) For the second year in a row, the souvenir egg is made from Forest Stewardship Council (FSC) - certified, U.S. hardwood
43) Recycling bins will be placed throughout the South Lawn and the Ellipse
44) Many of the fruits and vegetables for this year’s event were organically grown
45) Food scraps from the Play with Your Food station will be composted – a first for the Easter Egg Roll

46) 7 American Sign Language (ASL) interpreters and 6 nurses will volunteer at this year’s event
47) The White House Easter Egg Roll is made possible by the hard work of close to 1,200 volunteers
48) All volunteers attended at least one training session and some traveled from as far away as Texas to be part of this year’s event
49) Volunteers come from the White House, the Administration and interested citizens from across the DC metro area or beyond
50) Many volunteers will arrive for their shifts as early as 5:00 AM to help get the Easter Egg Roll rolling!