Did 'Cash-for-Clunkers' work as intended?

April 5, 2010 at 8:42 PM ET by Christina Romer & Christopher Carroll
Twitter Facebook Email
Summary:
The Council of Economic Advisers examines the impact and effectiveness of the Cash for Clunkers program.

On June 24, 2009, President Obama signed into law the Car Allowance Rebate System (CARS, commonly known as 'Cash-For-Clunkers'), one of several stimulus programs whose purpose was to shift expenditures by households, businesses, and governments from future periods when the economy is likely to be stronger, to the present when the economy has an abundance of unemployed resources that can be put to work at low net economic cost.

Critics of the CARS program argued that it would have little ultimate effect because most of the purchases under the program would have happened soon anyway - they were merely 'pulled forward' from the following few months.  In contrast, the CEA's September 10 economic analysis of the program argued that a substantial proportion of the CARS sales were pulled forward from a far more distant future, and thus represented an important increment to aggregate demand at just the time when such demand was sorely needed. 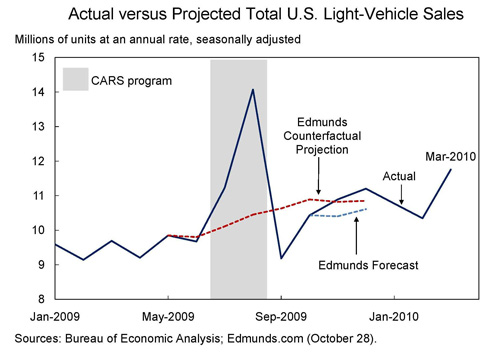 Download the data in this chart as a CSV file.

With seven months of post-Clunkers sales data in hand (September 2009 through March 2010; see dark blue line in figure), now seems a good time for a reckoning.

The 'short-term pull-forward' view was perhaps most vigorously articulated by automotive industry website Edmunds.com.  In late October, Edmunds.com made a widely-reported forecast for the pace of sales in the last quarter of the year:  According to Edmunds, light motor vehicle sales in November and December would be only about 10.5 million at an annual rate (the dashed blue line in the figure).  Edmunds furthermore argued that, had the CARS program not existed, the pace of sales would have been higher, about 10.8 million, during those two months (the dashed red line in the figure).

But according to the final data now in hand, the actual pace of sales in November and December was about 11.0 million units (the solid blue line in the figure substantially exceeds Edmunds' October 28 forecast).  Last Thursday's announcement of a strong pace of sales in March also belies Edmunds' pessimistic trajectory.  Indeed, over the seven months following the end of the CARS program in late August, the sales pace has averaged 10.7 million units at an annual rate, much higher than the 9.6 million pace in the three months that preceded the program, and considerably stronger than the forecasts made by private forecasters just before enactment of the CARS program.

A final source of evidence on size and timing of the 'pull forward' effect comes directly from the people who purchased a vehicle under the program.  According to a survey conducted by the Department of Transportation as part of the program, the average timeframe over which new car purchasers said they would have otherwise sold, traded in, or disposed of their old vehicle was 2.87 years - far longer than the timeframe of a few months that the program's critics hypothesized.  A plausible interpretation of the available data, in fact, is that many of the CARS sales were to the kinds of thrifty people who can afford to buy a new car but normally wait until the old one is thoroughly worn out.  Stimulating spending by such people is very nearly the best possible countercylical fiscal policy in an economy suffering from temporarily low aggregate demand.