This afternoon, before beginning a meeting with the President Economic Recovery Advisory Board, President Obama described the coming debate over Wall Street Reform in stark terms.  The President said, "I hope that we can pass a bipartisan bill.  Bipartisanship cannot mean simply allowing lobbyist-driven loopholes that put American taxpayers at risk."  Leaving no doubt that he was serious, when asked whether he would veto legislation that did not reign in derivatives and other risky ventures that massive banks gamble with, he answered, "I will veto legislation that does not bring the derivatives market under control and some sort of regulatory framework that assures that we don’t have the same kind of crises that we’ve seen in the past."

He explained that the time is over when big banks can bend government to their will:

We can’t allow history to repeat itself.  Never again should American taxpayers be forced to step in and pay the price for the responsibility of speculators on Wall Street who made risky bets with the expectation that taxpayers would be there to break their fall.  And we can’t leave in place a tattered set of rules that will allow another crisis to develop without the tools to deal with it.  And that’s why I expect that we are going to have a strong reform proposal that demands new accountability from Wall Street and provides new protections for consumers.

This is reform that will force banks and financial institutions to pay for bad decisions that they make, and not have taxpayers pay for those bad decisions.  And that means no more bailouts.

This reform would also bring new transparency and accountability to the derivatives market, and this is something that Paul Volcker spoke publicly about just the other week.  The derivatives market is where a lot of the big, risky financial bets by companies like AIG took place.  There are literally trillions of dollars sloshing around this market that basically changes hands under the cover of darkness.  When things go wrong, as they did in AIG, they can bring down the entire economy, and that’s why we’ve got to bring more transparency and oversight when it comes to derivatives and bring them into a framework in which everybody knows exactly what’s going on, because we can’t afford another AIG.

Now, let’s be honest.  Some in the industry are not happy with the prospect of these reforms.  We’ve seen the usual army of lobbyists dispatched up on Capitol Hill.  They have found some willing allies on the other side of the aisle in Congress who have been trying to carve out a lot of exceptions and special loopholes so that folks on Wall Street can keep making these risky bets without any oversight.

I hope that we can pass a bipartisan bill.  Bipartisanship cannot mean simply allowing lobbyist-driven loopholes that put American taxpayers at risk.  That would not be real reform.

So in the coming weeks, every member of Congress is going to have to make a decision:  Are they going to side with the special interests and the status quo, or are they going to side with the American people?  And anyone who opposes this reform is going to be leaving taxpayers on the hook if a crisis like the one that we’ve just seen ever happens again.  And I consider that unacceptable. 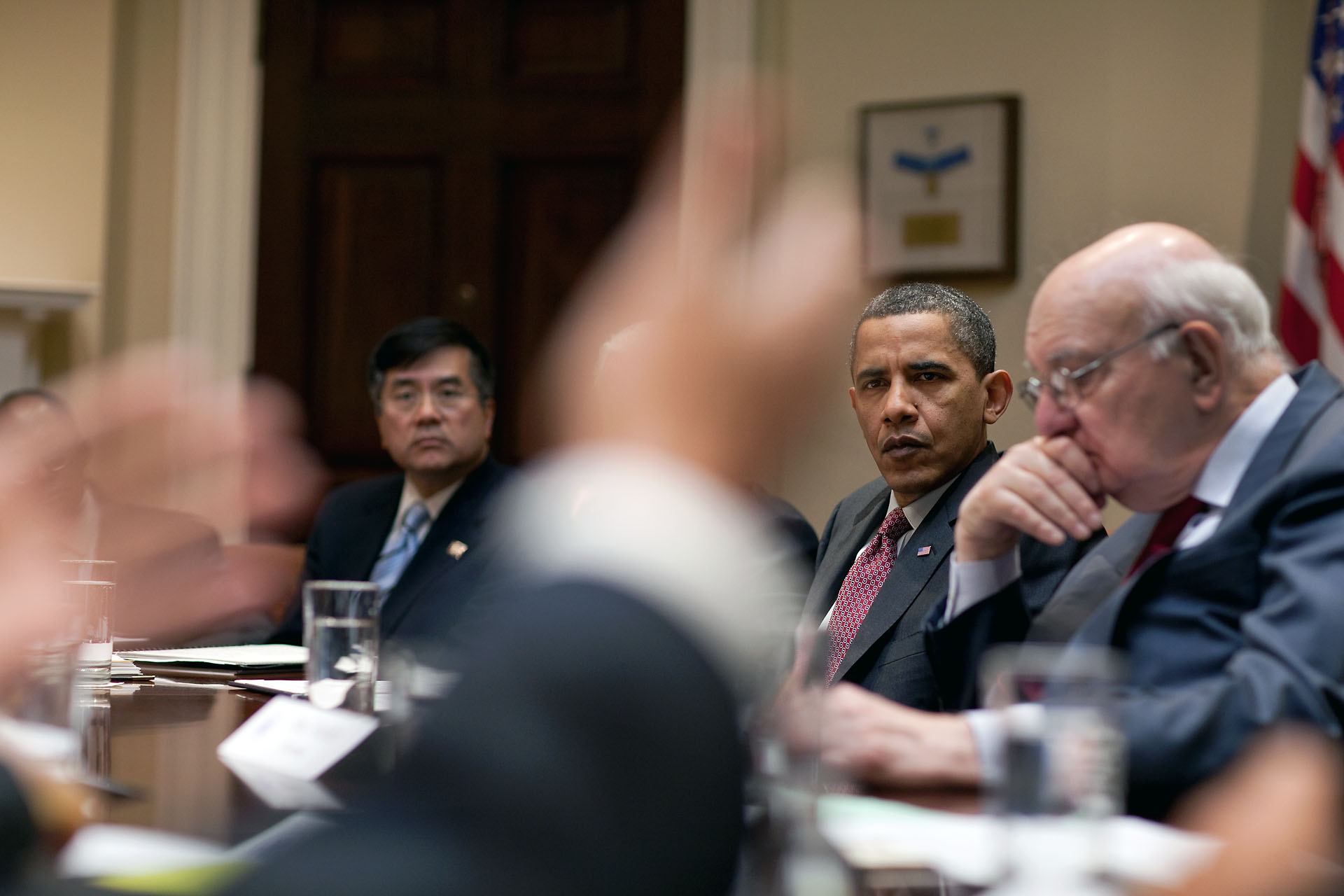 President Barack Obama listens the discussion during a meeting with the President's Economic Recovery Advisory Board in the Roosevelt Room of the White House. Commerce Secretary Gary Locke is seated at left and Paul Volcker, Chair of the President's Economic Recovery Advisory Board, is at right. April 16, 2010. (Official White House Photo by Pete Souza)