To the Families of Upper Big Branch Mine: "Our Hearts Ache Alongside You"

April 25, 2010 at 8:43 PM ET by Jesse Lee
Twitter Facebook Email
Summary:
The President and the Vice President travel to West Virginia for a memorial service for the miners lost in the tragedy at Upper Big Branch mine.
[[nid:11441]]

Today the President and the Vice President were in West Virginia attending a memorial service for the miners lost in the tragedy at Upper Big Branch mine. President Obama delivered a eulogy honoring the lives of those who perished and offering his deepest condolences to the loved ones they left behind. 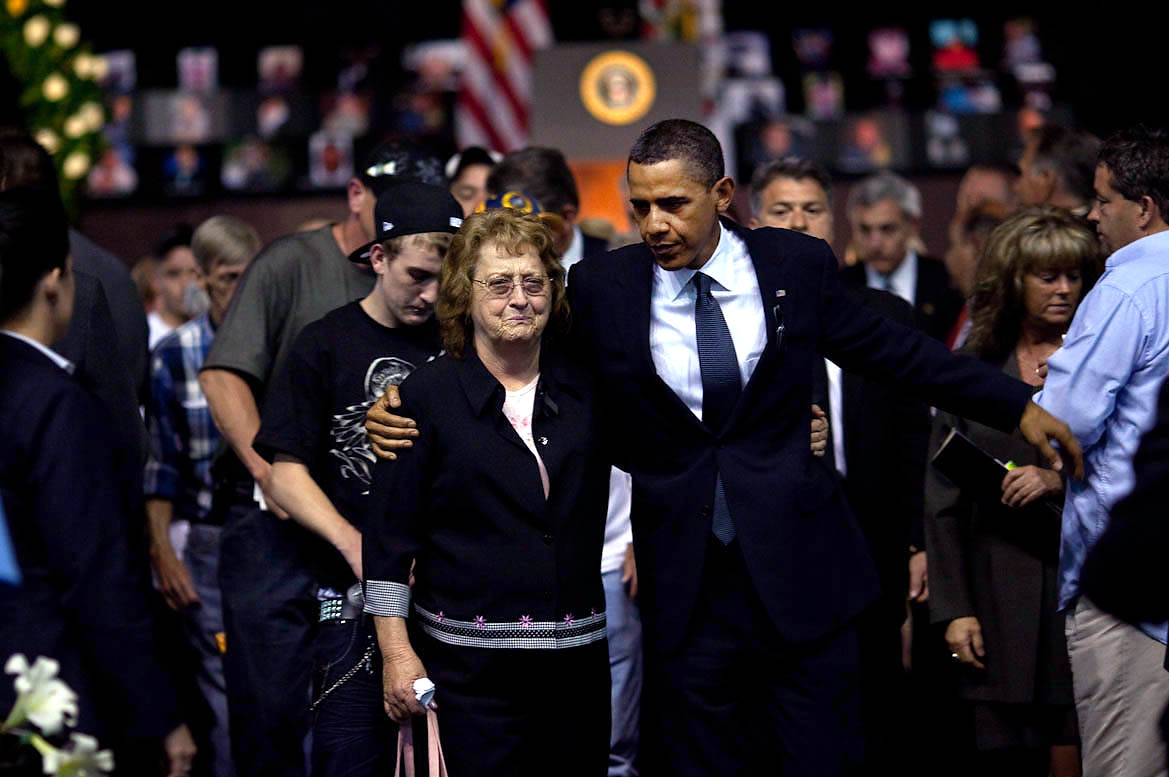 President Barack Obama walks with Linda Davis, the grandmother of deceased miner Cory Davis, during a memorial for the victims of the Upper Big Branch Mine explosion in Beckley, W.Va., April 25, 2010. (Official White House Photo by Pete Souza)

To every member of every family that has been touched by this tragedy, I can say that I know what it’s like to lose a spouse and a child.  And I also know when the tributes are done and the flags are once again flying at full-staff, once the miners you see today go back to work, that's when it will be the hardest for you all.  When life has moved on around us, but is yet to stir within you, that's when you're most going to need one another.

He concluded his remarks saying, "I can tell you from my own personal experience that eventually the painful heartache you feel will be replaced by the joyful memory of the ones you love so dearly.  My prayer for you is that that day will come sooner than later." 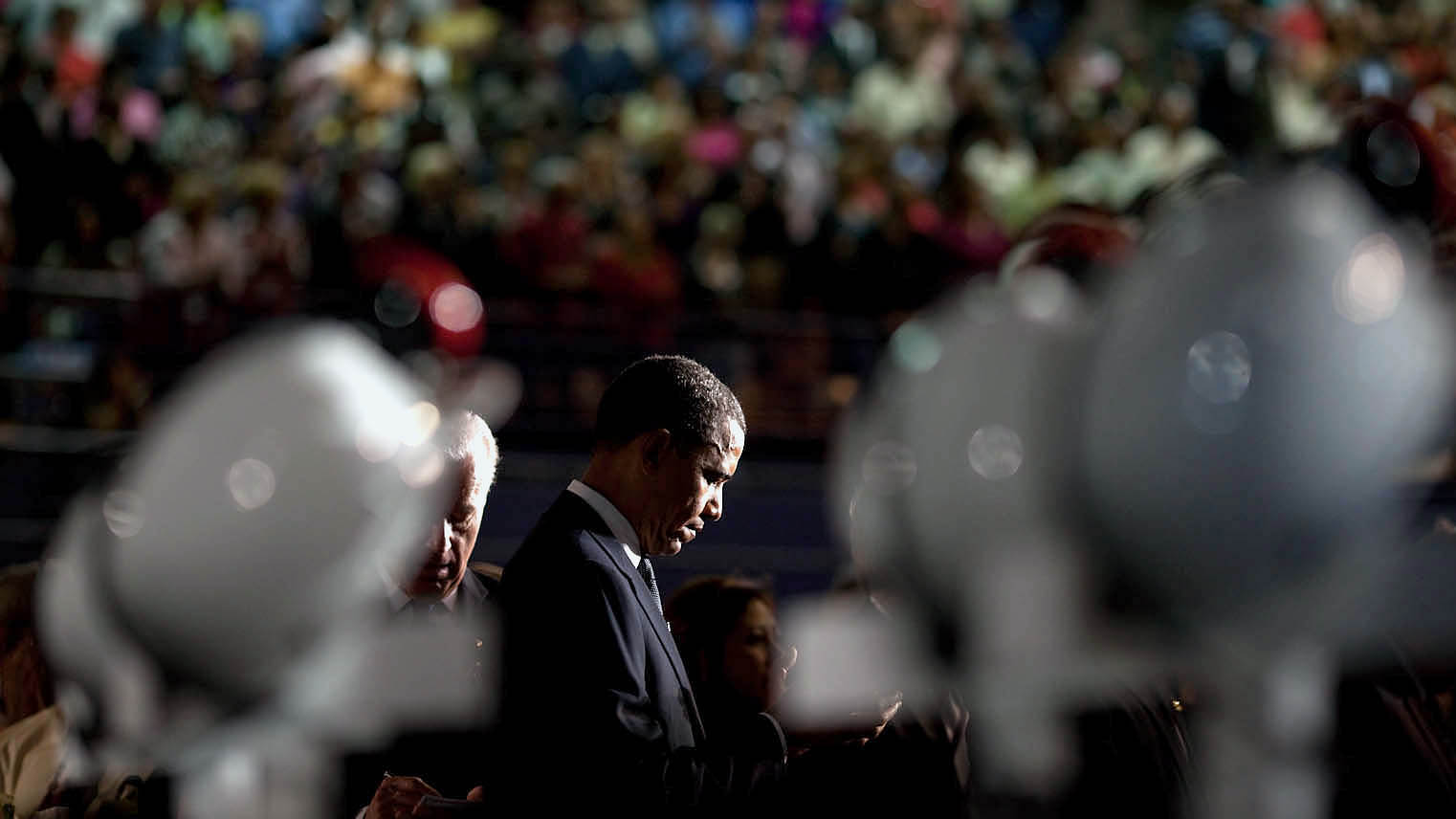 The President's remarks in full:

Nothing I, or the Vice President, or the Governor, none of the speakers here today, nothing we say can fill the hole they leave in your hearts, or the absence that they leave in your lives.  If any comfort can be found, it can, perhaps, be found by seeking the face of God -- (applause) -- who quiets our troubled minds, a God who mends our broken hearts, a God who eases our mourning souls.

Even as we mourn 29 lives lost, we also remember 29 lives lived.  Up at 4:30 a.m., 5:00 in the morning at the latest, they began their day, as they worked, in darkness.  In coveralls and hard-toe boots, a hardhat over their heads, they would sit quietly for their hour-long journey, five miles into a mountain, the only light the lamp on their caps, or the glow from the mantrip they rode in.

These men -– these husbands, fathers, grandfathers, brothers sons, uncles, nephews -– they did not take on their job unaware of the perils.  Some of them had already been injured; some of them had seen a friend get hurt.  So they understood there were risks.  And their families did, too.  They knew their kids would say a prayer at night before they left.  They knew their wives would wait for a call when their shift ended saying everything was okay.  They knew their parents felt a pang of fear every time a breaking news alert came on, or the radio cut in.

But they left for the mines anyway -– some, having waited all their lives to be miners; having longed to follow in the footsteps of their fathers and their grandfathers.  And yet, none of them did it for themselves alone.

All that hard work, all that hardship, all the time spent underground, it was all for the families.  It was all for you.  For a car in the driveway, a roof overhead.  For a chance to give their kids opportunities that they would never know, and enjoy retirement with their spouses.  It was all in the hopes of something better.  And so these miners lived -– as they died -– in pursuit of the American Dream.

That’s a spirit that’s reflected in a song that almost every American knows.  But it’s a song most people, I think, would be surprised was actually written by a coal miner’s son about this town, Beckley, about the people of West Virginia.  It’s the song, Lean on Me -– an anthem of friendship, but also an anthem of community, of coming together.

That community was revealed for all to see in the minutes, and hours, and days after the tragedy.  Rescuers, risking their own safety, scouring narrow tunnels saturated with methane and carbon monoxide, hoping against hope they might find a survivor. Friends keeping porch lights on in a nightly vigil; hanging up homemade signs that read, “Pray for our miners, and their families.”  Neighbors consoling each other, and supporting each other and leaning on one another.

I’ve seen it, the strength of that community.  In the days that followed the disaster, emails and letters poured into the White House.  Postmarked from different places across the country, they often began the same way:  “I am proud to be from a family of miners.”  “I am the son of a coal miner.”  “I am proud to be a coal miner’s daughter.”  (Applause.)  They were always proud, and they asked me to keep our miners in my thoughts, in my prayers.  Never forget, they say, miners keep America’s lights on.  (Applause.)  And then in these letters, they make a simple plea:  Don’t let this happen again.  (Applause.)  Don't let this happen again.

How can we fail them?  How can a nation that relies on its miners not do everything in its power to protect them?  How can we let anyone in this country put their lives at risk by simply showing up to work; by simply pursuing the American Dream?

“Even though I walk through the valley of the shadow of death, I will fear no evil, for You are with me; your rod and your staff, they comfort me.” 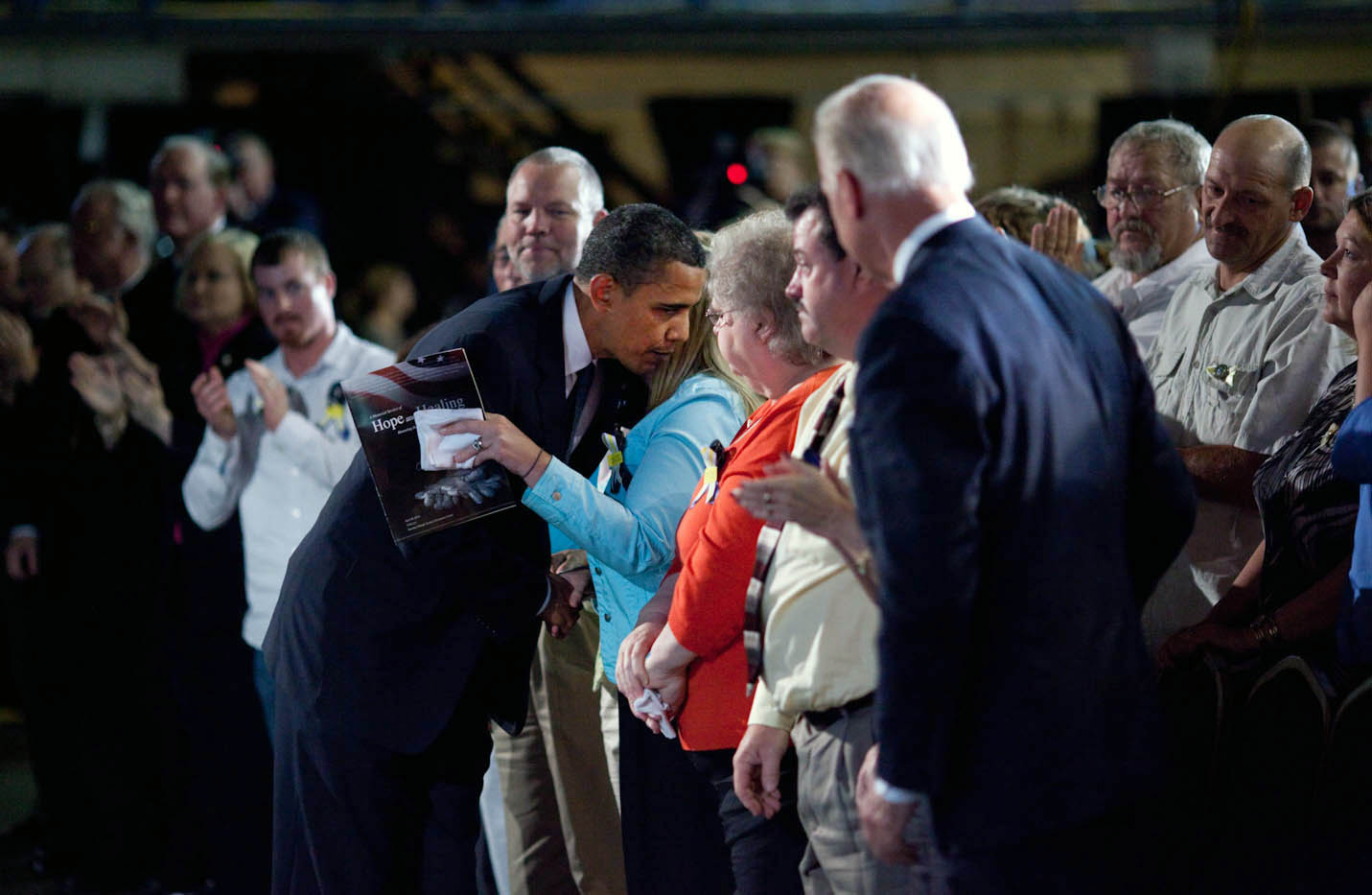