Room 18, A New Home to the National Medal of Science

April 29, 2010 at 10:30 AM ET by
Twitter Facebook Email
Summary:
President Obama's commitment to improving the Nation's education system, especially in science, technology, engineering, and math, can be seen in the wide array of events and initiatives the President has taken part in. However, the President's commitment can only be the beginning. Ms. Caitlin McCabe, a fifth grade teacher at Oak Grove Elementary School, highlights for us an example of a creative way to engage her students.

President Obama's commitment to improving the Nation's education system, especially in science, technology, engineering, and math, can be seen in the wide array of events and initiatives the President has taken part in, including Astronomy Night at the White House, the launch of the Educate to Innovate campaign, and bringing science into this year's White House Easter Egg Roll.

However, the President's commitment can only be the beginning. The real work starts with our Nation's teachers and students at all levels—especially early on. That's why we would like to highlight a unique and innovative lesson plan developed by Caitlin McCabe, a fifth grade teacher at Oak Grove Elementary School in Poughkeepsie, NY. We wanted to share Ms. McCabe's idea with people across America to inspire similar novel concepts.

Ms. McCabe thought of a great way to get her students engaged and interested in science by focusing on the National Medal of Science Awards administered for the White House by the National Science Foundation (NSF). She and her class created their own Medal of Science Award process in which each student researched and learned about a different famous scientist and then drafted a formal nomination as though it was to be submitted to the NSF. In fact, they went the extra mile and actually DID send in their nominations to the NSF, making their best case for why Ralph Baer (widely known as "The Father of Video Games"), Bill Gates, Marie Curie, and other icons should win the coveted Presidential award.

And who says Government is unresponsive? Mayra Montrose, Program Manager for the National Medal of Science at NSF, answered all of the nomination letters with personalized responses, thanking them for their nomination. She also provided NSF patches and rulers to each student. In the end, it was the students themselves who chose the winners: first place, Baer; second place, Walt Disney; and third place, Hippocrates.

Along with the photos (all courtesy of Ms. McCabe), we have included the lesson plan developed by Ms. McCabe, student score sheet, student letters and "biopoems" about their nominees, as well as Montrose's letters back to the students. Additionally, we got in touch with Ms. McCabe and asked her a few questions about how and why she developed such an interesting program: 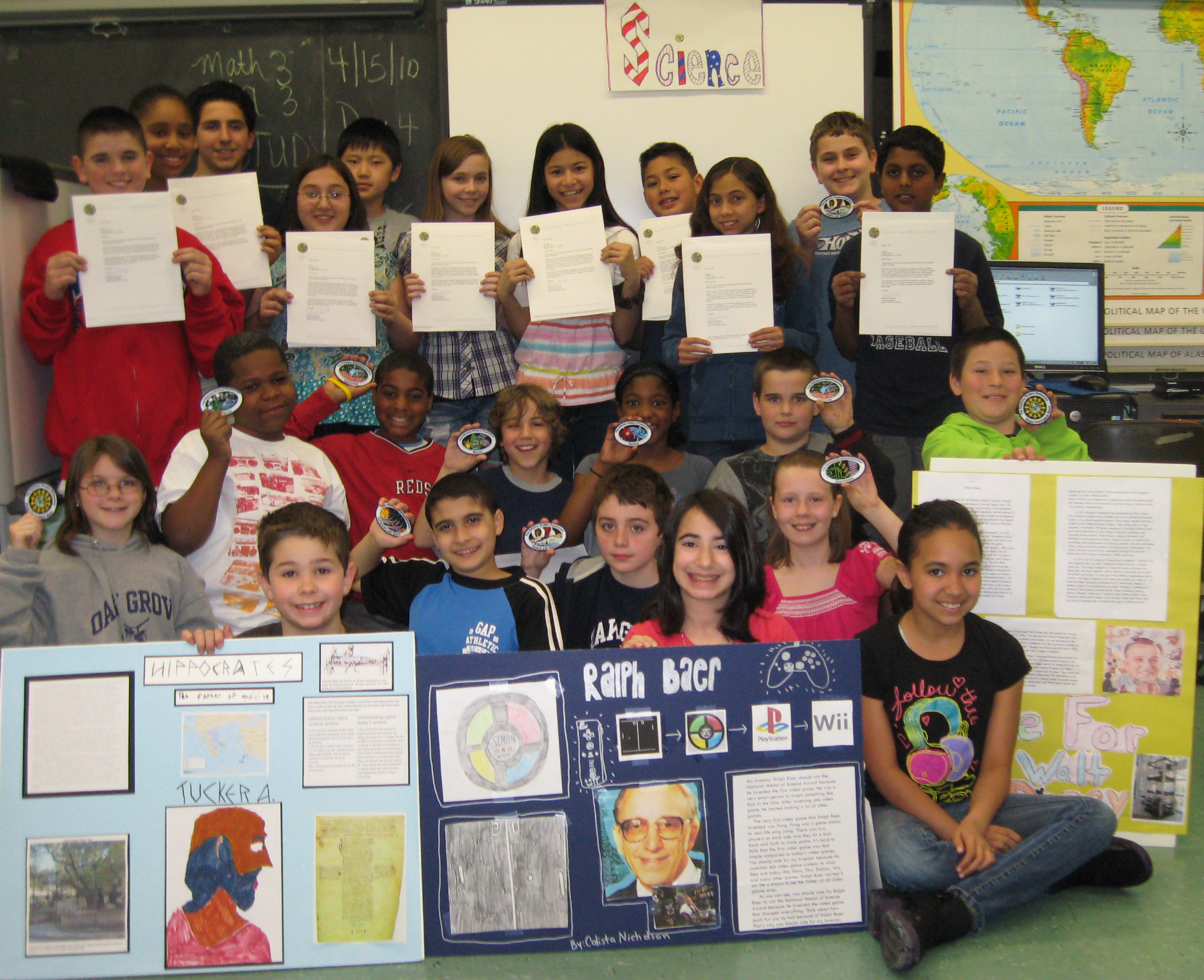 This photo of Ms. Caitlin McCabe's fifth grade class at Oak Grove Elementary School shows some of the posters the students created as well as the letters and patches they received from the National Science Foundation.

I feel this project has a real life application for students. Researching a nominee for the National Medal of Science award allows my students to have a purpose when they are doing the assignment. I want my students to do their assignments because they feel a connection to the assignment, not just because “I told them to do it.” I also think it’s a valuable way for my girls in particular to see good examples of leaders in the areas of math, science, and technology (MST). This project allows all my students, girls and boys, to research important women and men who have enriched the areas of MST.

2. What exactly was the assignment?

The assignment was to plan, design, and present a poster that will persuade their classmates to vote for their scientist/inventor for the “Room 18 National Medal of Science Award." The poster must include: a colorful illustration that represents their inventor/scientist and a three-paragraph essay persuading people to vote for their nominee. The culmination of the poster project was an oral presentation in front of the class describing what they have learned about their inventor/scientist and why their classmates should vote for them. As an extension of the project, I had each child write a biopoem, which gives biographical information about their nominee, and a persuasive business letter to the program manager of the National Medal of Science Award at the National Science Foundation.

3. How did your students respond to this approach? Was there a sense of competition among them? Did they have fun?

The students enjoyed this project very much and were definitely competitive with each other. Two weeks before the presentations, students started to “campaign” for their inventor/scientist to be chosen as the winner. They created and wore persuasive T-shirts, wrote acrostic poems, and hung signs in the classroom. They did everything they could to promote their inventor/scientist’s accomplishments in an effort to get their classmates to pick their scientist as the winner of “Room 18 National Medal of Science Award."

4. At what point did you or the students actually make contact with the National Science Foundation, which administers these awards for the White House? What kind of response did you get?

I went to the website for the National Science Foundation and found an e-mail address for Ms. Myra Montrose, Program Manager of the National Medal of Science. I sent her an e-mail in December 2009. I told her of my project and my intention to have my students write her persuasive business letters regarding their nominees for “Room 18 National Medal of Science Award.”  She responded immediately and was very receptive and encouraging of the idea. She actually sent an e-mail to the class regarding potential candidates they might want to consider. The letters written by the students were sent to Ms. Montrose at the end of March. She responded by sending back to each student an individualized business letter personally from her, as well as a National Science Foundation patch and hologram ruler. Every student was very proud and honored to receive this personal attention from someone in the science community. Moreover, she reinforced one of the objectives that I wished to achieve by doing this project: In all the letters she sent to my girls, she mentioned that math, science, and engineering are excellent career choices for girls.

5. How were winners selected?

Each student was given a “log” to be completed while his or her classmates were presenting. This “log” of the presentations included the inventor/scientist's name, two things they learned about the nominee during the presentation, and, finally, they gave a rating for each nominee from 1-4, with 4 being the highest rating. After all the nominees were presented, the students chose two winners. Two winners were picked per student because each student usually votes for their own inventor/scientist and then another student's.  Obviously, I give a grade to each student for the project, but the class gets to pick the winner of “Room 18 National Medal of Science Award.”

6. Can you relate an anecdote or two that might help readers appreciate what it was like as students worked to the final judging? Things that happened that were funny, or disasters that happened, that ultimately enriched the project experience?

Many students have come to understand that "sweetening the deal" is a good move. Many children bring things in to hand out to the class during the oral presentation. Of course, the student that presented Milton Hershey had to bring in some Hershey’s chocolate for the class. Other examples of innovative presentations include the student who presented Samuel Morse; she culminated her presentation by writing out a message in Morse code on the chalkboard for the class to translate. When translated, it said “SAMUEL MORSE IS YOUR WINNER.” When Orville and Wilbur Wright were nominated, the student brought his brother to class for the oral presentation--dressed in period clothing--and they performed a skit. I had one student who nominated Alexander Graham Bell for the telephone actually record his oral presentation on an answering machine and play it for the class. This year the girl who won nominated Ralph Baer. She baked a cake for her presentation in the shape of his Simon Game.

7.  What are the main take-home messages from your experience using this approach, as opposed to conventional science-class assignments, in terms of generating student interest in science?

As far as I am concerned in order for students to understand Math, Science and Technology, they have to have a connection with the content area. This project allows my students to learn about inventors/scientists who are important and influential to our society and how they are connected to their every day lives. The assignment creates an atmosphere requiring them to be a “champion” for their nominee and prove that they are worthy of the award. In addition to this, adding the competition aspect completely connects the student to the assignment. Once the project is underway, I find that the student’s motivation is not about doing the “school work” but more about representing this important person to the best of their ability. I often hear students talking to their classmates about their nominee, and in turn hearing from their classmates certain facts and information regarding why they think their nominee is more worthy of winning. I feel this project puts the students in charge of their learning process. Not only are they learning about Science and Technology during the process, but also English Language Arts is incorporated throughout the assignment. Does the grade matter to them? Of course, but doing their best work matters more! 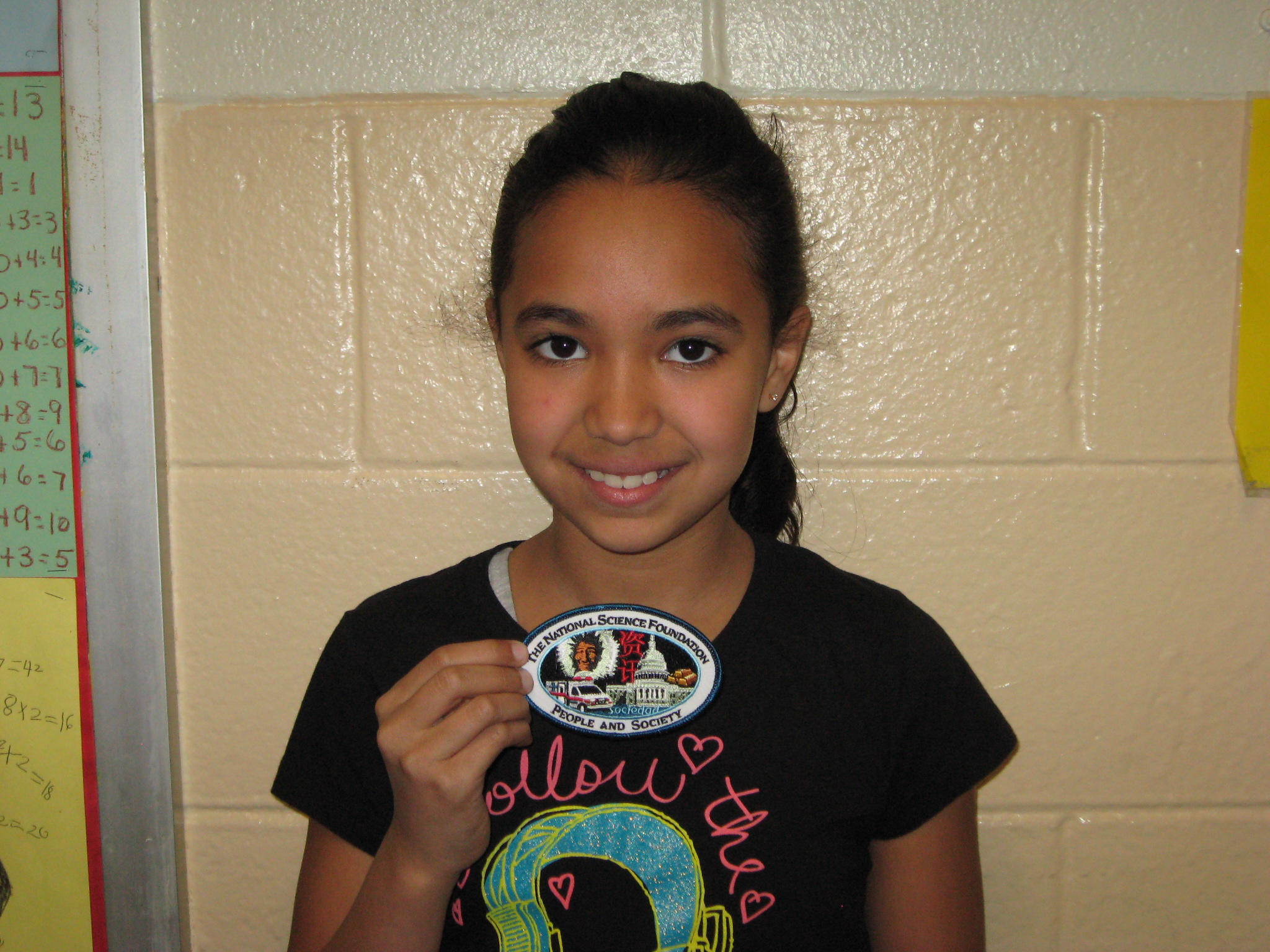 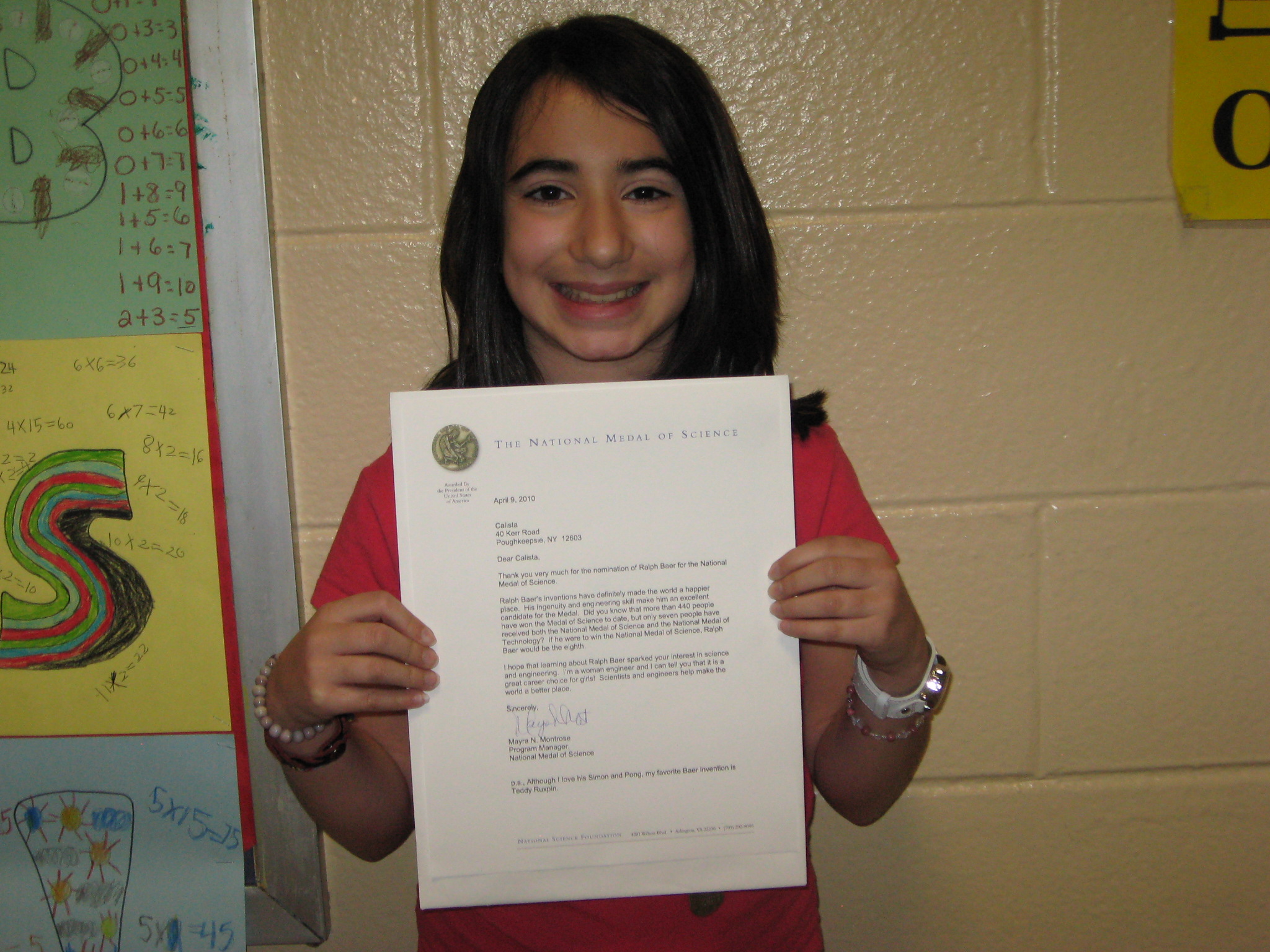 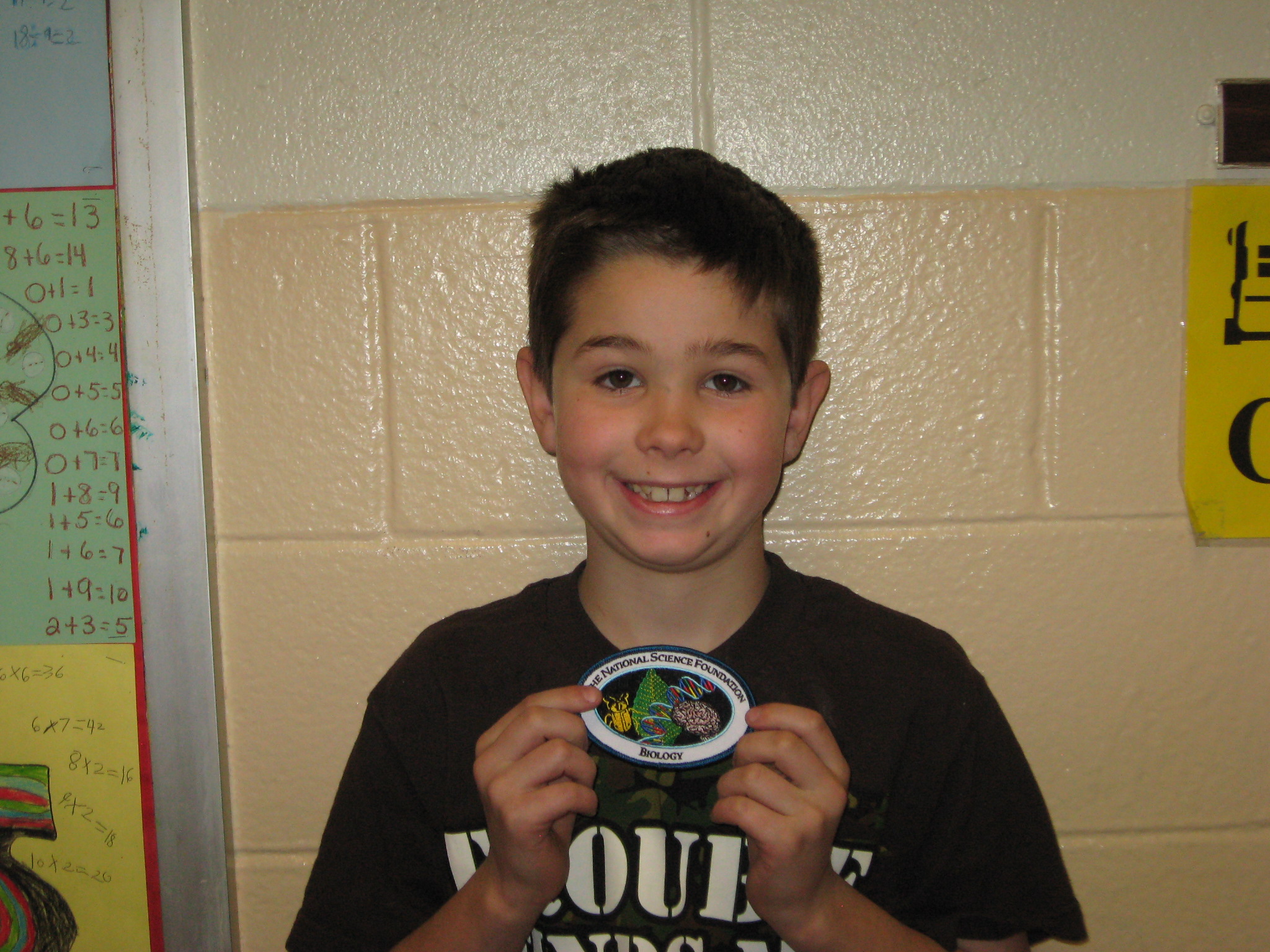 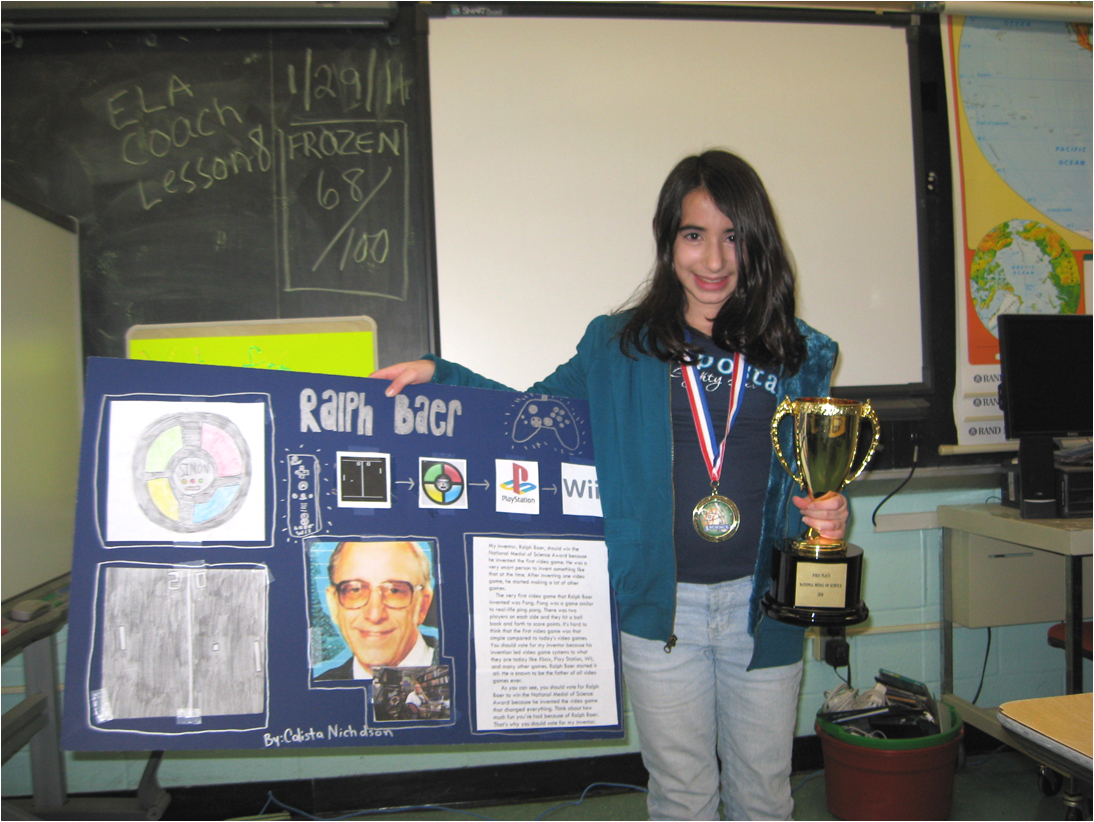 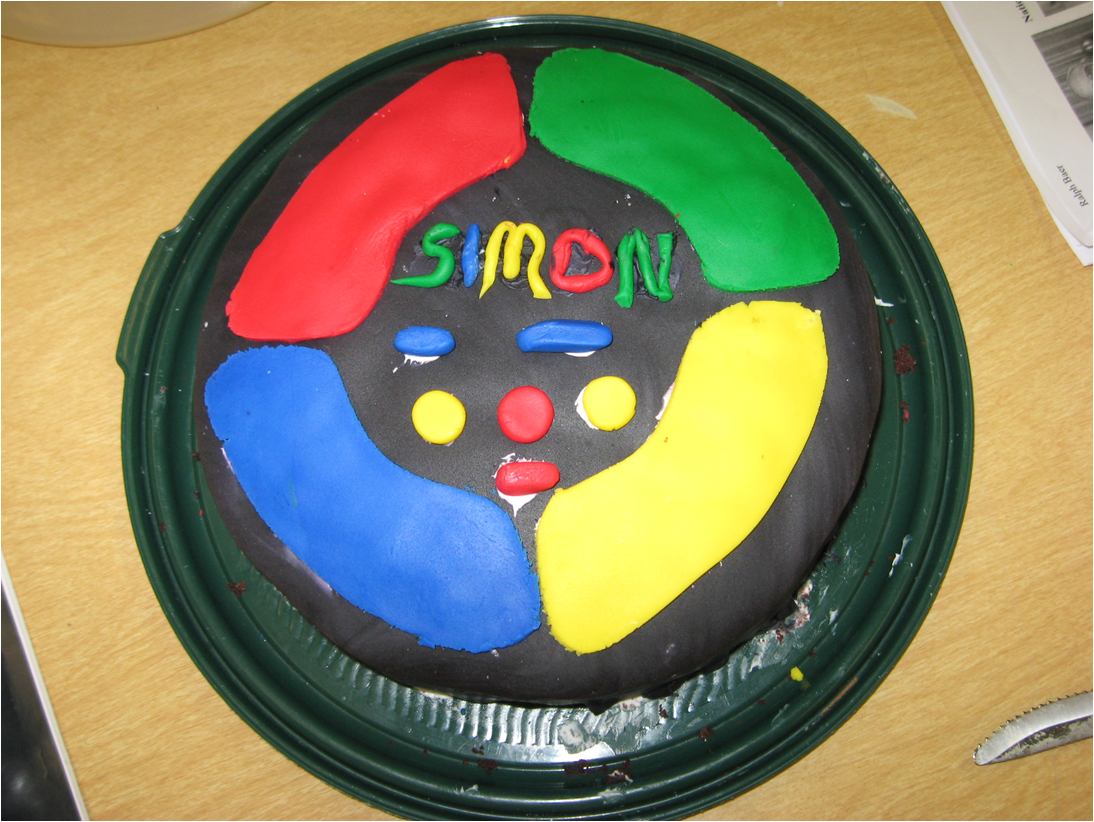 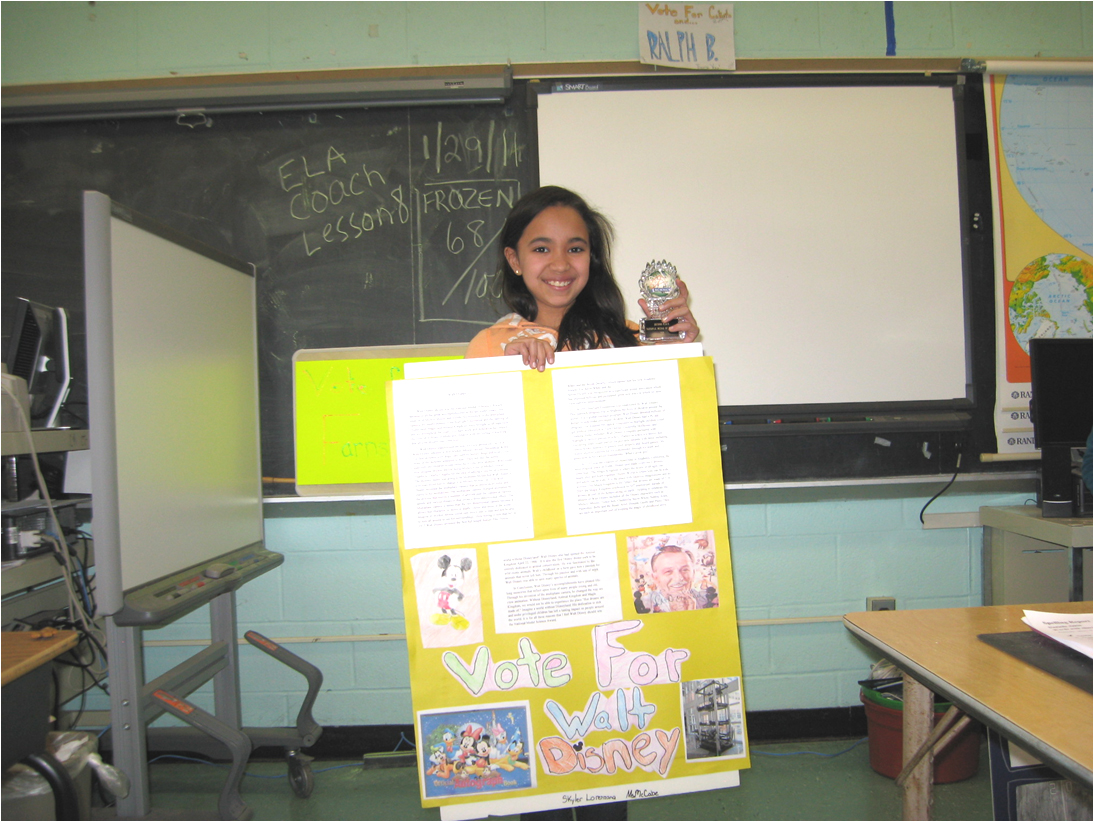 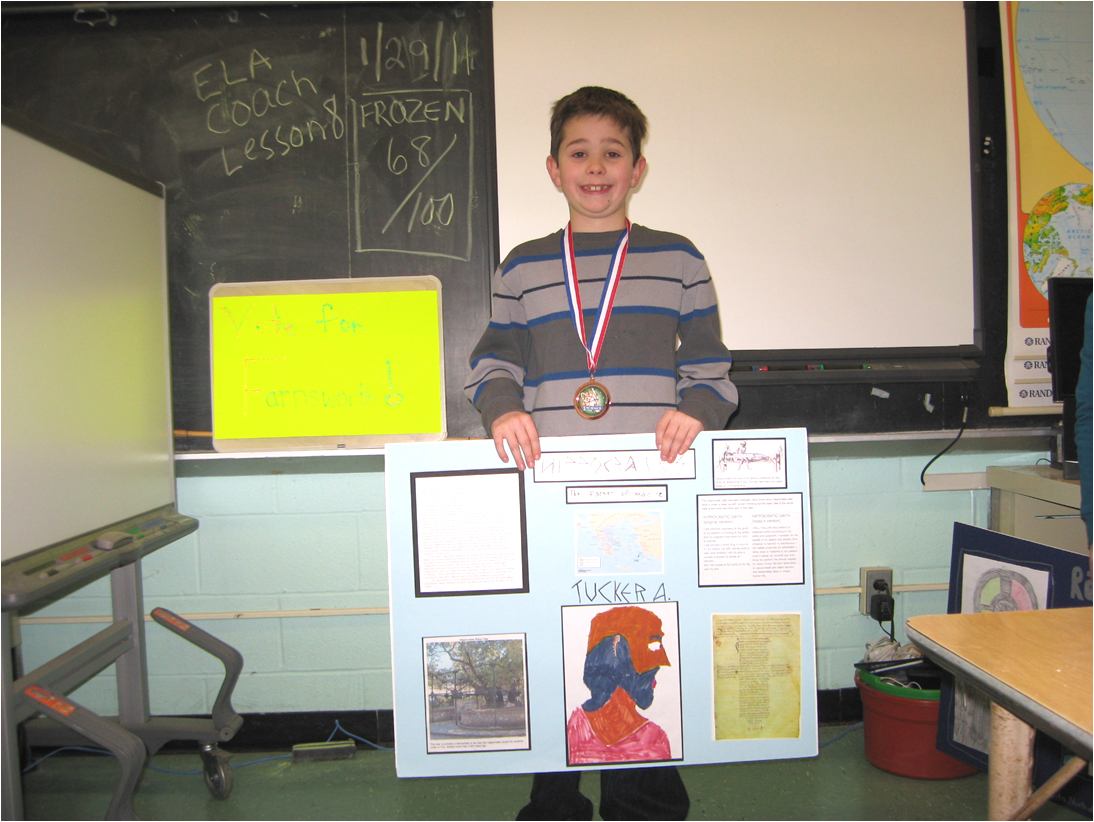