We are continuing our live blogging from today's summit on Promoting Innovation: Prizes, Challenges and Open Grantmaking. The lunch time session was an interview of Vivek Kundra, the U.S. Chief Information Officer, by Micah Sifry, co-founder of the Personal Democracy Forum. The interview captured the vision for the Prizes and Challenges Guidance issued by OMB on March 8, 2010.

Sifry stared off the interview asking Kundra to share his experience running his first challenge approximately two years ago in the District of Columbia. Kundra said that his experience then launching Apps for Democracy gave him more insight into transforming government by simultaneously experimenting with novel procurement processes and, at the same time, engaging the public. Traditionally there have only been two mechanisms, contracts or grants, to drive and unearth innovation from the public sector. Apps for Democracy was an experiment showing that we could find a third way to solving public sector problems – through prizes and challenges. In that case Apps for Democracy received over 40 applications within 30 days, which would have taken much longer under a normal procurement process. In addition it was forecasted that the government saved over $3.6 million from the applications that were created!

In response to being asked about the vision for the Prizes Guidance, Kundra went on to talk about the more than $70 billion the US Government spends on information technology in the context of a public that expects the efficiency and seemlessness of private sector transactions from sites like Open Table and many others.  The vision for this new guidance is to re-think the traditional way in which IT and other projects are procured and to help drive intelligent investments that are responsive to citizen needs.

Kundra also pointed out that while we are in the early stages of implementing the Prizes and Challenges Guidance, the idea is to make it easier for agencies to solve problems with another strategy and set of tools. This set of tools doesn’t always have to involve a monetary prize. For example with the SAVE Award Kundra said:

We didn’t issue a challenge of $1 million, the prize was rather a meeting with the President which generated enormous response. We also want to make sure we have appropriate rules and regulations in place so that we are being good stewards of tax payer dollars… and the platform doesn’t have to be a sophisticated enterprise wide solution, it can be one that is something more lightweight and is a platform that best serves an agency’s mission.

The long-term goal for the guidance is to instill a notion of a participatory democracy in which you have citizens helping to solve some of the most difficult problems.  In a traditional procurement process, this wouldn’t occur. In addition, where feasible, it is important to engage the public in judging solutions while being aware of balancing the interests of hyperactive communities. Both Sifry and Kundra discussed the evidence that with relatively low amounts of prize funding people will be incentivized to self organize, form partnerships and drive innovative solutions. The guidance was disruptive by design and the President has been clear that he wants to get the best ideas for how government operates from anyone in the country because government should serve the American people. These ideas are not just about finding solutions, but also could be about uncovering problems or inefficiencies.

Vivek Kundra summed up the end of the interview by reiterating that prizes and challenges are being introduced in the government in a way in which the hope is that this mechanism becomes embedded as part of the culture and to push action beyond just grants or traditional procurement processes.

Following Vivek’s speech is a breakout of the 200 or so participants into 17 different lunch tables with wide ranging themes hosted by experts from inside and outside of government (such as NASA, DARPA, Global Giving, Sunlight Labs, Prize4Life, Knight Foundation and many more). The summit can be viewed live here on the Case Foundation website. 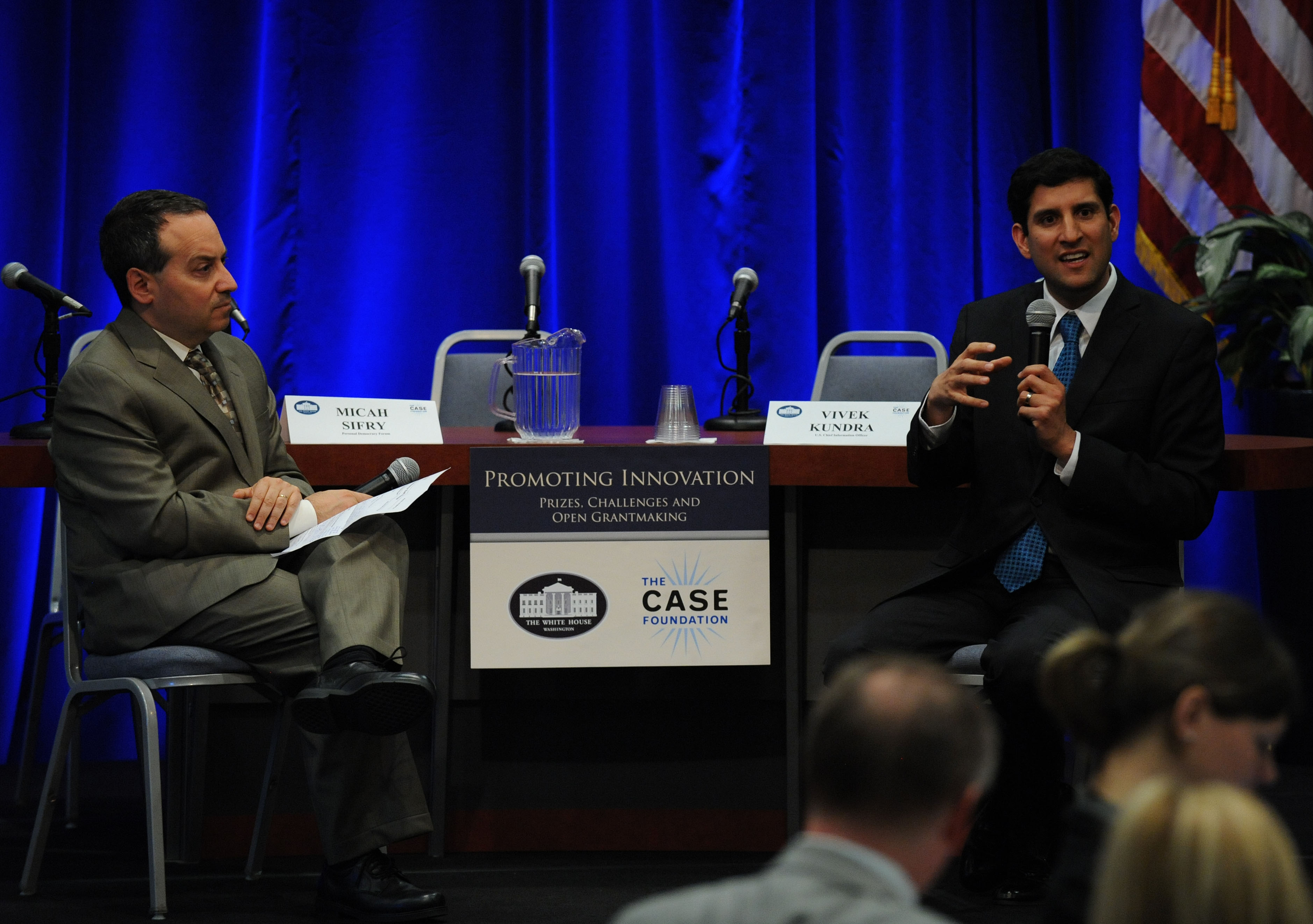