Live from the White House Summit on Promoting Innovation through Prizes, Challenges and Open Grantmaking

April 30, 2010 at 11:36 AM ET by Beth Noveck
Twitter Facebook Email
Summary:
At the summit on Promoting Innovation: Prizes, Challenge and Open Grantmaking, two leading experts on the use of prizes to solve problems addressed the assembled gathering.

At today's summit on Promoting Innovation: Prizes, Challenge and Open Grantmaking, two leading experts on the use of prizes to solve problems addressed the assembled gathering. Leaders from over thirty Federal agencies have come to learn about how to incorporate prizes and incentive-backed challenges into their work of addressing complex policy problems.

According to Diamandis, if a new prize is designed correctly it can bring 10-40 fold the size of the purse in innovation. Prizes also create a collaborative and open environment that stimulates innovation. Incentive backed challenges attract "maverick thinkers who challenge normal assumptions" and make heroes of the teams who compete in these paradigm-changing efforts to solve significant social problems like building the ultimate fuel-efficient car or developing a lunar landing vehicle.

The X-Prize Foundation has established X-Prize Labs at several universities. In these interdisciplinary graduate level courses, students learn about the history of prizes and think about root cause problems. The best ideas they develop may become X-Prizes -- competitions that generally take between 3 and 8 years to win.
Among the X-Prizes currently underway or being planned include the Progressive Automotive X-Prize, a $10 million purse to be awarded in September 2010 to the teams that win a competition for clean, production-capable vehicles that exceed 100 MPG energy equivalent; a $10 million prize to sequence 100 human genomes in 10 days; a $10 million "African entrepreneurship" prize to the team whose graduates create the most new "beneficial jobs" over 5 years.

Next Jonathan Bays of McKinsey & Company, and author of the recent report "And the winner is... Capturing the Promise of Philanthropic Prizes" walked the audience through a history of prizes, such as the longitude prize, which awarded $2 million of today's dollars to the inventor who could develop a way of precisely determining a ship’s longitude (1714) and the French government’s food preservation prize that led to long-shelf life canned foods that awarded $44,000 of today's dollars. Prizes have historically been used to solve difficult and pressing problems. Today they are experiencing a resurgence ($250 million in prize capital for prizes of $100,000 or more has been raised since 2000) and offer many strengths. Prizes identify excellence by rewarding path-breaking innovators. They focus a community and public perception on a particular problem. Prizes help to mobilize new talent and pull unexpected people into developing solutions. Often the solvers of prize-backed challenges are the people whom one would least expect to be working in the field. Prizes educate competitors and build skills.  They bring additional capital to problems by mobilizing funds and give innovators access to facilities and resources.

Bays explained that there are different types of prizes such as participation prizes that bring people together to solve a problem; exemplar prizes like the Nobel or Man Booker prize, network prizes that stimulate the creation of communities and networks that outlast the prize; and exposition prizes like Ashoka Changemakers designed to focus on a specific need. In developing a prize, it is crucial to articulate the goals and objectives before jumping to designing the prize. After the aspirations are defined, then one can develop the prize strategy by identifying stakeholder needs and prize types. The prize elements and prize process -- the precise way in which the prize event will unfold -- can be developed. Equally important, he pointed out, is to spend time designing the post-prize process. That's when the impact of the prize is measured, reinforced and the legacy of the problem and the solutions generated by the prize will be rooted in the community. 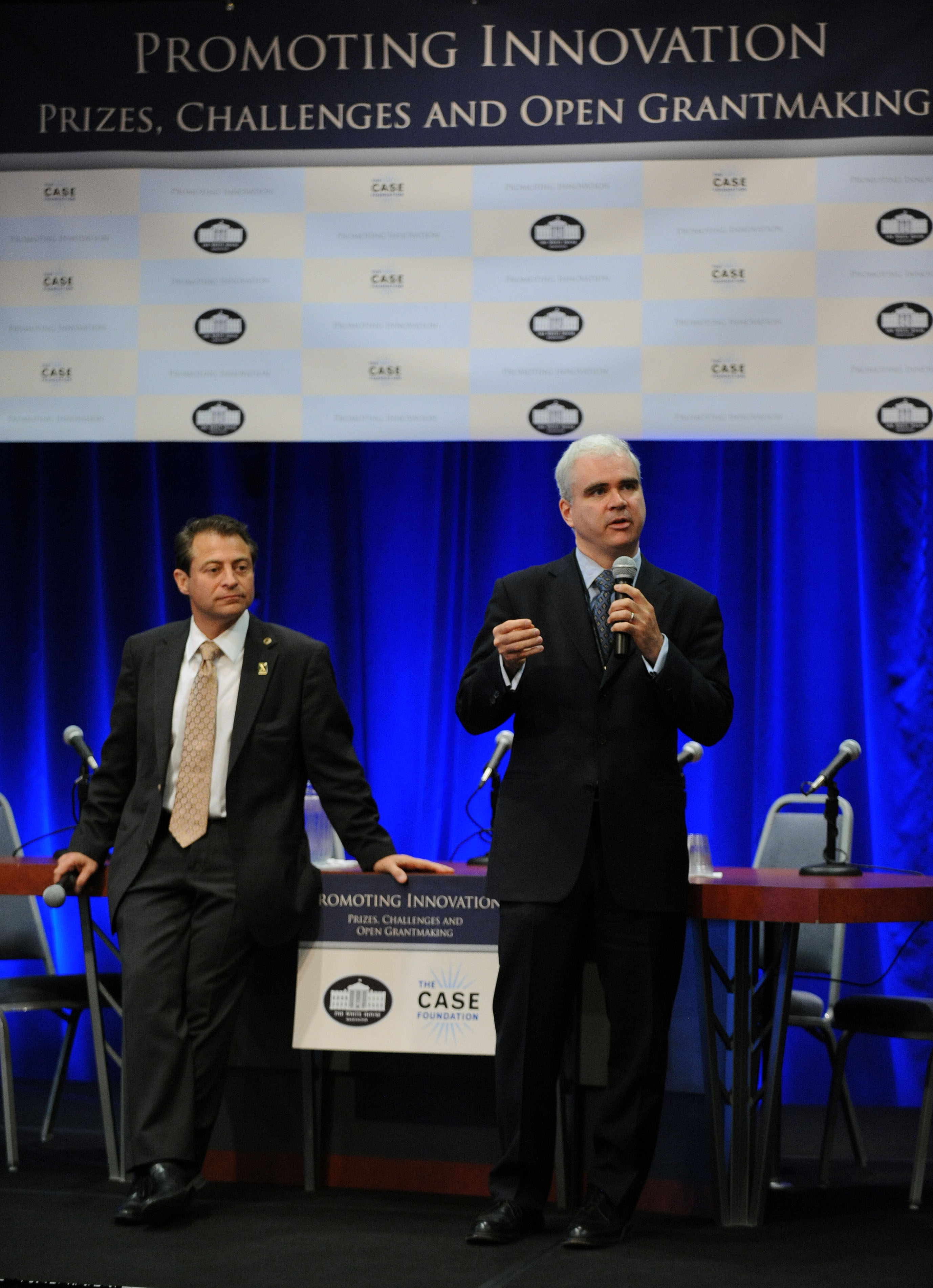 Peter Diamandis, CEO of the X-Prize Foundation, and Jonathan Bays of McKinsey & Company speak at the summit on Promoting Innovation: Prizes, Challenge and Open Grantmaking, April 30, 2010. (by Jocelyn Augustino)