"Because I Believe in You"

At the University of Michigan’s Spring Commencement, President Obama discussed the nature of politics in our democracy which he said has “never been for the thick-skinned or the faint-of-heart.” He talked about pundits and politicians who call each other all sorts of names and continue to debate about the role and size of government, but reminded the audience that “our experiment in democracy has worked better than any form of government on Earth.” 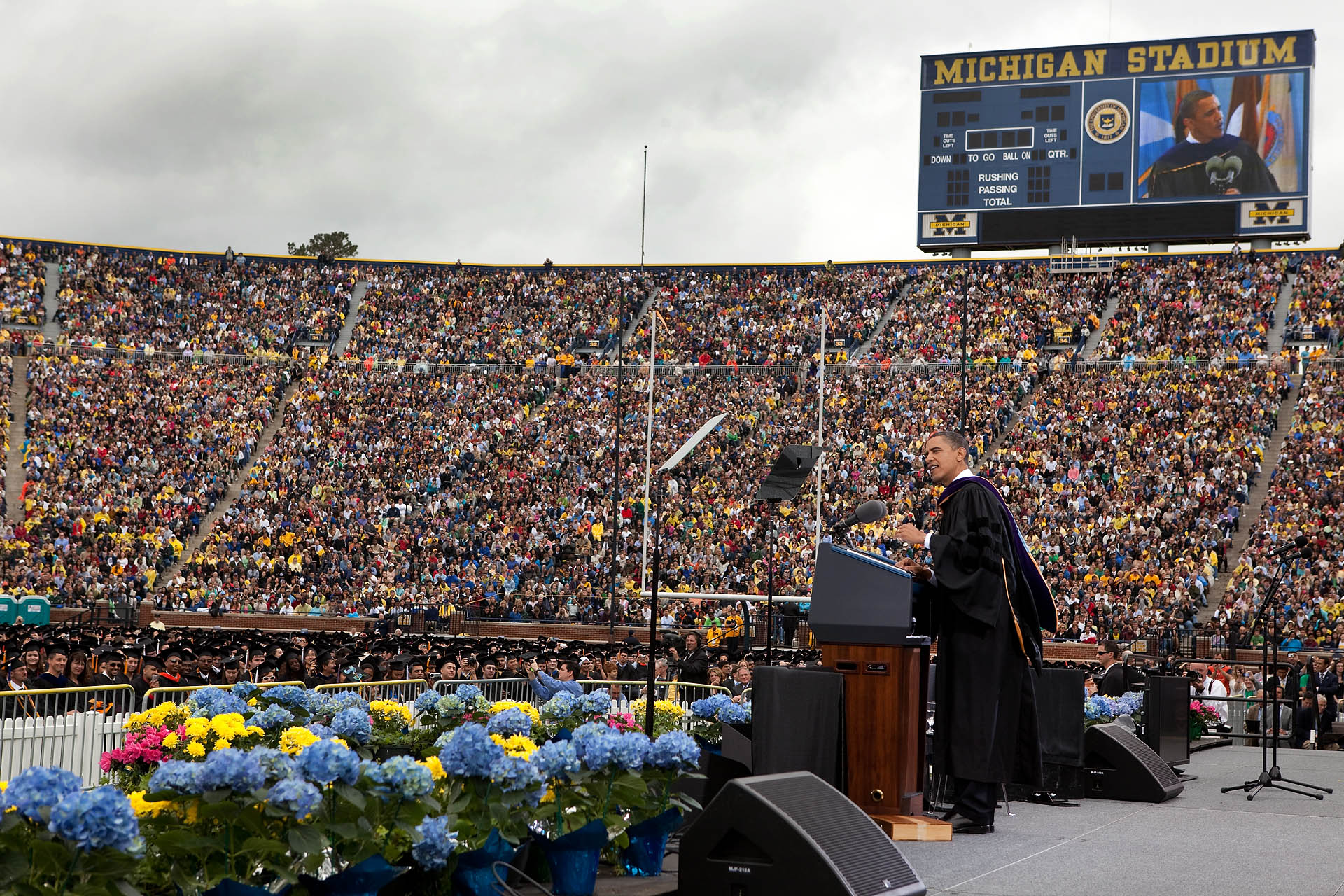 The President talked about the importance of healthy debate to maintain a basic level of civility, reminding the audience that “we can’t expect to solve our problems if all we do is tear each other down.” He explained that over-the-top rhetoric and vilification sends signals to the extreme sides that violence is a justifiable response.

You can disagree with a certain policy without demonizing the person who espouses it.  You can question somebody’s views and their judgment without questioning their motives or their patriotism. Throwing around phrases like “socialists” and “Soviet-style takeover” and “fascist” and “right-wing nut” that may grab headlines, but it also has the effect of comparing our government, our political opponents, to authoritarian, even murderous regimes.

Now, we’ve seen this kind of politics in the past.  It’s been practiced by both fringes of the ideological spectrum, by the left and the right, since our nation’s birth.  But it’s starting to creep into the center of our discourse.  And the problem with it is not the hurt feelings or the bruised egos of the public officials who are criticized.  Remember, they signed up for it.  Michelle always reminds me of that. The problem is that this kind of vilification and over-the-top rhetoric closes the door to the possibility of compromise.  It undermines democratic deliberation.  It prevents learning –- since, after all, why should we listen to a “fascist,” or a “socialist,” or a “right-wing nut,” or a left-wing nut”?

It makes it nearly impossible for people who have legitimate but bridgeable differences to sit down at the same table and hash things out.  It robs us of a rational and serious debate, the one we need to have about the very real and very big challenges facing this nation.  It coarsens our culture, and at its worst, it can send signals to the most extreme elements of our society that perhaps violence is a justifiable response.

The President encouraged the audience to actively seek information that challenges their beliefs in order to “begin to understand where the people who disagree with us are coming from.”

[I]f you’re somebody who only reads the editorial page of The New York Times, try glancing at the page of The Wall Street Journal once in a while.  If you’re a fan of Glenn Beck or Rush Limbaugh, try reading a few columns on the Huffington Post website.  It may make your blood boil; your mind may not be changed.  But the practice of listening to opposing views is essential for effective citizenship.  It is essential for our democracy.

He closed by saying that the nation's destiny has never been certain and reminded them of their "ability to shape that destiny."

That is what makes us Americans -– our ability at the end of the day to look past all of our differences and all of our disagreements and still forge a common future.  That task is now in your hands, as is the answer to the question posed at this university half a century ago about whether a free society can still compete.

If you are willing, as past generations were willing, to contribute part of your life to the life of this country, then I, like President Kennedy, believe we can.  Because I believe in you. 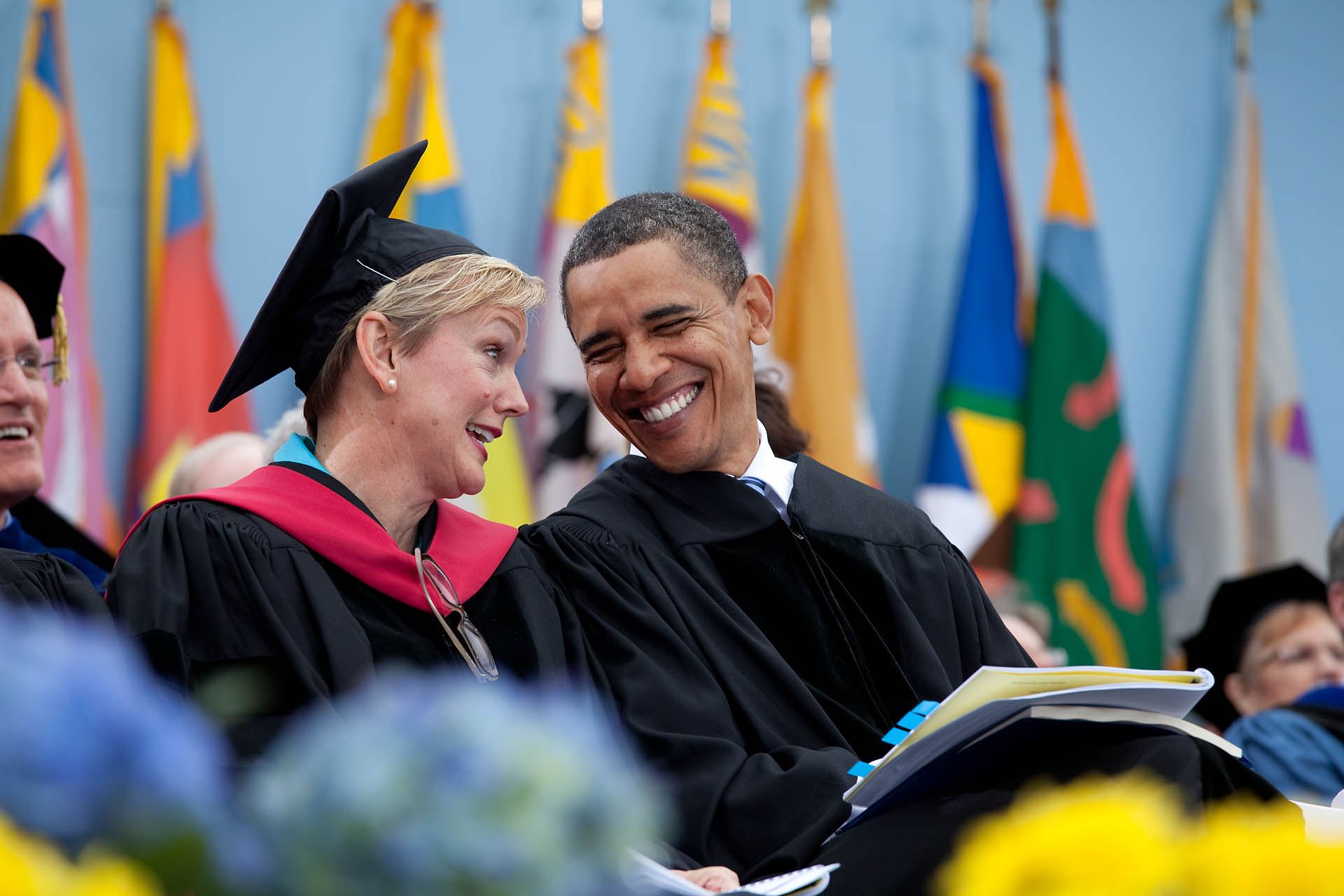