May 10, 2010 at 12:34 PM ET by Katelyn Sabochik
Twitter Facebook Email
Summary:
President Obama delivers the commencement address at Hampton University and reflects on the importance of education for personal growth and for our nation as a whole.
[[nid:11967]]

On Sunday, President Obama delivered the commencement address at Hampton University.  The President reflected on Hampton’s history and the importance of education to Hampton’s first students – escaped slaves – and this year’s graduating class:

[W]e meet here today, as graduating classes have met for generations, not far from where it all began, near that old oak tree off Emancipation Drive.  I know my University 101.  There, beneath its branches, by what was then a Union garrison, about 20 students gathered on September 17th, 1861.  Taught by a free citizen, in defiance of Virginia law, the students were escaped slaves from nearby plantations, who had fled to the fort seeking asylum.

And after the war’s end, a retired Union general sought to enshrine that legacy of learning.  So with a collection from church groups, Civil War veterans, and a choir that toured Europe, Hampton Normal and Agricultural Institute was founded here, by the Chesapeake –- a home by the sea.

Now, that story is no doubt familiar to many of you. But it’s worth reflecting on why it happened; why so many people went to such trouble to found Hampton and all our Historically Black Colleges and Universities.  The founders of these institutions knew, of course, that inequality would persist long into the future.  They were not naïve.  They recognized that barriers in our laws, and in our hearts, wouldn’t vanish overnight.

But they also recognized the larger truth; a distinctly American truth.  They recognized, Class of 2010, that the right education might allow those barriers to be overcome; might allow our God-given potential to be fulfilled.  They recognized, as Frederick Douglass once put it, that “education…means emancipation.”  They recognized that education is how America and its people might fulfill our promise.  That recognition, that truth – that an education can fortify us to rise above any barrier, to meet any test –is reflected, again and again, throughout our history. 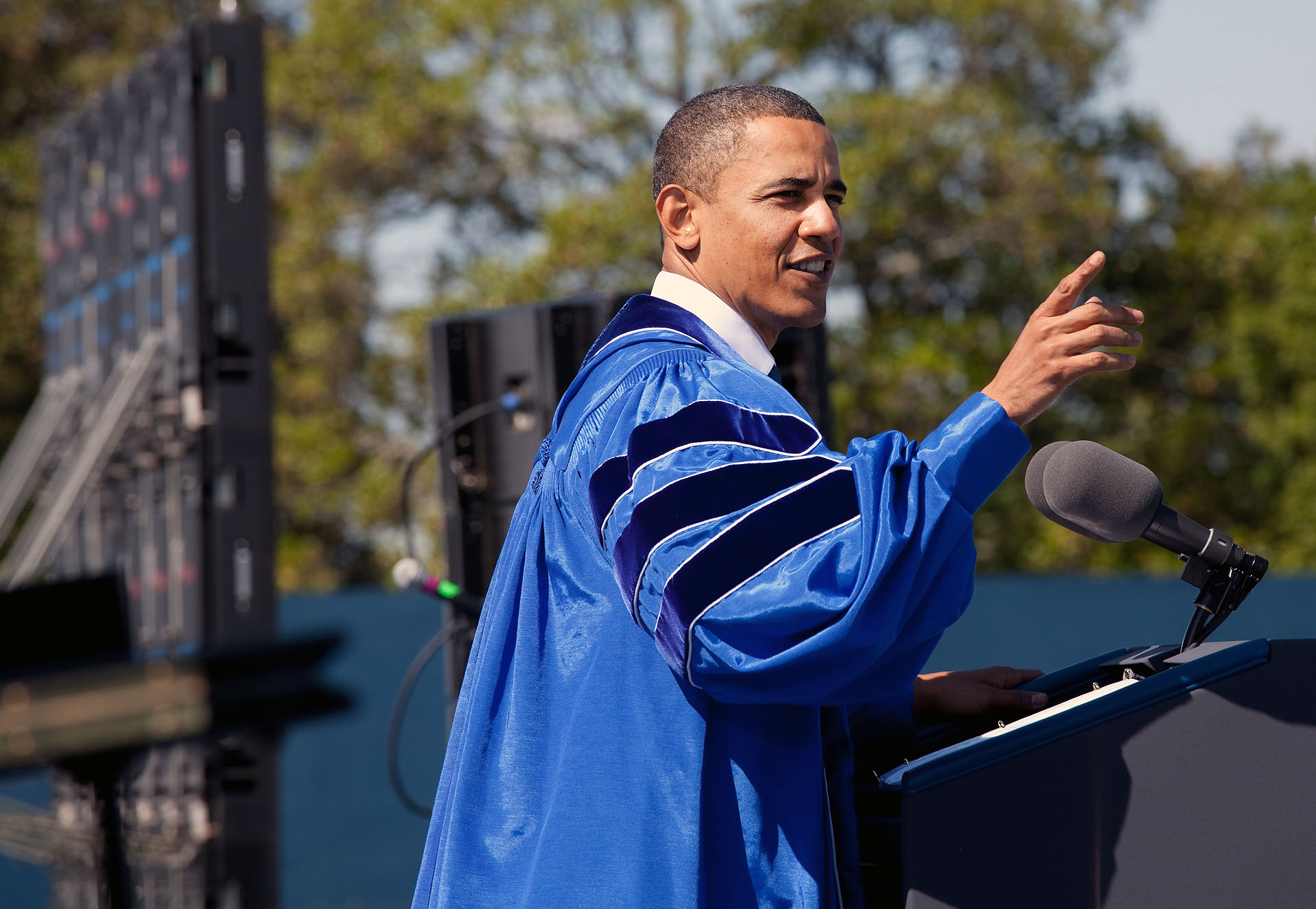 The President noted that “just as your education can fortify you, it can also fortify our nation, as a whole.”  In order to compete in the global economy, Americans must close the achievement gaps that leave many African American and Hispanic students and students in poorer communities behind.

What’s at stake is more than our ability to outcompete other nations.  It’s our ability to make democracy work in our own nation.  Now, years after he left office, decades after he penned the Declaration of Independence, Thomas Jefferson sat down, a few hours’ drive from here, in Monticello, and wrote a letter to a longtime legislator, urging him to do more on education.  And Jefferson gave one principal reason –- the one, perhaps, he found most compelling. “If a nation expects to be ignorant and free,” he wrote, “it expects what never was and never will be.”

What Jefferson recognized, like the rest of that gifted founding generation, was that in the long run, their improbable experiment –- called America –- wouldn’t work if its citizens were uninformed, if its citizens were apathetic, if its citizens checked out, and left democracy who those -- to those who didn’t have the best interests of all the people at heart.  It could only work if each of us stayed informed and engaged; if we held our government accountable; if we fulfilled the obligations of citizenship.

The President closed with a tribute to civil rights leader Dr. Dorothy Height who passed away recently at the age of 98.  Dr. Height was accepted to Barnard College in 1929, but when the school realized she was not white, they refused to allow her to attend.  Undeterred, Dr. Height took her acceptance letter from Barnard to New York University where she was accepted and pursued her education. 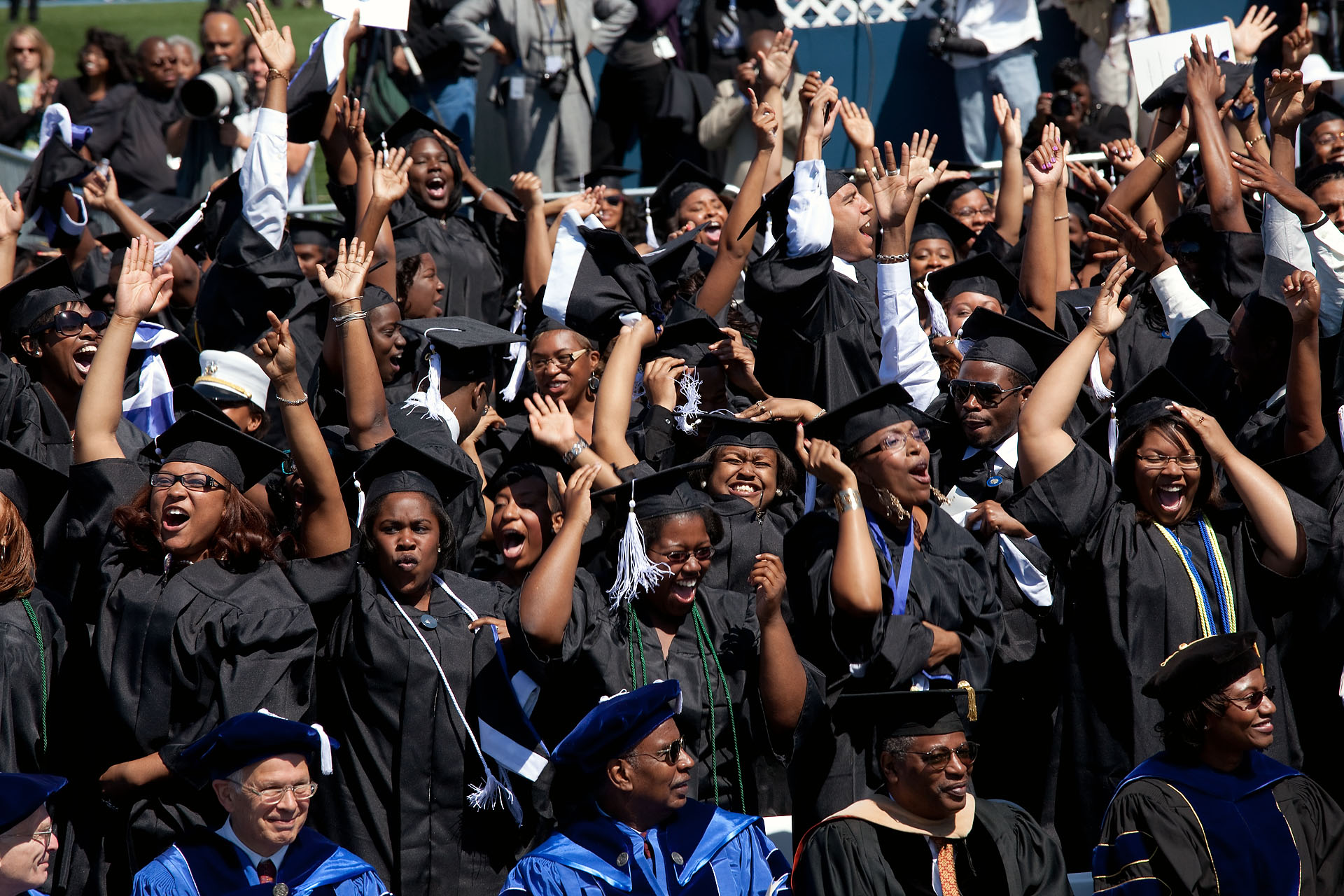 Students celebrate as President Barack Obama speaks at the commencement ceremony at Hampton University in Hampton, Virginia, May 9, 2010. May 9, 2010. (Official White House Photo by Pete Souza)