Nominating Kagan: "Her Passion for the Law is Anything But Academic"

May 10, 2010 at 12:12 PM ET by Jesse Lee
Twitter Facebook Email
Summary:
The President honors the career and values of Justice John Paul Stevens before announcing Solicitor General Elena Kagan as his nominee to fill his seat on the Supreme Court.
[[nid:11985]]

In noting that Solicitor General Elena Kagan would have legendary shoes to fill at the Supreme Court when confirmed, the President described the career of Justice John Paul Stevens:

For nearly 35 years, Justice Stevens has stood as an impartial guardian of the law, faithfully applying the core values of our founding to the cases and controversies of our time.

He has done so with restraint and respect for precedent -- understanding that a judge’s job is to interpret, not make law  -- but also with fidelity to the constitutional ideal of equal justice for all.  He’s brought to each case not just mastery of the letter of the law, but a keen understanding of its impact on people’s lives.

He followed by describing Kagan's career upholding many of the same values while blazing a path as one of the most respected legal minds in America:

Elena is widely regarded as one of the nation’s foremost legal minds.  She’s an acclaimed legal scholar with a rich understanding of constitutional law.  She is a former White House aide with a lifelong commitment to public service and a firm grasp of the nexus and boundaries between our three branches of government.  She is a trailblazing leader -- the first woman to serve as Dean of Harvard Law School -- and one of the most successful and beloved deans in its history.  And she is a superb Solicitor General, our nation’s chief lawyer representing the American people’s interests before the Supreme Court, the first woman in that position as well.  And she has won accolades from observers across the ideological spectrum for her well-reasoned arguments and commanding presence.

But Elena is respected and admired not just for her intellect and record of achievement, but also for her temperament -- her openness to a broad array of viewpoints; her habit, to borrow a phrase from Justice Stevens, “of understanding before disagreeing”; her fair-mindedness and skill as a consensus-builder.

These traits were particularly evident during her tenure as dean.  At a time when many believed that the Harvard faculty had gotten a little one-sided in its viewpoint, she sought to recruit prominent conservative scholars and spur a healthy debate on campus.  And she encouraged students from all backgrounds to respectfully exchange ideas and seek common ground -- because she believes, as I do, that exposure to a broad array of perspectives is the foundation not just for a sound legal education, but of a successful life in the law.

This appreciation for diverse views may also come in handy as a die-hard Mets fan serving alongside her new colleague-to-be, Yankees fan Justice Sotomayor, who I believe has ordered a pinstriped robe for the occasion.  (Laughter.)

But while Elena had a brilliant career in academia, her passion for the law is anything but academic.  She has often referred to Supreme Court Justice Thurgood Marshall, for whom she clerked, as her hero.  I understand that he reciprocated by calling her “Shorty.”  (Laughter.)  Nonetheless, she credits him with reminding her that, as she put it, “behind law there are stories -- stories of people’s lives as shaped by the law, stories of people’s lives as might be changed by the law…”

That understanding of law, not as an intellectual exercise or words on a page, but as it affects the lives of ordinary people, has animated every step of Elena’s career -- including her service as Solicitor General today.

During her time in this office, she’s repeatedly defended the rights of shareholders and ordinary citizens against unscrupulous corporations.  Last year, in the Citizens United case, she defended bipartisan campaign finance reform against special interests seeking to spend unlimited money to influence our elections.  Despite long odds of success, with most legal analysts believing the government was unlikely to prevail in this case, Elena still chose it as her very first case to argue before the Court. 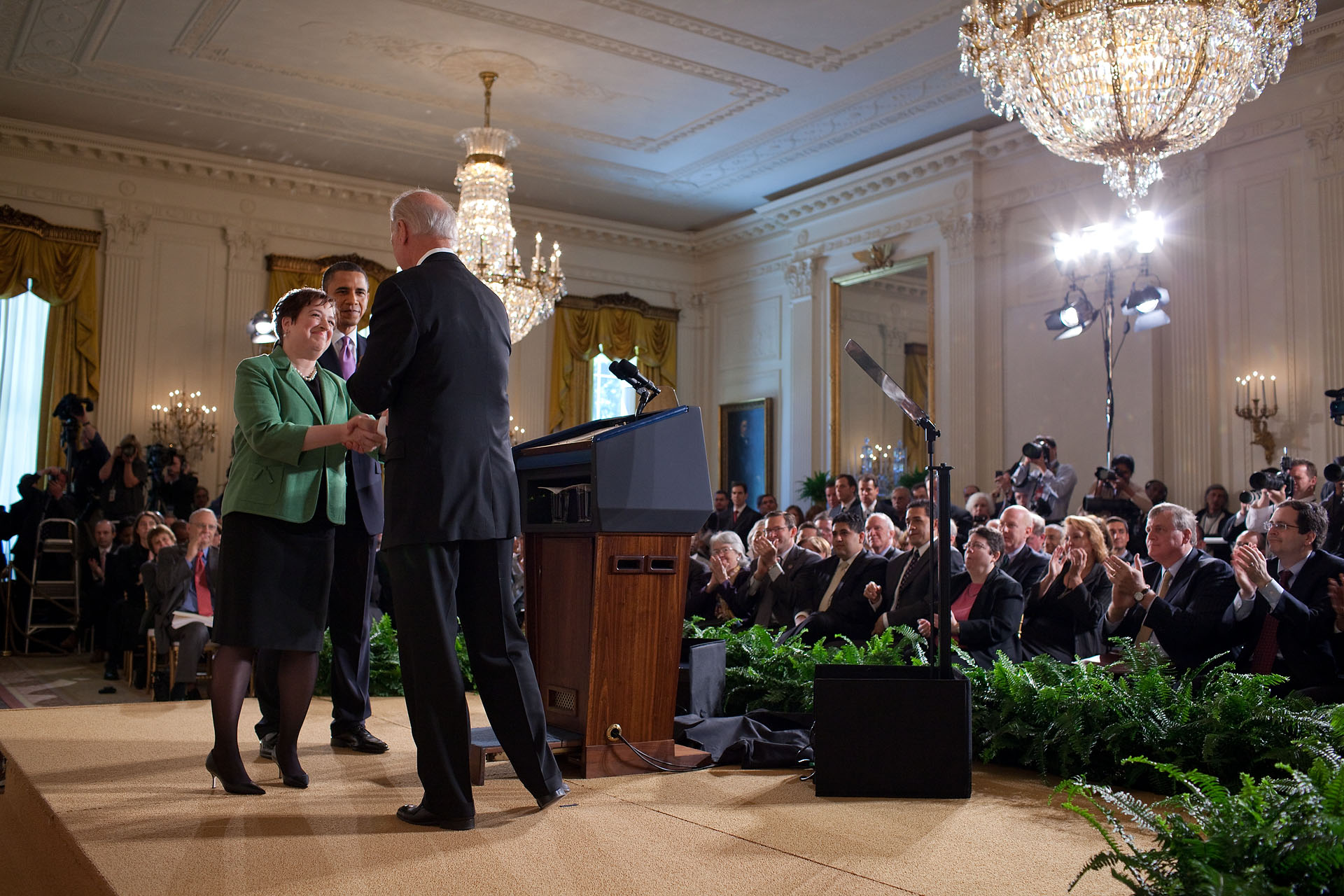 Solicitor General Elena Kagan, with President Barack Obama, shakes hands with Vice President Joe Biden as she is introduced as the President's nominee for Supreme Court Justice during an announcement in the East Room of the White House, May 17, 2010. (Official White House Photo by Pete Souza)

For her part, Kagan expressed a profound sense of patriotism in her experience as Solicitor General:

She spoke about "the joy of teaching" she felt at Harvard Law, and the experiences she has learned from throughout her career.  She closed on a personal note:

I'm thankful to my brothers and other family and friends for coming to Washington to be with me here today.  And much more, I am thankful for all of their support and loyalty and love, not just on this day but always.

If this day has just a touch of sadness in it for me, it is because my parents aren’t here to share it.  They were both, as the President said, the children of immigrants and the first in their families to go to college.  My father was the kind of lawyer who used his skills and training to represent everyday people and to improve a community.  My mother was a proud public schoolteacher, as are my two brothers -- the kind of teachers whom students remember for the rest of their lives.

My parents’ lives and their memory remind me every day of the impact public service can have, and I pray every day that I live up to the example they set.

Mr. President, I look forward to working with the Senate in the next stage of this process.  And I thank you again, Mr. President, for this honor of a lifetime.  Thank you so much.  (Applause.)