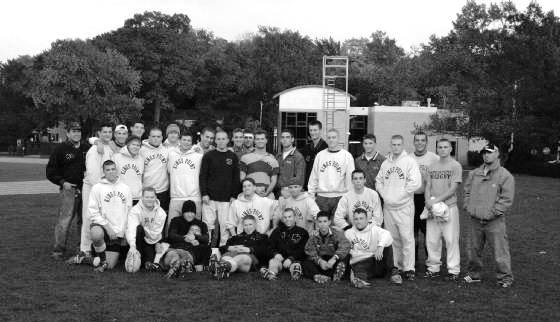 In 2008, when Darin Rupinski graduated from the US Merchant Marine Academy in Kings Point, NY, he did not envision a career aboard deepwater oil rigs. But, fortunately for his crewmates aboard the ill-fated Deepwater Horizon, that's where he landed.

Because on April 20, when an explosion rocked the Transocean Ltd. oil rig, instead of fleeing for his own safety, Darin put his Kings Point training and leadership into action and helped facilitate the orderly evacuation of the Horizon.

"I ran up to the bridge and grabbed some radios, a flashlight, a bullhorn and ran back down toward the lifeboat deck," Darin recounted to Newsday's Bill Bleyer. "I used the bullhorn to get people into the boats and calmed down."

Amid the yelling and screaming, Darin worked with his supervisor to restore order from the chaos that spread among the crew after the explosion.

Eventually, they filled the supervisor's lifeboat and lowered it into the Gulf. 10 minutes later, the lifeboat Darin commanded was filled and motoring toward a supply ship nearby, but safely removed from the inferno.

Looking back on the oil rig, Darin says he saw, "basically, a huge torch in the middle of the Gulf of Mexico."

I can't express how proud I am of Darin's exceptional demonstration of courage and leadership.

But, while the Merchant Marine Academy is also understandably proud of Darin's actions, they see his behavior--though exemplary--as par for the course. As Capt. Timothy Tisch, one of Darin's safety course professors observed:

"He did what he was supposed to do. What we teach them in their Safety of Life at Sea course is how to be in charge of the crew during shipboard emergencies and specifically abandoning ship: mustering the crew, being a leader and keeping everybody calm and focused, and getting away from the ship."

Darin himself downplayed his bravery. "We did lifeboat drills every weekend," he explains. "I'd been taught what to do, and I did it."

I understand where Capt. Tisch and Darin are coming from, but I'll bet none of the 100+ crewmembers aboard the lifeboats Darin helped load and remove to safety are taking his actions for granted.

Where I come from, there's no way around it: Darin Rupinski is a hero.