As a former middle school science teacher, I know teachers and students rarely have an opportunity to interact with the scientific community on common ground.  Yes, there are great professional development opportunities for teachers at research facilities and college tours for students, but seldom do we put all three groups in the same room and offer an opportunity for conversation.  This was the impetus for our National Lab Day event Dinner with a Scientist, an event where we invite local scientists to talk about their work and share activities in a format that is part career day, part prom, and part speed dating. 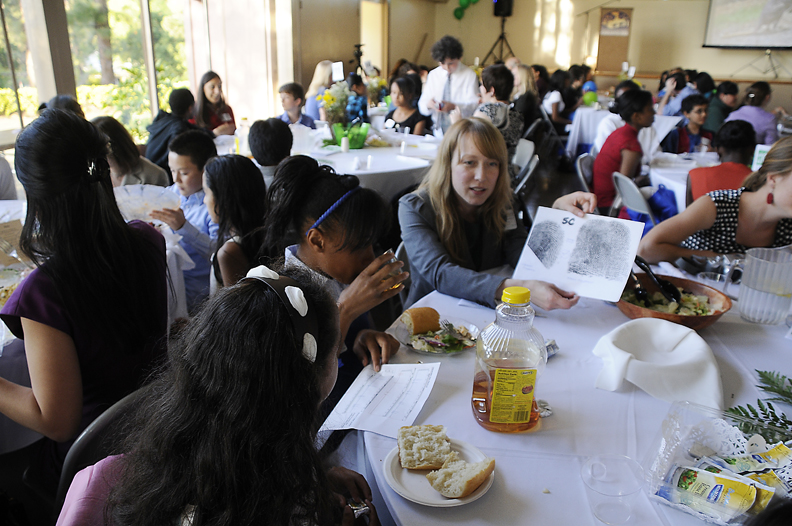 On May 5th, 250 Oakland secondary students, teachers, and scientists gathered at the Oakland Zoo to see the animals up close and talk about science in a semiformal setting.

Twenty-five scientists attended including researchers from UC Berkeley who shared about particle astrophysics, engineers from Lawrence Berkeley National Lab who discussed materials in computer chips, and chemists from Chevron who talked about the environment.  Every thirty minutes, scientists would change tables and meet a different group of teachers and students.

The global importance of science was also highlighted by Oakland Zoo’s Amy Gotliffe who shared about her work as a conservationist and how important it is to change the habits and mindsets of people in the United States and Africa.

Amy Gotliffe, Conservation Manager for the Oakland Zoo, holds up a walrus tusk to talk about the importance of conservation to students from Montera Middle School and United for Success Academy. May 12, 2010. (by Oakland Unified School District)

Abbey Barnard a teacher from United for Success Academy, brought three eight graders who were really interested in science.  Among them was a student that recently immigrated to the United States.  He was excited learn about conservation around the world and also commented on the fact that eating with silverware was a cross-cultural experience!

Dinner with a Scientist is a unique opportunity for teachers to link their students with working scientists.  Discussions ranged from the daily work of scientists to life in college to early childhood experiences, and teachers who influenced their careers.  No topic was off limits or too rigorous.  The eighth graders discussed multiverses with a physicist from the Space Science Laboratory with ease!

This event was so successful that we’ll host a second Dinner with a Scientist event on June 2nd for upper elementary students and teachers.  For more details, checkout the Science in Oakland website.

Whether you’re a teacher or a scientist, getting involved with National Lab Day is easy.   To learn more about how to get involved check out these videos on the National Science Foundation website or visit NationalLabDay.org.