This morning, President Obama honored the 2010 National Association of Police Organizations (NAPO) TOP COPS award winners at a ceremony in the Rose Garden.  The President was joined by Attorney General Eric Holder and President of NAPO Tom Nee.

The President commended the TOP COPS as “men and women who stand as shining examples of the bravery, persistence and good judgment that so many members of out law enforcement community display each and every day.” He congratulated them for their extraordinary service in the face of great challenges:

I think it’s fair to say that the folks behind me never imagined they would be here today.  If you asked them, these officers would say they were just professionals doing their jobs as best they could.  And they’ll tell you that there are thousands of law enforcement officers in every corner of this nation who are just as brave, just as dedicated and just as capable as they are -– and who would do the same thing if given the opportunity.

And that’s all true.  But that’s exactly what makes these officers  –- and all of our men and women in uniform -– real heroes.  It’s the ability to put on a badge and go to work knowing that danger could be waiting right around the corner.  It’s the understanding that the next call could be the one that changes everything.  And it’s the knowledge that, at any moment, they could be called upon to stop a robbery, to participate in a high-speed chase, or to save a life. 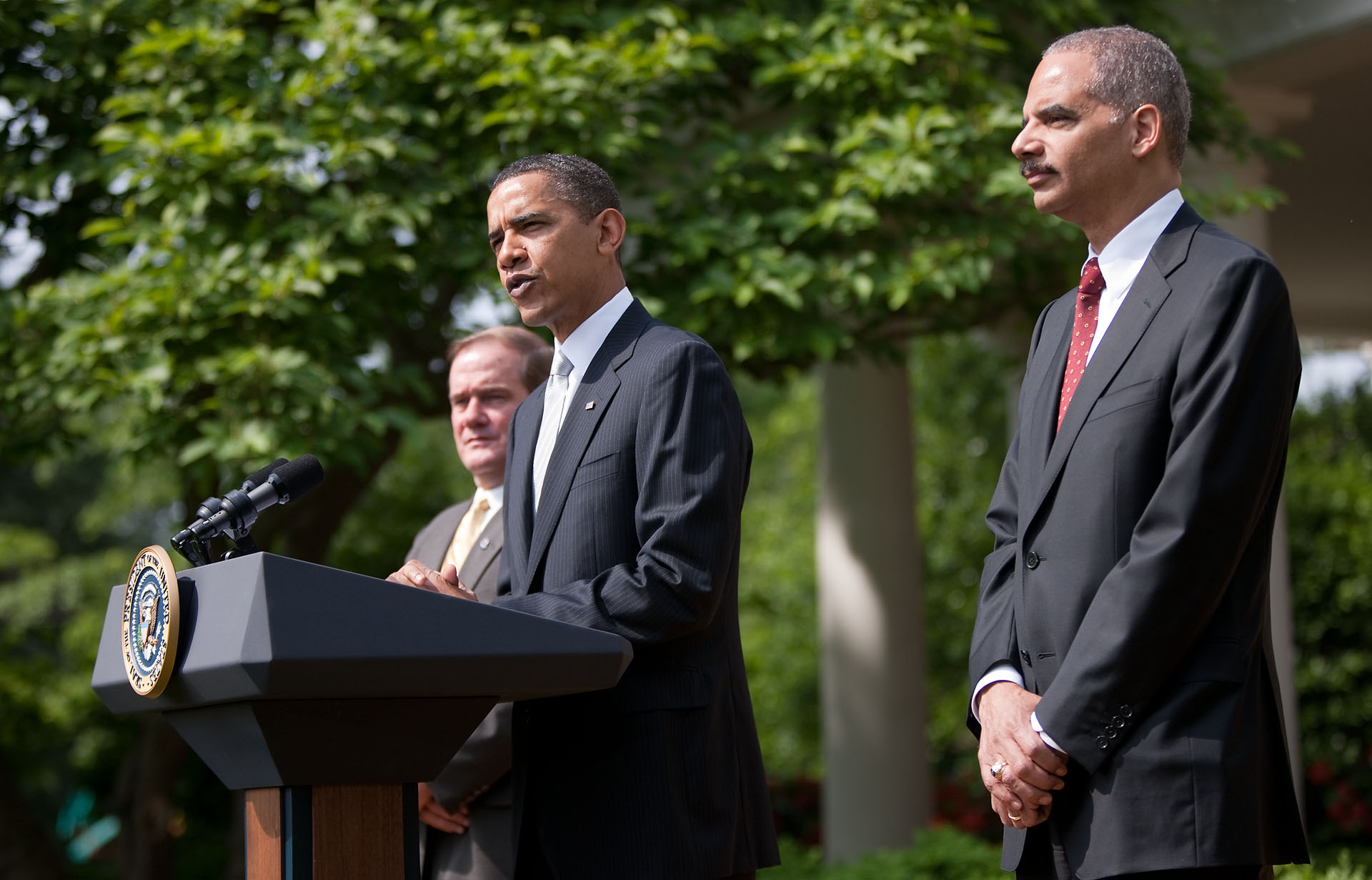 The President recognized that honoring TOP COPS means more than simply thanking them but also supporting the entire law enforcement community, “because we’ve seen the results of that work.” He talked about ways the Administration is working to give state and local law enforcement the resources they need, including $3.5 billion from the Recovery Act and $1 billion for the COPS program alone.

[W]e are incredibly proud of the courage that all of you have shown in the conditions that we can only imagine.  It’s a distinction that none of you asked for, but all of you accepted.  And I promise that we will stand by you, and everyone who wears the badge, as you continue to keep us safe. 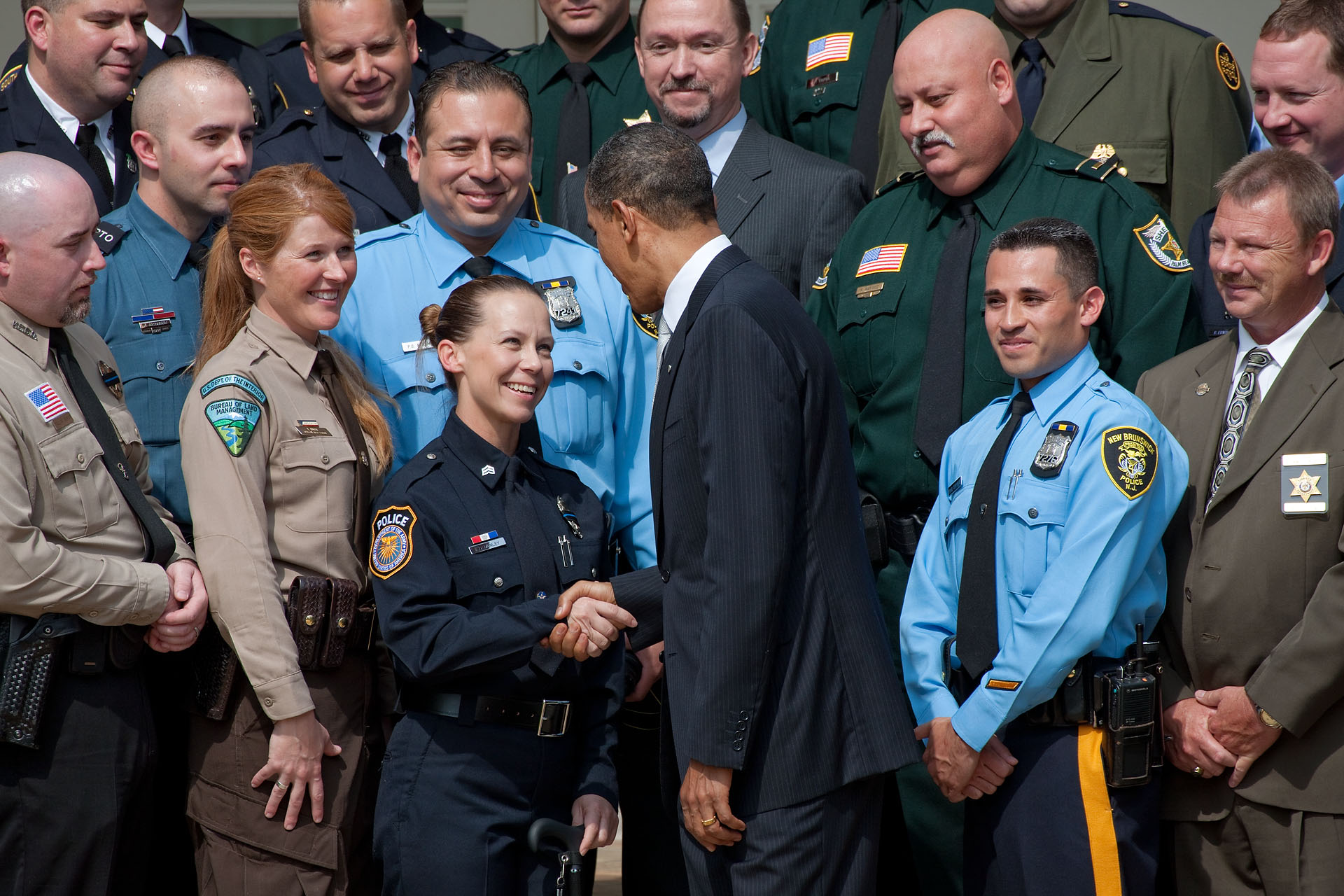 Read more about the extraordinary actions taken by these individuals:

Case: Officer Jacobsen responded to a home burglary-in-progress call and found two suspects inside. As Jacobsen grabbed one, the burglar spun around, revealing a pistol. Jacobsen fired his own weapon, striking the suspect. Outside, Jacobsen saw the other suspect, tasered him, took him down and cuffed him.

Case: A woman’s former boyfriend kidnapped her and held her at knifepoint. The deputies surrounded the car at a freeway entrance ramp. As the kidnapper began to press the knife into the victim’s throat, the three deputies fired into the car. Deputy Wolf then jumped into the vehicle and pulled the victim to safety.

Case: A disturbed employee hijacked a school bus, taking another driver hostage. Officer Koster responded and pursued the bus. The suspect continued, crashing the bus into several police cars. Koster was able to leap to the front of the bus, stop the suspect with three shots and free the hostage. Three months earlier, Koster had donated 60% of his liver to his neighbor, saving her life.

Case: Chief Deputy Edwards initiated a homicide investigation following the beating death of a two year old.  He discovered the child’s parents had adopted seven children who were living in deplorable, cage-like conditions, with evidence of torture and abuse. Edwards took a personal interest in the case, reaching out to the U.S. Marshals Service to catch the fugitive parents. He also worked closely with Social Services to make sure all the children were placed in safe homes. He and his wife eventually adopted one of the children themselves and made the boy a part of their own family.

Case: A woman was shot down in a hospital parking lot. The couple who tried to help her were also shot. When the officers arrived, they engaged the shooter but he was too far away to take down quickly. As darkness fell, the shooter fled. For the next six hours the manhunt continued. When finally cornered, the sniper pulled a knife and started toward the officers, at which point they were forced to fire, bringing him down.

Case: Bank robbers, fleeing in a van, were shooting at the officers in pursuit. At a dead end street, an intense firefight began. The officers managed to bring down all four robbers, and retrieved the crooks’ guns as well as the loot from the robbery.

Case: Detectives Curran and Falkowski were assigned to arrest career criminal James Tyson. Tyson resisted arrest so violently that even after Det. Falkowski tasered him, he managed to pull his pistol and shoot the detective at point blank range. Before Det. Curran could take cover, he too was shot. Yet despite their wounds both cops engaged Tyson in a firefight until their bullets took Tyson down.

Case: An arsonist set a fire at a group home for mentally handicapped adults. Officer Hipple was first on the scene, before any firefighters were able to arrive.  He battled smoke, flames and intense heat, trying to get the women to safety. By the time firefighters arrived, Hipple and the three women were unconscious and had to be pulled from the building. Hipple had refused to leave them, even though he could have saved himself. All three were all treated for severe burns but, thanks to Officer Hipple, two of the three survived.

Case: Trooper Johnson was on routine patrol when he happened upon the crash and saw the overturned vehicle on fire. Johnson crawled in through the passenger window. The interior was completely filled with smoke and flames. Johnson found the little girl wedged under the front dash and pulled her to safety just seconds before the entire car was engulfed in fire. That day, February 6, 2009, turned out to be the child’s third birthday.

Case: Maj. Nidal Hasan entered the U.S. Army’s Readiness Center at Fort Hood and proceeded to shoot down his fellow soldiers. Sgts. Munley and Todd responded and engaged Hasan in a firefight.  Munley took three bullets in her efforts to end the rampage, but she and Todd were able to put a stop to the assault.