This afternoon, President Obama welcomed UConn’s Women’s Basketball Team into the White House and congratulated the Huskies on their second straight NCAA championship as well as their second straight undefeated season. Also in the room were Senators Chris Dodd and Joe Lieberman, and Congressmen John Larson and Joe Courtney, all of who are UConn fans.

Pointing out that the women’s basketball team hadn’t lost a game since he was elected into office, President Obama reflected back to last year when the team visited the White House and they played a quick game of "PIG" on the White House court: “I’m not going to say who won...”  He commended the team on their outstanding achievements, including seven NCAA titles, six regular undefeated seasons, and four undefeated championship seasons.

[L]ast year, Coach Auriemma promised you guys would go 40-0 this year.  It’s not your fault that he can't do math very well -- there were only 39 games.  So, Coach, you can't win 40 if there are only 39 games. But 39-0 is pretty good.  These women beat their own NCAA record to become the first women’s basketball team in history to win 78 games in a row over the past two years -- which is just a staggering achievement.

And I was telling them Michelle and I work out in the morning -- we've got a little gym here in the White House.  And we’d just watch Sports Center.  I know you’ll be surprised that we don't watch the news shows.  But this is really true.  During the entire season, I just kept on repeating, and I truly believed this was the best team in all of sports, any sport, any gender, by far.  And that's just something that made us all very proud.

The President also noted that Coach Auriemma’s teams have a 100 percent graduation rate, commending them for working as hard in the classroom as they do in their games. He praised them for setting excellent examples on and off the court, recognizing their service work in elementary schools and with cancer patients.

Whether it’s winning a national championship, balancing practice with schoolwork, or serving others, these young women made it all look easy, despite the fact that we all know they put in enormous amounts of work.  It’s that perseverance and dedication and that will to succeed that makes them so special.

And that’s why every single one of these young women sets a terrific example for girls and women today -- as athletes, as scholars and as leaders.  And I think, Coach, you have just been an extraordinary leader, and I think all of us are extremely proud of the example that you’ve set. 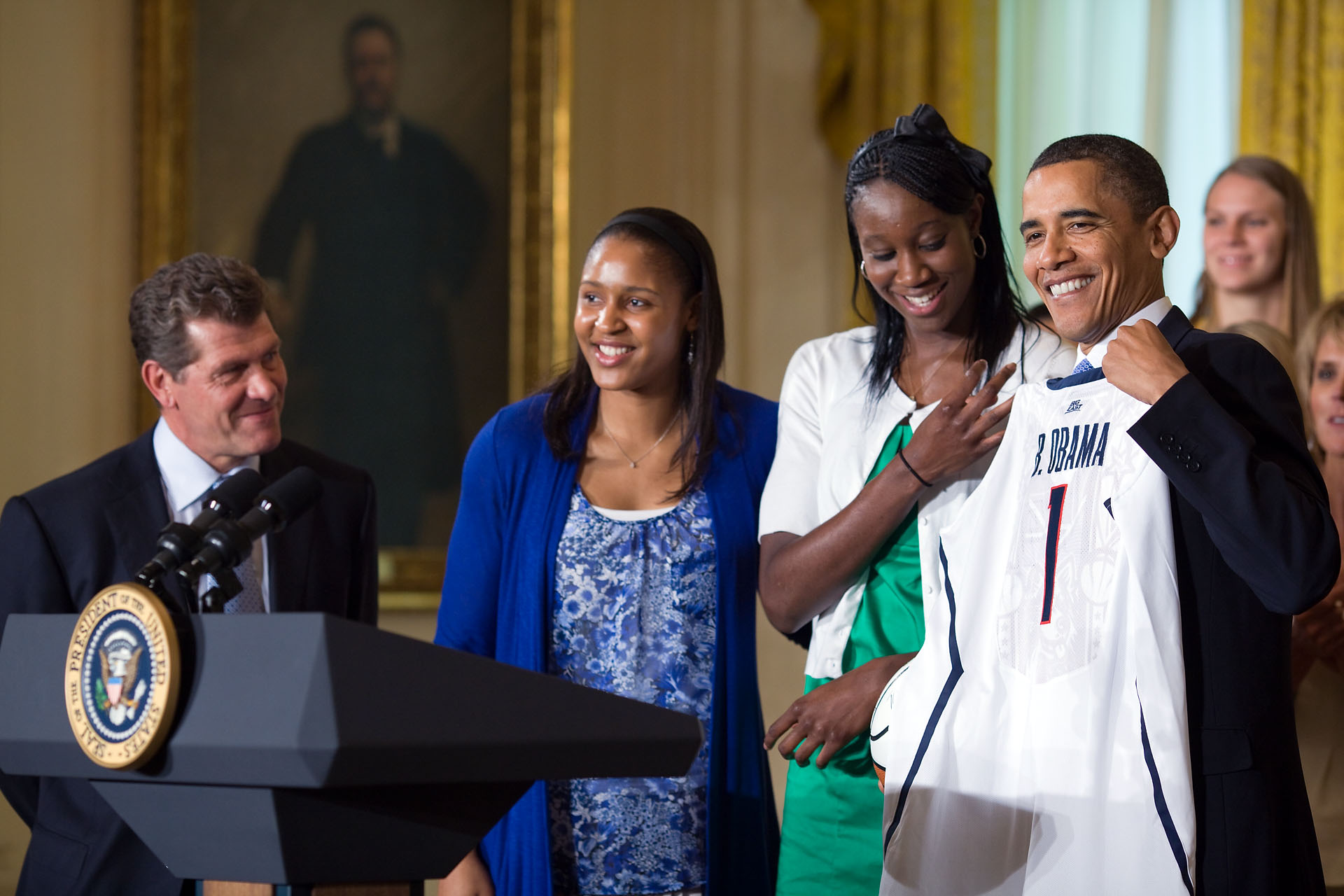 President Barack Obama is presented with a team jersey by Tina Charles, center, and Maya Moore, center- left, during a ceremony where he honored the 2010 NCAA champion University of Connecticut women's basketball team in the East Room of the White House. At left is head coach Geno Auriemma. May 17, 2010. (Official White House Photo by Pete Souza)