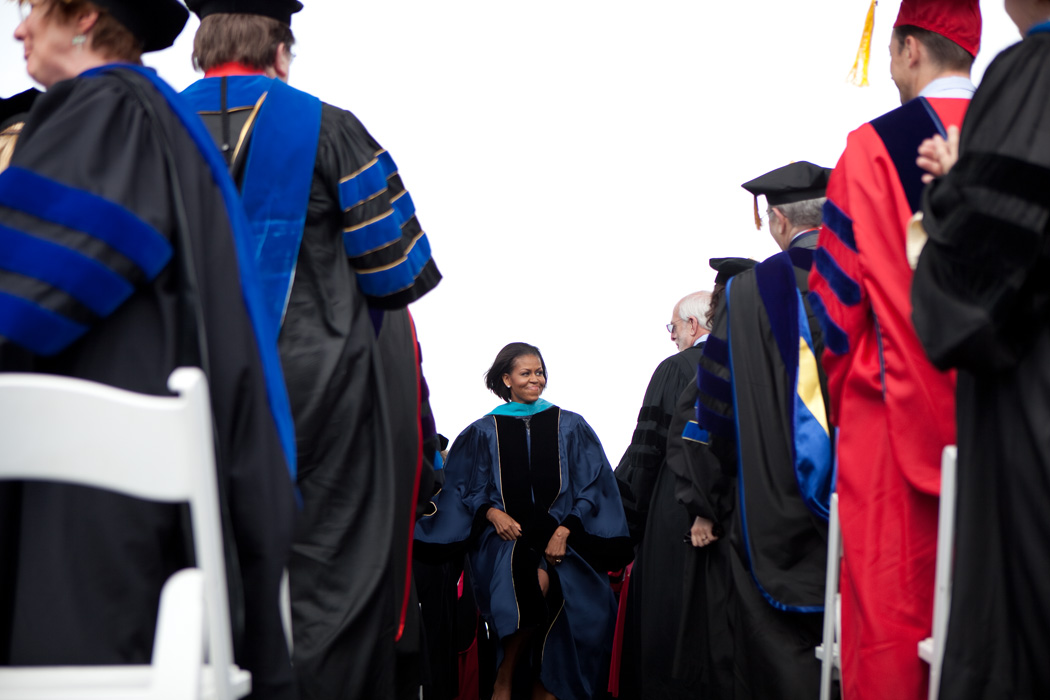 In the fall, the First Lady issued a challenge to George Washington University students, faculty, staff and trustees to perform 100,000 hours of community service, promising she’d speak at their graduation if they rose to it. They did and, as a woman of her word, Mrs. Obama delivered the commencement address to the Class of 2010 on the National Mall in Washington, D.C.

From digging neighbors out after “Snowmageddon” to restoring a local high school to running a clinic for those in need of medical aid to a host of global service projects – Mrs. Obama was impressed by what the George Washington University community did, but more, so how they did it. She asked that the graduates take on one more challenge:

So today, graduates, I have one more request to make of you, one more challenge, and that is: Keep going. Keep giving. Keep engaging.

I’m asking you to take what you’ve learned here and embrace the full responsibilities that a degree from an institution like GW gives you. I’m asking your generation to be America’s face to the world. It will make the world safer, it will make America stronger, and it will make you more competitive. 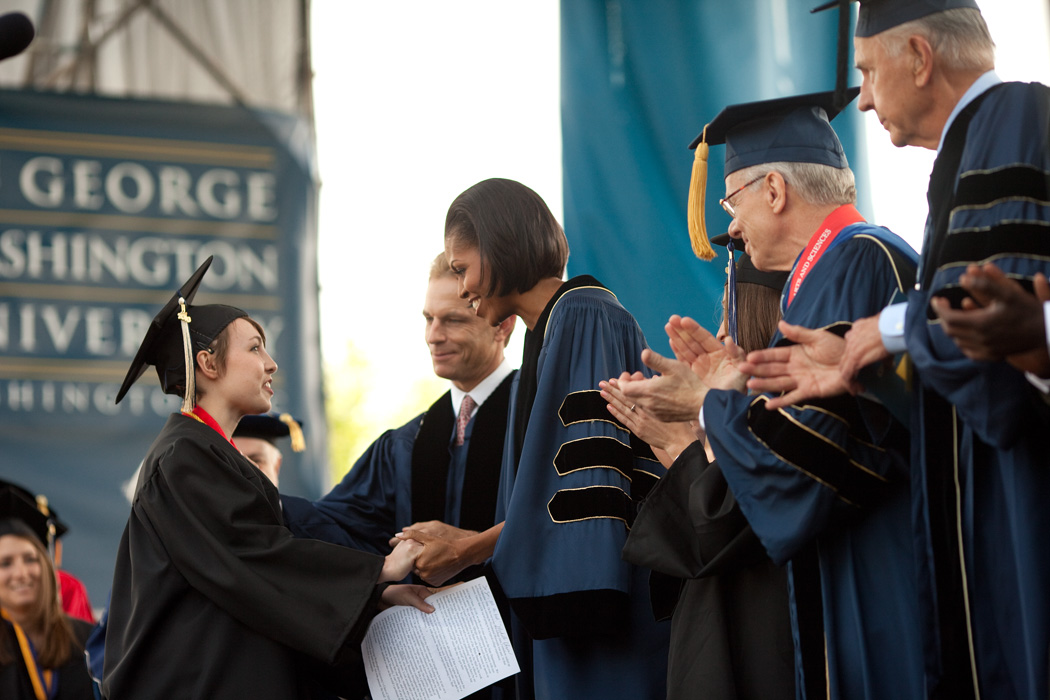 The First Lady continued, encouraging global engagement through the story of a young woman that she met during her visit to Mexico last month who traveled to Vietnam to volunteer with children on a whim:

She described her days there as very “unfair” and “difficult.” She said there were days there “that [made] us feel meaningless.” But she also said there were days “…where I felt I could change the world.” And that trip made her realize she wanted to be a doctor. And when she returned to Mexico, she enrolled in medical school. But her journey led her to an important pivot point in her life. She said, and these are her words, “I realized that this is my country. This is where I belong and this is my culture, where I need to help.”

You see, that young woman, she went halfway around the world before she found her way home. And I suspect that something has -- like that has happened to many of you.

And through Davina Durgana's story, a young woman graduating that day, whose simple mission trip to El Salvador inspired her to take up the cause of human trafficking when she came back:

She found an internship that allowed her to work on an anti-human trafficking campaign, and she’s going to pursue graduate studies in human rights next year at the Sorbonne.

And by the way, Davina, she also serves as a Big Sister to a young girl in Anacostia; she volunteers with wounded warriors at Walter Reed; she helped run a Girl Scouts troop where she encouraged underprivileged girls to get involved; she volunteers as an EMT at the busiest fire department in the D.C. area, and convinced other classmates to join her –- and, somehow, she found time to graduate!

In closing, The First Lady touched on the historical significance of the commencement location as a landmark of change in this country:

In the end, the simple act of opening your mind and engaging abroad –- whether it’s in the heart of campus or in the most remote villages -– can change your definition of what’s possible.

Decade after decade, young Americans who loved their country; and loved its ideals; who knew that it stood for something larger in the world; came here to this spot to wade into the rushing currents of history because they believed that they could change its course.

And on a cold January morning last year, many of you came here to wade in yourselves. It was the day my husband took the oath of office as President of the United States. And that day, he pledged to seek a new era of American engagement, and he asked each of us to embrace anew our duties to ourselves, our nation, and the world.

And from what I’ve seen from your class, I have no doubt that you will. Look, we believe in you so deeply. So, your new challenge begins now –- and it’s one that doesn’t end after 100,000 hours. 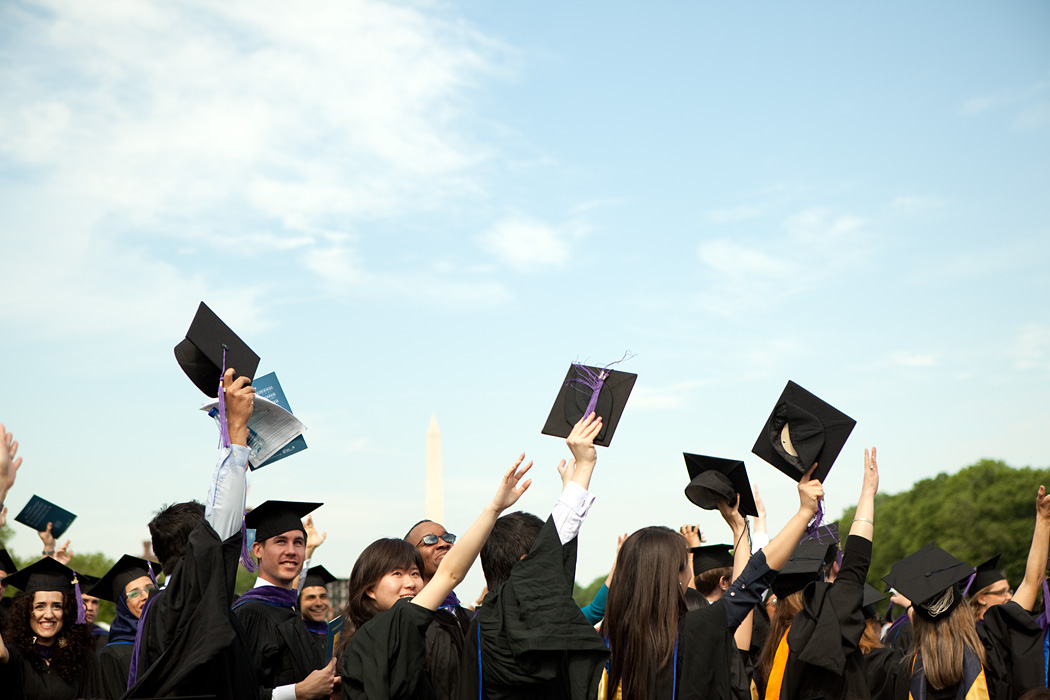 Students from George Washington University celebrate during their commencement ceremony on the National Mall in Washington, D.C., May 16, 2010. (Official White House Photo by Samantha Appleton)

Sadly, as hopeful a day as it was for the thousands of George Washington students, the commencement began with a moment of silence for student Taylor Hubbard who died tragically the day before.  Read George Washington University President Steven Knapp's statement at the University website.