May 21, 2010 at 5:42 PM ET by Secretary Donovan
Twitter Facebook Email
Summary:
Secretary for Housing and Urban Development Shaun Donovan discusses a visit to Atlanta where local planners are linking neighborhoods together through the Atlanta BeltLine -- a project that will not only connect the City of Atlanta with its surrounding communities, but will create new economic development and jobs.

All across this country, I am continually impressed by the ways cities are working to build their own more livable, environmentally sustainable communities. Last week, I traveled to Colorado where the City of Denver has started building more than 100 miles of new light rail, commuter rail, and bus rapid transit lanes that will link the 32 communities surrounding the city. In February, I witnessed how Portland, Oregon is working to build a 467-mile long passenger rail line that will connect the city with Eugene, Seattle, and Vancouver, Canada.

In January, President Obama told America’s Mayors that “We need strategies that encourage smart development linked to quality public transportation, that bring our communities together.” Today, I had the opportunity to witness first-hand how local planners in Atlanta are doing just that by linking neighborhoods together. Through the Atlanta BeltLine project, the city will combine green space, trails, transit, and new development along 22 miles of historic rail segments that surround the urban core.

Over the past 20 years, metro Atlanta’s growth has occurred in widespread and disconnected pockets of development, which strained the region’s quality of life and economic growth. This has resulted in long commutes, poor air quality, auto dependency, and limited public space for residents and businesses throughout the region. The BeltLine will change this pattern of regional sprawl in the coming decades and lead to a vibrant and livable Atlanta with an enhanced quality of life. This is just the type of redevelopment our Sustainable Communities Initiative will foster across the country.

The Transit, Trails, and Transportation portion of this project will add a network of light rail transit that will connect with the existing transit system and the new, proposed Peachtree Streetcar. The multi-use trails will follow the 22-mile transit loop, and 11 miles of additional trails will extend into the surrounding neighborhoods to increase access to the BeltLine. This project will also include Atlanta’s largest investment ever in affordable workforce housing which will generate an estimated 5,600 affordable units over the course of the project.

Over the next 25 years, the BeltLine will not only connect the City of Atlanta with its surrounding communities, but will create more than $20 billion of new economic development and approximately 30,000 new full-time jobs, and 48,000 year-long construction jobs.

While in Atlanta, I also joined Congressman Hank Johnson and Atlanta Mayor Kasim Reed for a tour of the Pittsburgh Neighborhood, which has been severely impacted by foreclosures and blight. In recent years, it has had the highest foreclosure rate in the region and has been victimized by rampant mortgage fraud while suffering from high levels of vacancy and property abandonment. Many homes in the neighborhood stand vacant and boarded up. With $1.25 million in HUD’s Neighborhood Stabilization Program (NSP) funds, $3 million in loans from the Casey Foundation, and $145,000 in grants from Living Cities and JPMorgan Chase, the Pittsburgh Neighborhood will soon find relief and start to grow again.

While in Atlanta, I also addressed the 18th Congress for the New Urbanism (CNU) about the Obama Administration’s Sustainable Communities Partnership and the work HUD’s Office of Sustainable Housing and Communities is doing to make communities healthier and more economically competitive. As I told the CNU, it is my hope that through this initiative we will be able to encourage the kind of smart growth Atlanta that is experiencing through the BeltLine project, in neighborhoods and communities across the country. 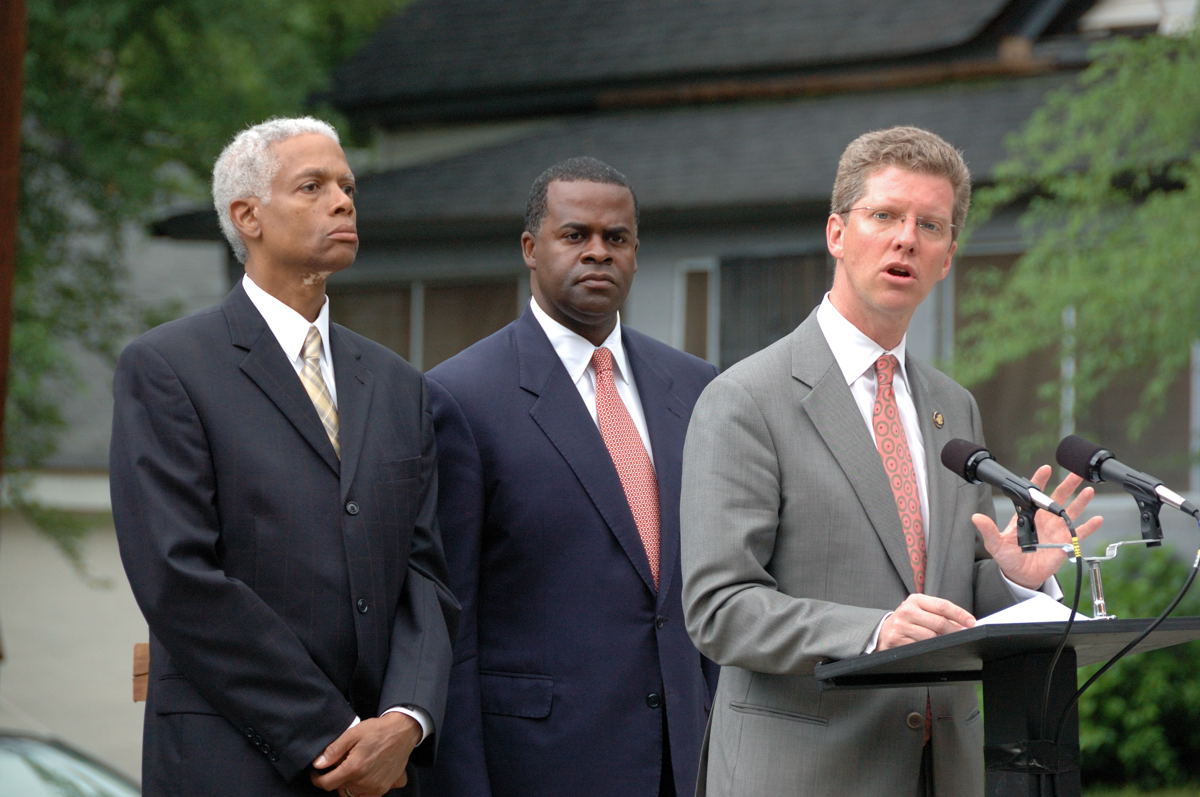 Secretary for Housing and Urban Development Shaun Donovan delivers remarks in Atlanta, joined by Congressman Hank Johnson and Atlanta Mayor Kasim Reed following a tour of the Pittsburgh Neighborhood, a recipient of HUD’s Neighborhood Stabilization Program (NSP) funds. May 21, 2010. (by Steven A. Bales)

Shaun Donovan is Secretary for Housing and Urban Development