On Saturday, President Obama delivered the commencement address at the United States Military Academy in West Point, New York.  This year one thousand and two cadets entered into the “Long Gray Line” of West Point graduates.

The class of 2010 is the ninth consecutive class to graduate while our nation is at war.  Last year, President Obama visited West Point to his strategy on Afghanistan and Pakistan.  During the commencement address the President reflected on the changing nature of the war over the past nine years: .

We face a tough fight in Afghanistan.  Any insurgency that is confronted with a direct challenge will turn to new tactics.  And from Marja to Kandahar, that is what the Taliban has done through assassination and indiscriminate killing and intimidation.  Moreover, any country that has known decades of war will be tested in finding political solutions to its problems, and providing governance that can sustain progress and serve the needs of its people.

So this war has changed over the last nine years, but it’s no less important than it was in those days after 9/11.  We toppled the Taliban regime -- now we must break the momentum of a Taliban insurgency and train Afghan security forces.  We have supported the election of a sovereign government -- now we must strengthen its capacities.  We’ve brought hope to the Afghan people -- now we must see that their country does not fall prey to our common enemies.  Cadets, there will be difficult days ahead.  We will adapt, we will persist, and I have no doubt that together with our Afghan and international partners, we will succeed in Afghanistan.

The President stressed the importance of looking beyond the immediate task at hand to building a more prosperous and peaceful future for our country and the international community.

Now even as we fight the wars in front of us, we also have to see the horizon beyond these wars -- because unlike a terrorist whose goal is to destroy, our future will be defined by what we build.  We have to see that horizon, and to get there we must pursue a strategy of national renewal and global leadership.  We have to build the sources of America’s strength and influence, and shape a world that’s more peaceful and more prosperous.

Time and again, Americans have risen to meet and to shape moments of change.  This is one of those moments -- an era of economic transformation and individual empowerment; of ancient hatreds and new dangers; of emerging powers and new global challenges.  And we’re going to need all of you to help meet these challenges.  You’ve answered the call.  You, and all who wear America’s uniform, remain the cornerstone of our national defense, the anchor of global security.  And through a period when too many of our institutions have acted irresponsibly, the American military has set a standard of service and sacrifice that is as great as any in this nation’s history.

The President also noted that “burdens of this century cannot fall on our soldiers alone.”  All of us must play a part in securing our nation’s future:

Now the rest of us -- the rest of us must do our part.  And to do so, we must first recognize that our strength and influence abroad begins with steps we take at home.  We must educate our children to compete in an age where knowledge is capital, and the marketplace is global.  We must develop clean energy that can power new industry and unbound us from foreign oil and preserve our planet.  We have to pursue science and research that unlocks wonders as unforeseen to us today as the microchip and the surface of the moon were a century ago.

Simply put, American innovation must be the foundation of American power -- because at no time in human history has a nation of diminished economic vitality maintained its military and political primacy.  And so that means that the civilians among us, as parents and community leaders, elected officials, business leaders, we have a role to play.  We cannot leave it to those in uniform to defend this country -- we have to make sure that America is building on its strengths.

The President concluded his remarks by noting that America’s campaign to defeat al Queda was “necessary and just,”  it "is not an end in itself.”

America does not fight for the sake of fighting.  We abhor war.  As one who has never experienced the field of battle -- and I say that with humility, knowing, as General MacArthur said, “the soldier above all others prays for peace” -- we fight because we must.  We fight to keep our families and communities safe.  We fight for the security of our allies and partners, because America believes that we will be safer when our friends are safer; that we will be stronger when the world is more just.

From the birth of our existence, America has had a faith in the future -- a belief that where we’re going is better than where we’ve been, even when the path ahead is uncertain.  To fulfill that promise, generations of Americans have built upon the foundation of our forefathers -- finding opportunity, fighting injustice, forging a more perfect union.  Our achievement would not be possible without the Long Grey Line that has sacrificed for duty, for honor, for country. 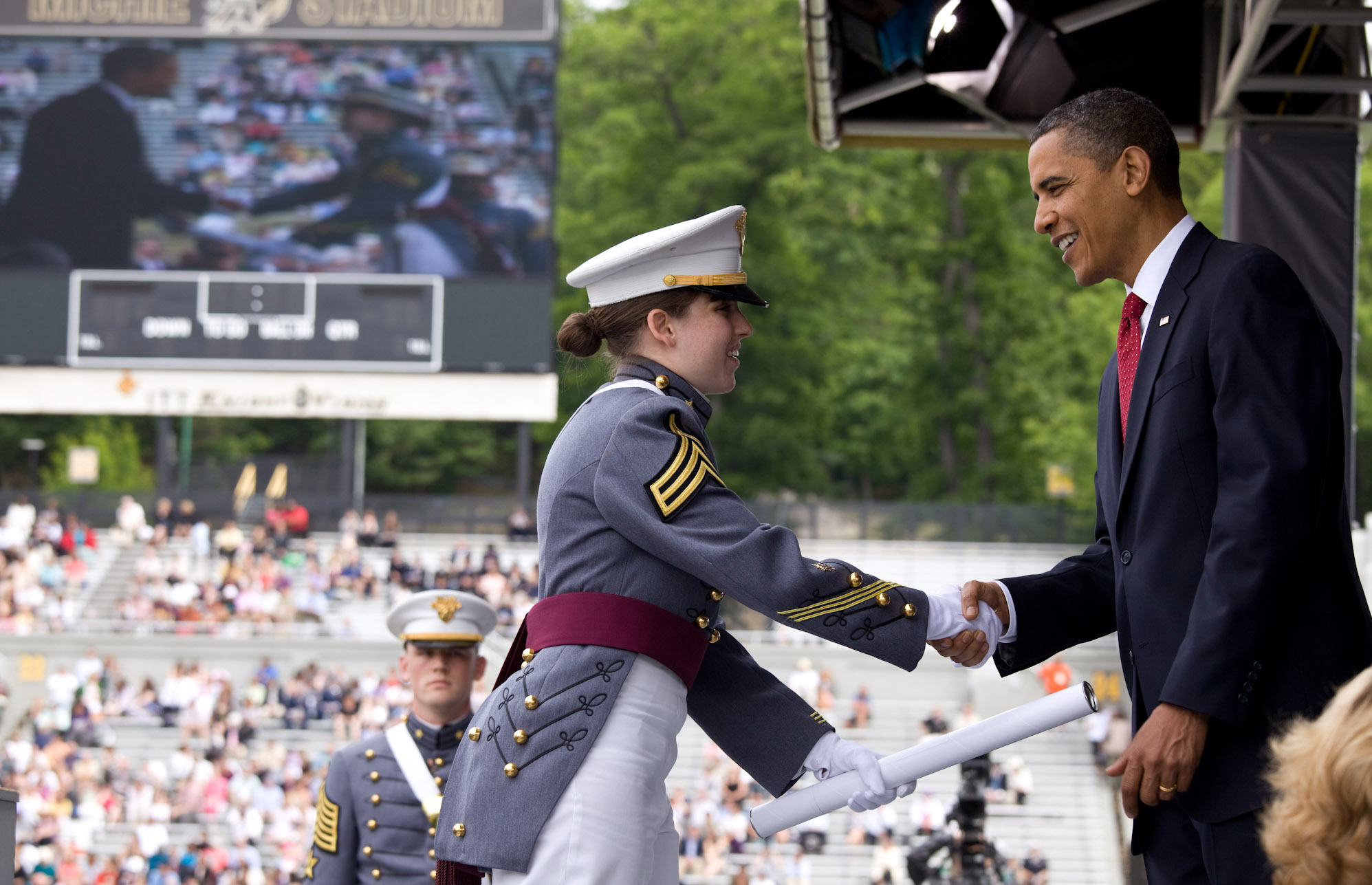 President Barack Obama hands out a diploma to one of the honor graduates of the U.S. Military Academy after delivering the commencement address at Michie Stadium in West Point, N.Y., May 22, 2010. May 22, 2010. (Official White House Photo by Pete Souza)