May 25, 2010 at 7:24 PM ET by Melissa Blaustein
Twitter Facebook Email
Summary:
The First Lady kicks off the South Lawn Series, an announcement of summer activities happening at the White House to promote physical activity and engage children from the DC community in support of Let’s Move!

This afternoon the First Lady welcomed nearly 100 local students to the White House to kick off the South Lawn Series – events throughout the summer season to bring local children, sports leagues, community programs and coaches to the South Lawn to participate in sports, games and activities. Today’s event featured sports trainers from the Washington Redskins, Capitals, Nationals and Wizards as well as PE teachers from DC Public schools who demonstrated ways for kids to get 60 minutes of active play per day. The First Lady, alongside Shellie Pfohl, Executive Director of the President's Council on Physical Fitness, moved too – taking part in obstacle courses, knee lifts and running drills.

The Series is in support of Let’s Move! – the First Lady’s initiative to end childhood obesity within a generation.  In remarks to the very first group of participants,  the First Lady stressed the importance of getting in at least 60 minutes of exercise, not just at the White House today, but everyday:

You know, there’s a report out that says kids should get no less than 60 minutes of exercise every single day.  And around the country we just got a report that shows that in states across the country, a lot of kids aren’t coming close.  They’re not getting just what they need.  And it’s hard if your schools don't have P.E. and gym, right?

If you can’t do it at school, if you don't live in a community where you have sports teams and things like that, if you can’t play outside because neighborhoods aren’t safe, right, so your parents want to keep you inside, if you’re watching too much TV and playing too many computer games -- (laughter) -- sometimes that cuts into your ability to move.

And went on to explain that the series isn’t just to get kids moving on the lawn, but will hopefully inspire lots of children to get active in their own backyards:

And this series that we’re doing on the South Lawn is really to encourage kids, because we got this press all behind you, and they're going to show you guys on TV, and there are going to be a lot of kids going, how do I do that?  You know, how do I get moving like that?  They're at the White House moving.  Maybe I can do this in my own back yard, in my own community.

So you guys are going to be the first example this summer of really encouraging kids to move.  But we are going to need you, not just here today, but you’re going to have to go home and take some of what you’ve learned here and teach your families and folks -- the other kids in your schools who haven’t had a chance to come, and figure out how you guys can get other people in your lives moving. Can you promise me that you’ll help me on this?

The White House Visitors Office, the Office of Public Engagement, and the First Lady’s office will continue to invite local Sports leagues, community programs and students to the White House throughout the summer to participate in the South Lawn Series and engage them in the Let’s Move! campaign. 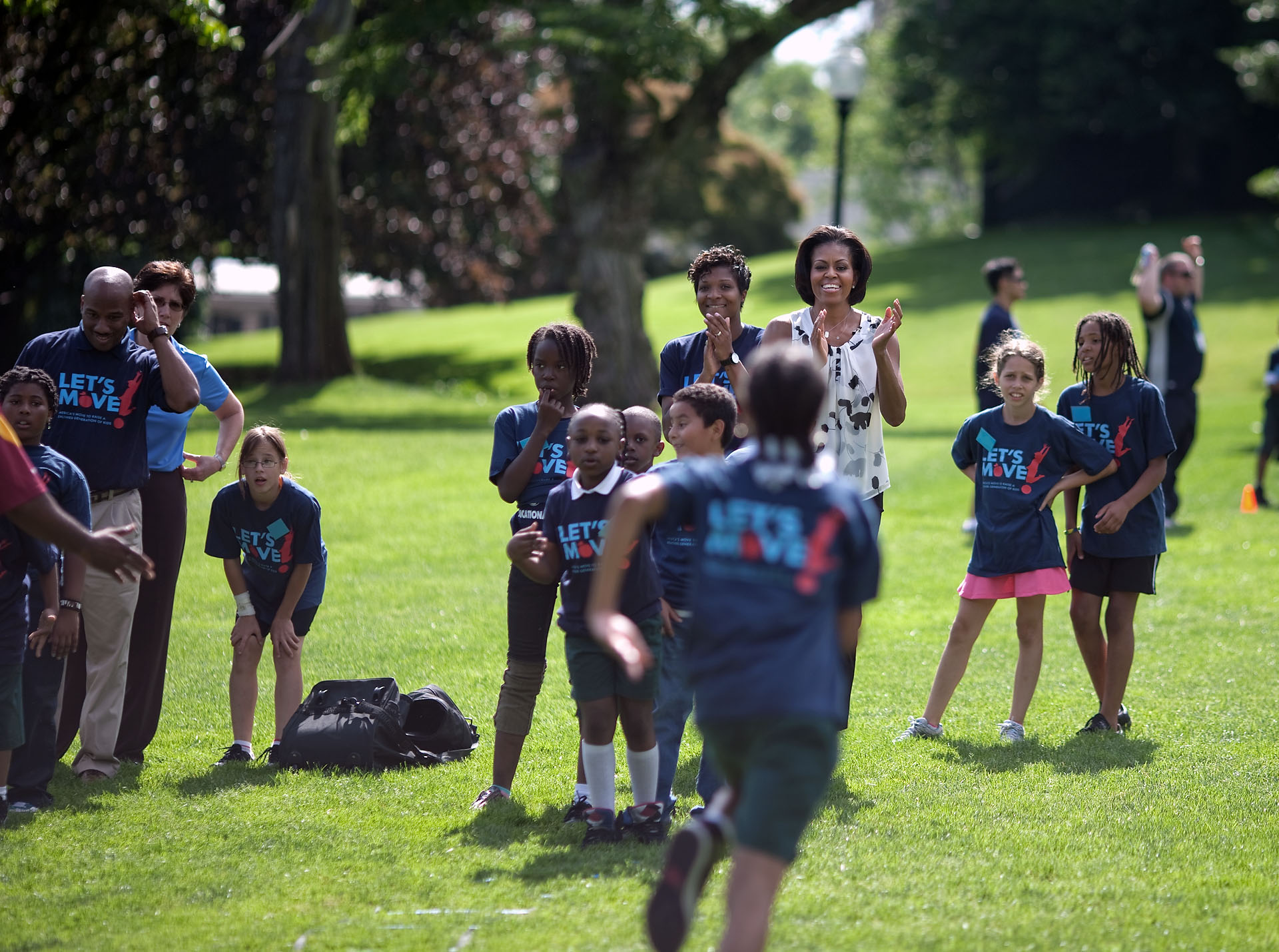 First Lady Michelle Obama cheers on local students at one of the physical activity stations set up for the Let’s Move! series kick-off on the South Lawn of the White House, May 25, 2010. (Official White House Photo by Samantha Appleton) 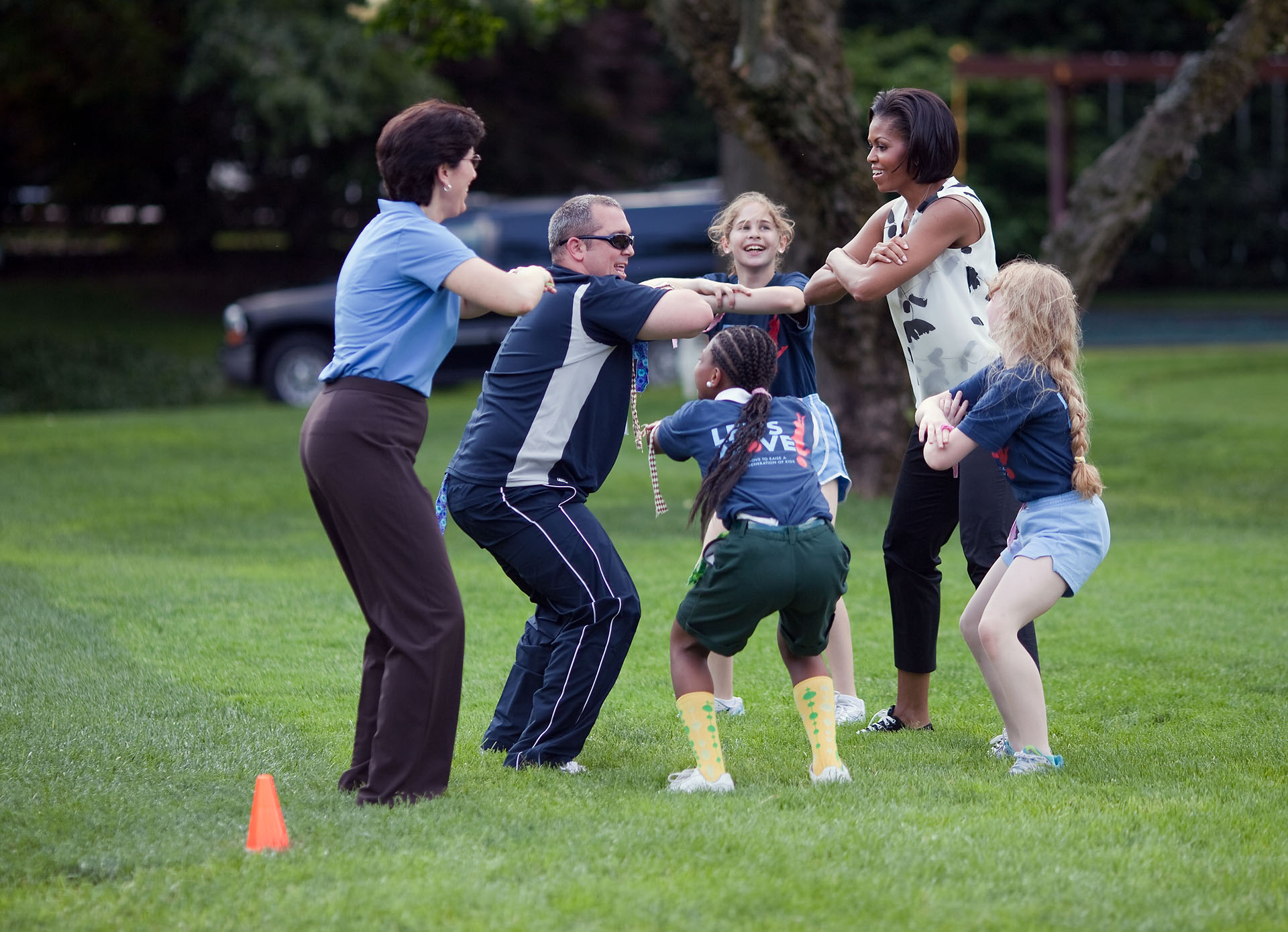