"Whatever is Necessary to Protect and Restore the Gulf Coast"

May 27, 2010 at 4:47 PM ET by Katelyn Sabochik
Twitter Facebook Email
Summary:
The President takes questions from the press on the BP oil spill, making clear that he is in charge of the response, that all hands are on deck, and that those responsible will be held accountable.

Ed. Note: For more information on Federal response resources, volunteer opportunities, and assistance for those in affected areas, visit WhiteHouse.gov/Deepwater-BP-Oil-Spill.

Watch the full video of the President’s press conference above or jump directly to the following sections by clicking the links below (questions are paraphrased):

Earlier today, the President took questions from the press at the White House on the BP Oil Spill in the Gulf of Mexico.  During his opening remarks, the President updated the American people on the “top kill” procedure that was approved yesterday.  This procedure attempts to plug the well with densely packed mud to reduce or stop the flow of oil.  It’s still too soon to tell if the procedure will work.

The President also clarified the role the Federal Government has played in the response since Day 1:

The American people should know that from the moment this disaster began, the federal government has been in charge of the response effort.  As far as I’m concerned, BP is responsible for this horrific disaster, and we will hold them fully accountable on behalf of the United States as well as the people and communities victimized by this tragedy.  We will demand that they pay every dime they owe for the damage they’ve done and the painful losses that they’ve caused.  And we will continue to take full advantage of the unique technology and expertise they have to help stop this leak.

But make no mistake:  BP is operating at our direction.  Every key decision and action they take must be approved by us in advance.  I’ve designated Admiral Thad Allen – who has nearly four decades of experience responding to such disasters – as the National Incident Commander, and if he orders BP to do something to respond to this disaster, they are legally bound to do it.  So, for example, when they said they would drill one relief well to stem this leak we demanded a backup and ordered them to drill two.  And they are in the process of drilling two.

The President emphasized that the government would do everything in it’s power to stop the leak and clean up the mess and was employing the best and brightest minds from around the country to solve this problem.  In addition to cleaning up the oil, the Administration is also focused on restoring the livelihoods of families who rely on the Gulf to make a living

We’re also doing whatever it takes to help the men and women whose livelihoods have been disrupted and even destroyed by this spill -– everyone from fishermen to restaurant and hotel owners. So far the Small Business Administration has approved loans and allowed many small businesses to defer existing loan payments.  At our insistence, BP is paying economic injury claims, and we’ll make sure that when all is said and done, the victims of this disaster will get the relief that they are owed.  We’re not going to abandon our fellow citizens.  We’ll help them recover and we will help them rebuild. 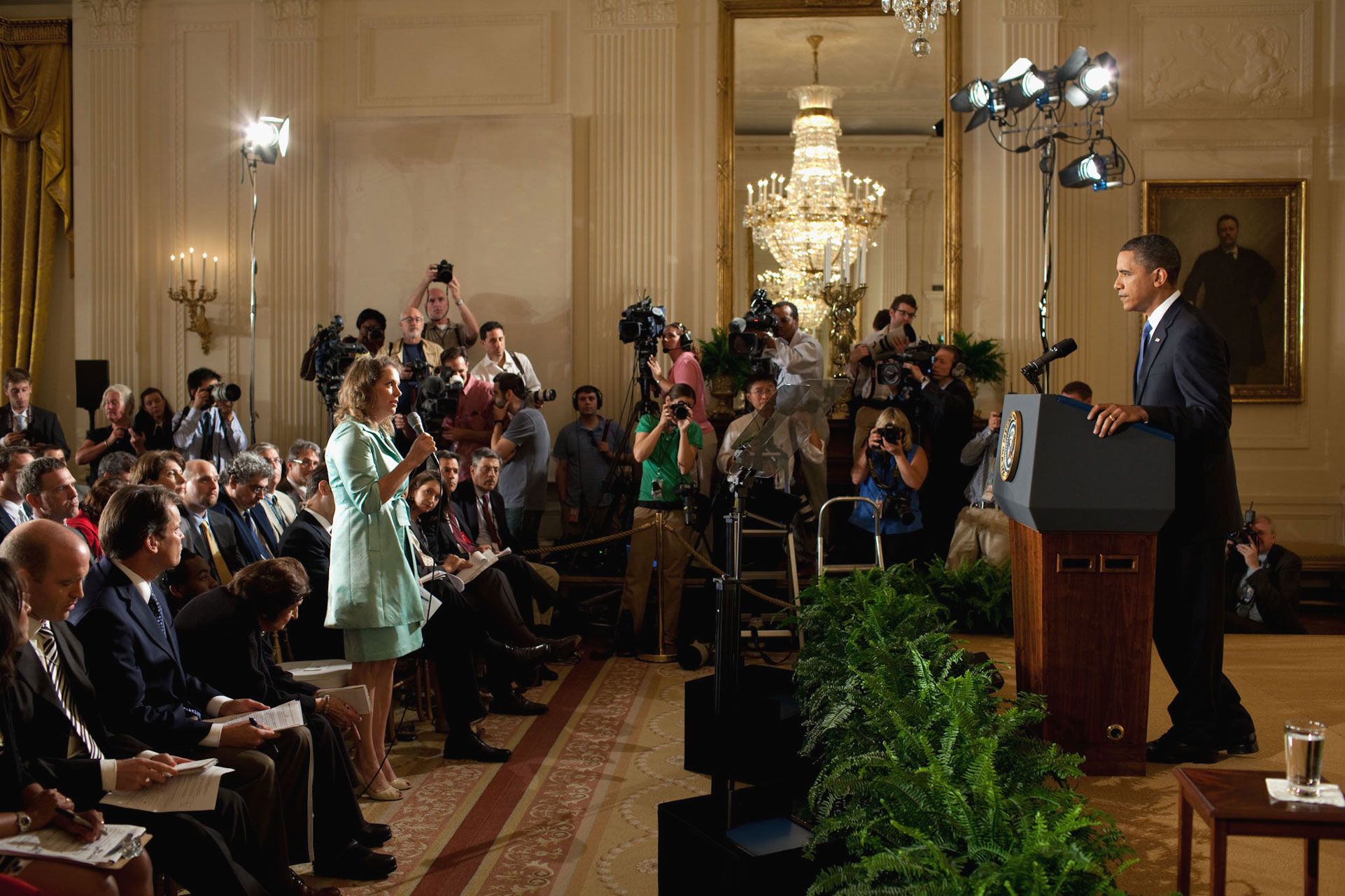 President Barack Obama delivers remarks and takes questions from the press in the East Room of the White House, May 27, 2010. (Official White House Photo by Pete Souza)

To ensure that a spill of this magnitude never happens again, President Obama outlined immediate steps the Department of the Interior will take to reform the Minerals Management Service, which is responsible for issuing drilling leases and regulating oil facilities:

Additionally, after reading the report’s recommendations with Secretary Salazar and other members of my administration, we’re going to be ordering the following actions:  First, we will suspend the planned exploration of two locations off the coast of Alaska.  Second, we will cancel the pending lease sale in the Gulf of Mexico and the proposed lease sale off the coast of Virginia.  Third, we will continue the existing moratorium and suspend the issuance of new permits to drill new deepwater wells for six months.  And four, we will suspend action on 33 deepwater exploratory wells currently being drilled in the Gulf of Mexico.

The President also made the broader point that this tragedy should serve as a “wake-up call” for Americans that our dependence on oil is not sustainable.  Focusing our resources on renewable energy will not only protect our environment, but “it will it will create a new, homegrown, American industry that can lead to countless new businesses and new jobs.”

President Obama is scheduled to make his second trip to the Gulf Coast region tomorrow. 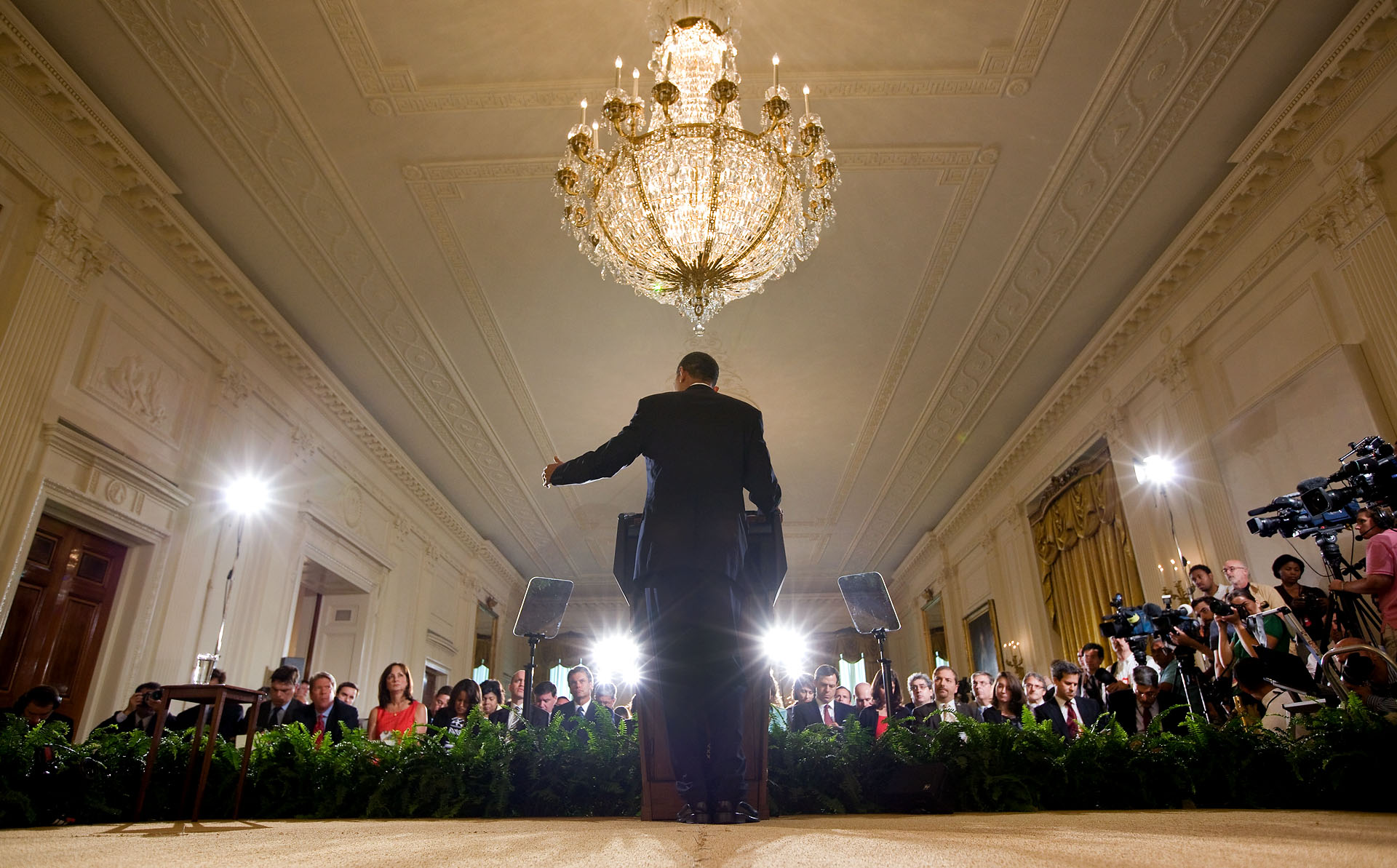 President Barack Obama delivers remarks and takes questions from the press in the East Room of the White House, May 27, 2010. (Official White House Photo by Chuck Kennedy)