June 3, 2010 at 12:44 PM ET by Mara Vanderslice
Twitter Facebook Email
Summary:
Mara Vanderslice describes an event at the White House on activities by the Administration and local faith-based and community groups to address poverty in local communties. 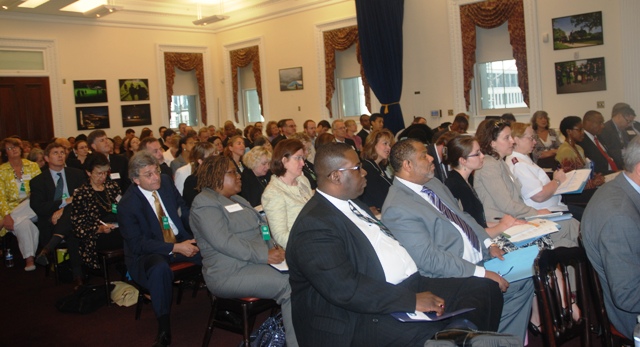 Attendees at a White House Meeting on Partnerships to Fight Poverty listen to a panel of White House and Agency policymakers. June 1, 2010.

This week, the White House hosted a national conversation on partnerships to support economic opportunity and security.  More than 100 leaders of nonprofits, advocacy organizations and faith communities participated in the half day event.  This discussion focused on efforts by both the Administration and local groups to strengthen the partnerships between government at all levels and local organizations to serve those in-need.

Our office, the White House Office of Faith-based and Neighborhood Partnerships, partnered with the Office of Public Engagement to host this conversation.  The event, was in part, inspired by the recommendations of the President’s Advisory Council on Economic Recovery and Domestic Poverty to convene such a gathering.

Policy experts from the Domestic Policy Council, National Economic Council, Office for Urban Affairs and the Office of the Vice-President joined the event to discuss Administration proposals that are being implemented to support neighborhood revitalization and economic opportunity in the most disadvantaged communities.  They also talked about proposals and activities to break down silos inside of government to make Federal benefit programs more effective.

In addition to hearing about the proposals being implemented by the Administration, the audience also heard from local leaders who are implementing programs to help people understand and apply for the federal, state and local benefits they qualify for that they might not even know about, such as the Benefit Bank, Single Stop and EarnBenefits.  From rural communities in South Carolina to urban environments like New York City, leaders described local efforts to help those in need become aware and apply for assistance for which they are eligible.  They also emphasized that importance of working with local groups, both faith-based and secular, to implement these programs.  One leader emphasized the sense of dignity that these groups brought to the clients served by their programs.

Valerie Jarrett, Senior Advisor and Assistant to the President, concluded the meeting by thanking the group for their tireless work on our shared priority of fighting poverty.

I was especially honored today to be in the room with some nation’s most prominent anti-poverty advocates and social service providers that have dedicated decades of their lives to seeking opportunity and dignity for the most vulnerable.  We hope the conversation and partnership will continue.

Mara Vanderslice serves as a Deputy Director of the White House Office of Faith-based and Neighborhood Partnerships.