"Every Child, Every Opportunity, Every Time"

The Commencement Challenge asked high schools around the country to submit an application telling the President how their school is making significant strides on personal responsibility, academic excellence and college readiness, and how they are working toward the President’s national goal of having the most college graduates by 2020. After three rounds of competition, Kalamazoo Central High School was named the winner.

The President began his remarks by congratulating the students and the Kalamazoo community on their innovative approach to education:

Together as a community, you’ve embraced the motto of this school district: “Every child, every opportunity, every time,” because you believe, like I do, that every child – regardless of what they look like, where they come from, or how much money their parents have – every child who walks through your schoolhouse doors deserves a quality education. 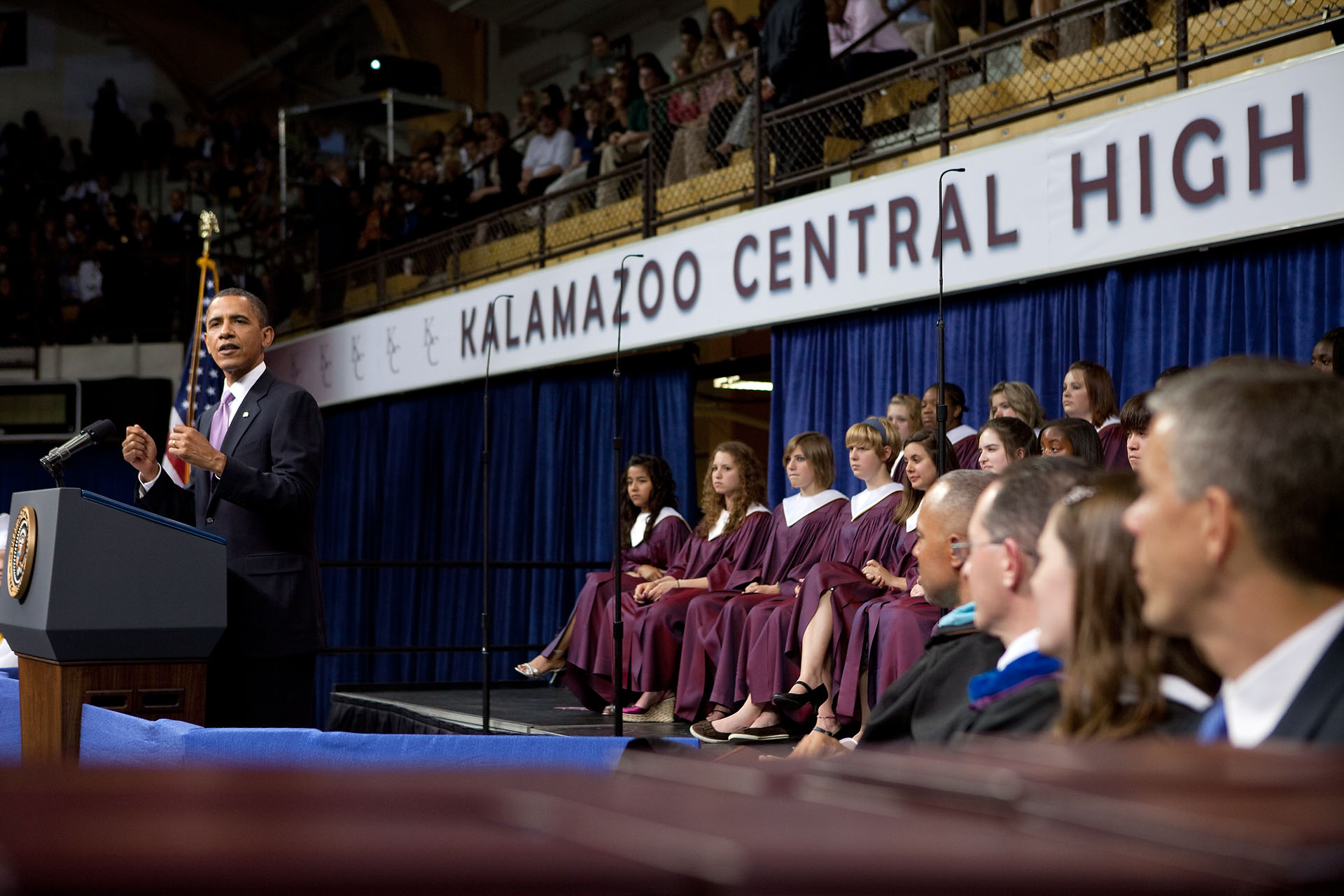 The President also took this opportunity to give the graduates some advice on navigating the waters after high school.  He told students that success is determined not by one’s circumstances but by “by how hard you try; how far you push yourself; how high you’re willing to reach.”

But meaningful achievement, lasting success – that doesn’t happen in an instant.  It’s not just about the twist of fate, or the lucky break, or the sudden stroke of genius.  Rather, it’s about the daily efforts, the choices large and small that add up over time.  It’s about the skills you build, the knowledge you accumulate, the energy you invest in every task, no matter how trivial or menial it may seem at the time.

In addition to working hard to achieve their dreams the President encouraged the class of 2010 to take personal responsibility for their successes as well as their failures:

The truth is, no matter how hard you work, you won’t necessarily ace every class or succeed in every job.  There will be times when you screw up, when you hurt the people you love, when you stray from your most deeply held values.

And when that happens, it’s the easiest thing in the world to start looking around for someone to blame.  Your professor was too hard; your boss was a jerk; the coach was playing favorites; your friend just didn’t understand.  We see it every day out in Washington, with folks calling each other names and making all sorts of accusations on TV.

But instead, you came together.  You were honest with yourselves about where you were falling short.  And you resolved to do better – to push your kids harder, to open their minds wider, to expose them to all kinds of ideas and people and experiences.

Finally, President Obama recognized the efforts of Kalamazoo students to give back to their community and encouraged them to continue to give back, even as their lives become busier:

And once you start juggling those classes and activities and that campus job; and you get caught up in your own dramas and anxieties; you may feel like you’ve got enough on your plate just dealing with your own life.  It might just be easier to turn the channel when the news disturbs you; to avert your eyes when you pass the homeless man on the street; to tell yourself that other people’s problems really aren’t your responsibility.

But think for a minute about the consequences of that approach here in this community.  What if those Kalamazoo Promise donors had said to themselves, “Well, I can pay for my kid to go to college, why should I pay for other people’s kids too?” 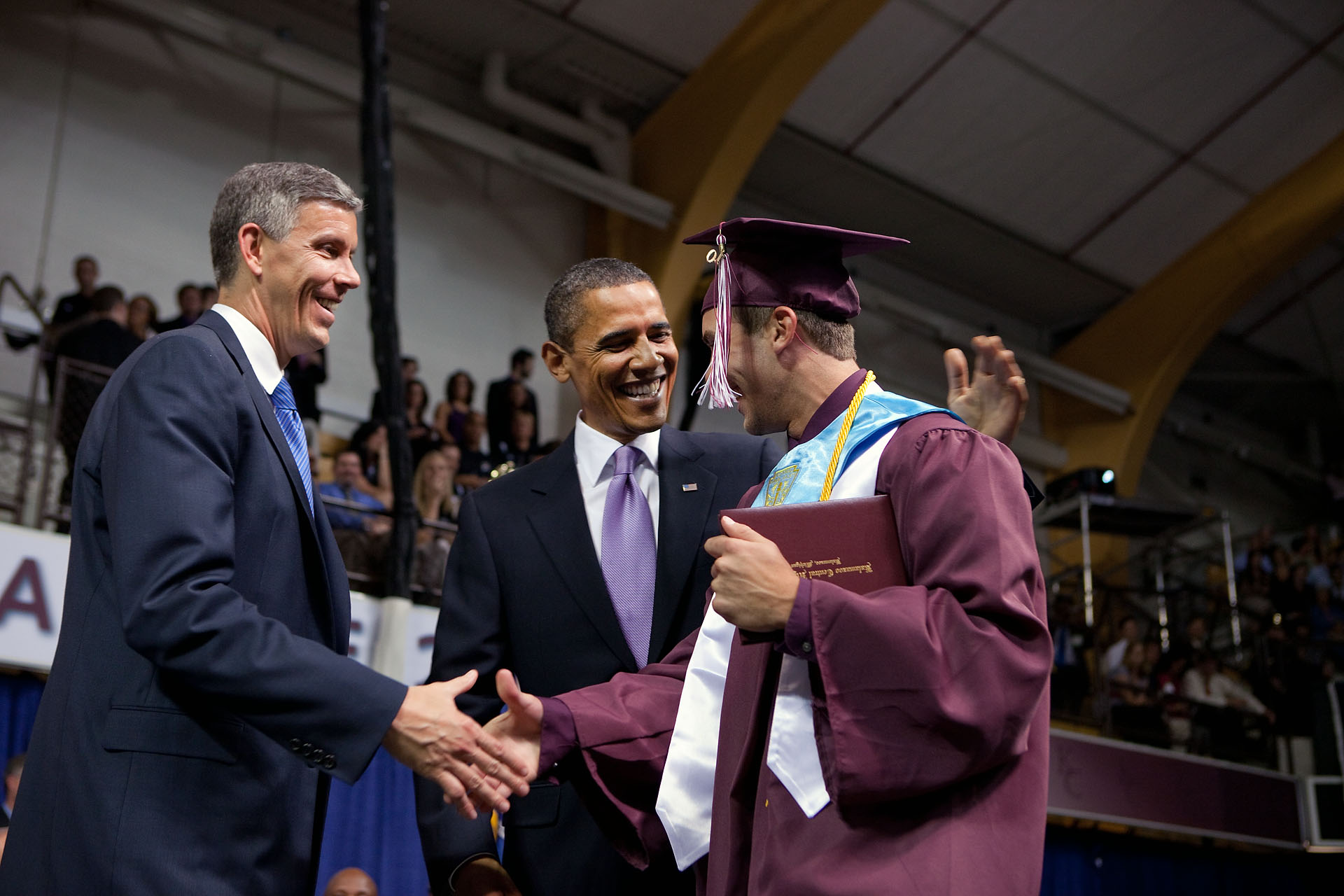