"The Toughest Sanctions Ever Faced by the Iranian Government"

June 9, 2010 at 2:46 PM ET by Jesse Lee
Twitter Facebook Email
Summary:
The President speaks on the overwhelming vote from the United Nations Security Council in favor of sanctions for Iran.
[[nid:13095]]

Speaking in the Diplomatic Room, the President wasted no time in getting to the substance of his remarks:

Today, the United Nations Security Council voted overwhelmingly to sanction Iran for its continued failure to live up to its obligations.  This resolution will put in place the toughest sanctions ever faced by the Iranian government, and it sends an unmistakable message about the international community’s commitment to stopping the spread of nuclear weapons.

For years, the Iranian government has failed to live up to its obligations under the Nuclear Non-Proliferation Treaty.  It has violated its commitments to the International Atomic Energy Agency.  It has ignored U.N. Security Council resolutions.  And while Iran’s leaders hide behind outlandish rhetoric, their actions have been deeply troubling.  Indeed, when I took office just over 16 months ago, Iranian intransigence was well-established.  Iran had gone from zero centrifuges spinning to several thousand, and the international community was divided about how to move forward.

The President recounted the repeated attempts from his Administration and the world to engage Iran diplomatically: “In short, we offered the Iranian government the prospect of a better future for its people, if – and only if – it lives up to its international obligations.”  Just as consistently, however, these offers were refused and ignored, leading to the vote today that saw support from nations in five continents, including Russia and China:

So let me repeat:  We recognize Iran’s rights.  But with those rights come responsibilities.  And time and again, the Iranian government has failed to meet those responsibilities.  Iran concealed a nuclear enrichment facility in Qom that raised serious questions about the nature of its program.  Iran further violated its own obligations under U.N. Security Council resolutions to suspend uranium enrichment.  Instead, they’re enriching up to 20 percent.  It has failed to comply fully with IAEA’s requirements.  Indeed, Iran is the only NPT signatory in the world -- the only one -- that cannot convince the IAEA that its nuclear program is intended for peaceful purposes.

That’s why the international community was compelled to impose these serious consequences.  These are the most comprehensive sanctions that the Iranian government has faced.  They will impose restrictions on Iran’s nuclear activities, its ballistic missile program, and, for the first time, its conventional military.  They will put a new framework in place to stop Iranian smuggling, and crack down on Iranian banks and financial transactions.  They target individuals, entities, and institutions -– including those associated with the Revolutionary Guard –- that have supported Iran’s nuclear program and prospered from illicit activities at the expense of the Iranian people.  And we will ensure that these sanctions are vigorously enforced, just as we continue to refine and enforce our own sanctions on Iran alongside our friends and our allies.

The President said that while nobody expects these sanctions to change behavior overnight, the vote was a concrete demonstration of the consequences of the Iranian government’s actions, and that it should give an additional push for Iran to engage diplomatically rather than be an excuse to avoid it.  He also said clearly that “these sanctions are not directed at the Iranian people,” reminding all of what happened last year:

Saturday will mark one year from the day that an election captivated the attention of the world -– an event that should have been remembered for how the Iranian people participated with remarkable enthusiasm, but will instead be remembered for how the Iranian government brutally suppressed dissent and murdered the innocent, including a young woman left to die in the street.

Actions do have consequences, and today the Iranian government will face some of those consequences.  Because whether it is threatening the nuclear non-proliferation regime, or the human rights of its own citizens, or the stability of its own neighbors by supporting terrorism, the Iranian government continues to demonstrate that its own unjust actions are a threat to justice everywhere. 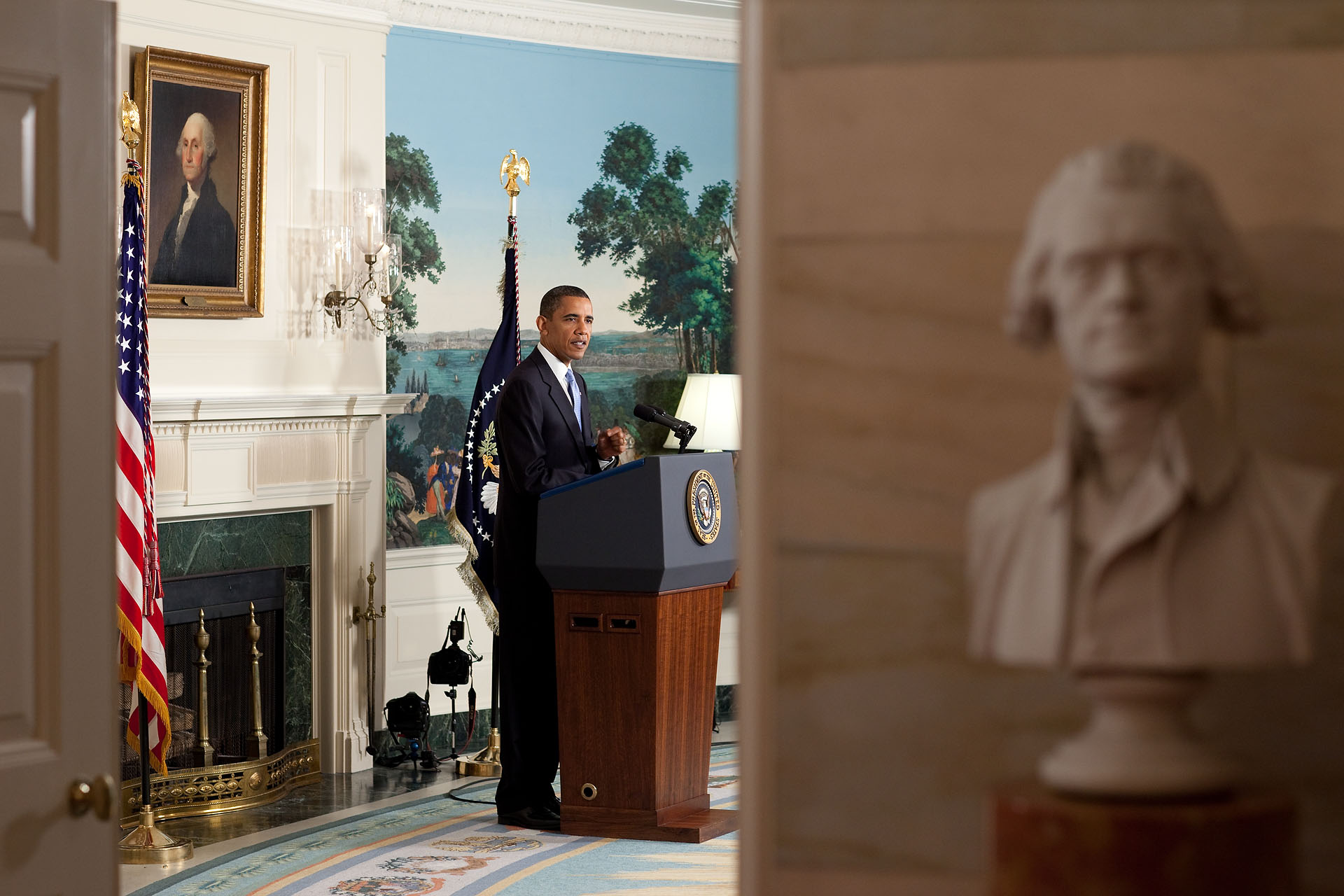 President Barack Obama speaks about the U.N. Security Council vote to impose sanctions against Iran during a statement in the Diplomatic Room of the White House, June 9, 2010. (Official White House Photo by Pete Souza)