June 11, 2010 at 6:03 PM ET by Michael Strautmanis
Twitter Facebook Email
Summary:
Michael Strautmanis blogs from South Africa, where he and the Vice President attended the opening celebrations for World Cup 2010.

The excitement for the World Cup seemed to be at a fever pitch from the moment I set foot in Johannesburg, South Africa, on Monday evening.

The blast of the horn known as the “vuvuzela” signaled our arrival in the World Cup’s host country, and the sound has followed us throughout our trip. They’re in the airport and on the streets, in the restaurants and in the hotels.  You can hear them at night ringing through the streets of Johannesburg.  They are everywhere. And I didn’t think it could get any louder.  I didn’t think the anticipation for the World Cup could grow any greater.  I was wrong.

South Africans are fired up about this event.  They are ready to host the world and ready to put on the largest sporting event on the globe.  They are excited that we are here.  They have welcomed me, and my colleagues from the White House with open arms. They remind us that South Africa is the cradle of civilization, the place that the scientists tell us modern human life began on this planet, and they have graciously welcomed us “home.”

Training Day
Yesterday, I had the privilege of visiting a state of the art soccer training center, sponsored by Nike, in Soweto.  The leaders of this public-private partnership spoke with great pride about what they have brought to this part of South Africa, an area that is still struggling with so many difficult issues.

I joined our Ambassador to South Africa, Donald Gips, and John Carlin, the author of Invictus, on a tour of this remarkable facility.  We saw several teams of young soccer players, boys and girls, drilling on the pitch. (I’ve learned a few soccer terms already!)  Through newly acquired Internet access, the players can connect to the world and burn videos of their drills on DVDs to take home with them for further practice.  Memorabilia from soccer stars are on display at the facility, including jerseys of our own Clint Dempsey, U.S. midfielder, and British striker Wayne Rooney, as well as posters from local South African players. 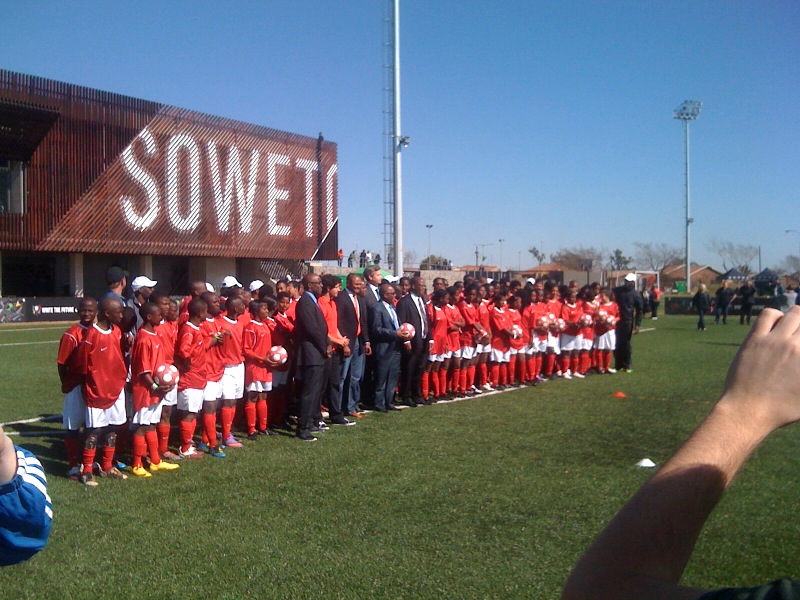 Practice halts for a group picture at the Nike soccer facility in Soweto. June 9, 2010. 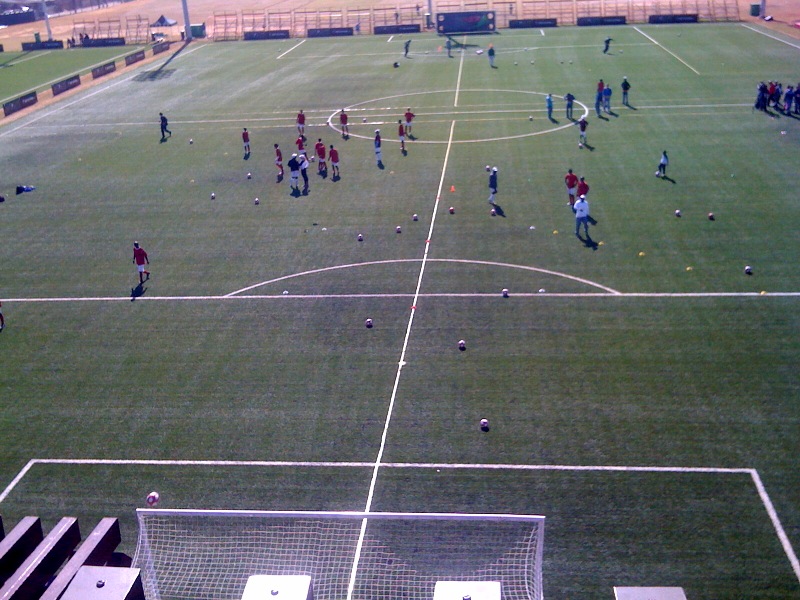 An overhead shot of practice at the Nike soccer facility in Soweto. June 9, 2010.

The training facility is the center of this community.  And it is much more than just a recreational gathering point.  For instance, HIV/AIDS testing and education is incorporated into the facility’s programming through funds provided by the U.S. Agency for International Development. It was wonderful to see such an incredible example of leaders and a community working together to build this institution in South Africa, and I couldn’t help but think of my own team’s work back in the United States.  The Office of Public Engagement and Intergovernmental Affairs is focused on working with state and local leaders, and individual citizens and groups, to encourage real change in our country, from the ground up.  And Soweto’s training facility is a striking, even if distant, reminder of the importance of that work.

As our tour of the facility wound down, we were led out of Soweto and through the streets of Johnnesburg by the vuvuzelas and the Bafana Bafana, the South Africa World Cup team, who paraded with pride amongst their adoring fans.

Nobel Peace Prize winner Archbishop Desmond Tutu greeted the crowd warmly, saying “We welcome you home!” He led the crowd in cheers for Nelson Mandela.  South African President Jacob Zulu and FIFA President Sepp Blatter welcomed the crowd, as well, speaking about the humanitarian efforts that this World Cup has brought to Africa, especially with regard to education. A great time was had by all.  And even after the last artist and last speaker had left the stage, the people stayed.  Most of the audience on the field stayed to dance, chant and celebrate this truly historic tournament in an awe-inspiring moment.  It was a sight I will never forget.

While my trip will end shortly, the memories of my time here will certainly stay with me.  The vuvuzelas.  The open arms and welcoming smiles of South Africa.  And, of course, soccer fever.
The anticipation for the actual start of the World Cup only builds.  But the wait is almost over. The U.S. has already made a strong showing off the field, with Americans buying more tickets to the World Cup than fans of any other country.  But we are all looking forward to the U.S. team making a strong showing on the field, as well.  It all begins Saturday in Rustenberg against England.  Go U.S.A!

Michael Strautmanis is the Chief of Staff to the Head of Intergovernmental Affairs and Public Engagement.