June 14, 2010 at 11:40 AM ET by Secretary Ray LaHood
Twitter Facebook Email
Summary:
Secretary of Transportation Ray LaHood discusses how the Recovery Act is helping to make our airports safer.

Cross posted from the Department of Transportation blog.

"Without the Recovery Act, we would not be here."

Those words were spoken by California Senator Barbara Boxer earlier this month as we broke ground for a new control tower at Palm Springs International Airport. The tower, which will improve safety considerably for the 71,000 takeoffs and landings each year, is one more good airport project made possible by funds from the American Recovery and Reinvestment Act. 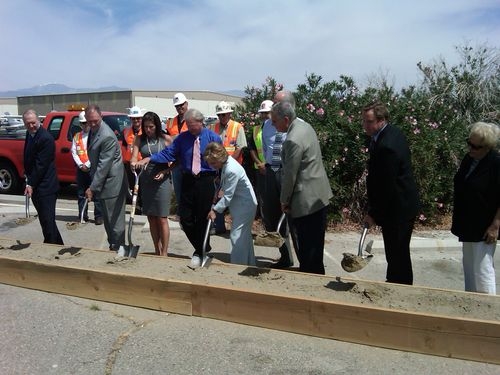 The new tower will replace a 60-foot tower built in 1967 with a 150-foot tower. Solar panels will be installed atop the structure to provide power. With an unobstructed view of the entire airport, five controllers will be able to provide safe separation for aircraft and vehicle traffic on the tarmac and in airspace within a 5-mile radius and up to 3,000 feet.

Senator Boxer said that, thanks to the Obama Administration and Congress, "We did something very important here for our community, for safety, and for jobs."

Now, the proliferation of orange cones on our nation's highways this summer are visible signs of the Recovery Act working for America. But people might not be aware of the tremendous work the Federal Aviation Administration has done through the Recovery Act to improve our nation's airports.

From March 23, 2009, the date FAA awarded its first ARRA grant, through last week, FAA has awarded 100% of its $1.1 billion in airport improvement funds. Construction is underway on all 362 airport improvement projects, and 239 of those projects are already substantially complete.

That means improved safety in airports across America. It also means over 3,000 jobs created or retained because of FAA-issued Recovery Act grants.

As California Representative George Miller noted recently, "Before this Congress and President Obama took decisive action, our nation was losing more than 750,000 jobs a month. It is clear that without the Recovery Act, our nation would be still dealing with an economic catastrophe."

The Recovery Act has enabled the FAA to improve runways, taxiways, aprons, terminals, aircraft rescue and firefighting buildings, airport equipment, noise mitigation, runway safety areas, and security.
These projects have not only meant jobs for thousands; they have also improved service and safety at US airports for everyone.

But there's more in the Recovery Act for airports than just grants. A 2-year Alternative Minimum Tax exemption for airport bonds made these bonds more attractive to investors and reduced the interest rate paid by airports. The reduced financing costs for large airport capital improvement projects means airport sponsors now have more capital to invest in good infrastructure projects.

The Recovery Act also includes provisions for Build America Bonds. These bonds provide funding for state and local governments to complete capital projects at lower borrowing costs through a federal subsidy equal to 35% of interest paid. Again, airports are using reduced interest payments on bonds to extend the improvement power of their capital investments.

Many airports are issuing taxable Build America Bonds instead of traditional municipal tax-free bonds to reduce their debt payments. Between March 2009 and June 2010, 43 airport sponsors issued approximately $14 billion in bonds, and 75% of those bonds benefit from Recovery Act provisions.

For example, Charlotte, North Carolina issued a $130 million bond in January 2010 for improvements at Charlotte Douglas International Airport. Because of the ARRA Alternative Minimum Tax exemption, the bond avoided the tax penalty usually applied to such bonds. Charlotte is using the proceeds to finance Phase II construction of its third parallel runway and associated taxiway bridges.

And, across the country from Charlotte, Los Angeles issued four bonds for Los Angeles International Airport in November 2009. Three of these bonds use the tax exemption in the Recovery Act to raise $310 million in Airport Revenue Bonds, and one of the four bonds is a $307 million Build America Bond. The proceeds from these bonds will fund terminal, airfield, apron, and parking projects.

The terminal improvements include an in-line baggage screening system, and the airfield projects include new cross-field taxiways and an important new Aircraft Rescue and Firefighting Station.
You know, when Senator Boxer spoke about the Recovery Act, she was talking about the new Palm Springs control tower. But her words ring true for FAA projects across the country.As we look at the airport projects completed over the last 16 months and those that are still underway, I think it's safe to say, "Without the Recovery Act, we wouldn't be here."

And, thanks to the Obama Administration, Congress, and the FAA's good stewardship, "here" means increased safety, improved facilities, and good construction jobs at America's airports.

Ray LaHood is Secretary of Transportation.