A Summer of Recovery

June 17, 2010 at 5:46 PM ET by Ron Sims
Twitter Facebook Email
Summary:
HUD Deputy Secretary Ron Sims writes about one of the explosion of projects coming this summer as a result of the Recovery Act.

With tens of thousands of projects funded and millions of Americans on the job today, it’s hard to believe that it’s only been 16 months since President Obama signed the American Recovery and Reinvestment Act.  And with so many jobs saved and created already, you might think that the Recovery Act’s greatest impact is behind us.

As the summer heats up, it is becoming clear that it could quite possibly be the most active season yet when it comes to recovering our economy.  There are Recovery Act-funded projects breaking ground across the country that are creating quality jobs for Americans and economic growth for businesses, large and small.

This summer is sure to be a Summer of Economic Recovery.

Today, I had the opportunity to see this first-hand during my visit to Baltimore’s Wayland Village Senior Apartments, a $13.7 million HUD Recovery Act-funded Tax Credit Assistance Program (TCAP) project that is currently under construction. When it’s complete, this development will provide 89 quality, affordable apartments for low-and moderate-income seniors and for adults with disabilities.

Although it will be several months before these seniors will be able to move into their new affordable apartments in this building, the project is already helping hundreds of Baltimore residents.  It broke ground in April, and now – just a few weeks later – there are already more than 400 people working on the site as a result. Wayland Village is a perfect example of what the Recovery Act is doing across the country to put American back to work. 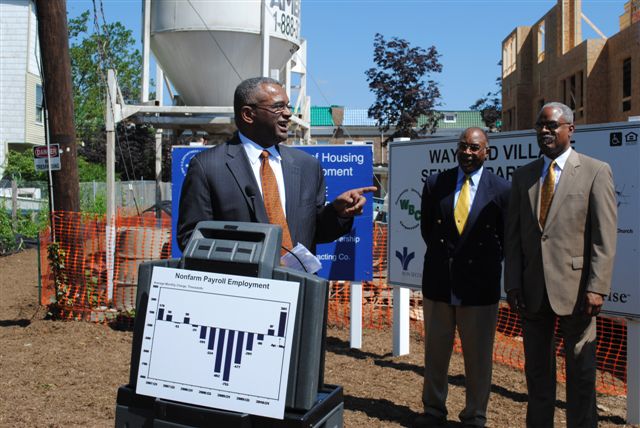 It isn’t the only example, though. By the end of this summer, HUD will have rehabilitated 230,000 housing units – which means hundreds of jobs and homes for hard-working Americans.

When it comes to the economy and job creation, our work is far from complete. But seeing Wayland Village today – and the men and women that are working on the project – it is clear to me that we are making real progress thanks to the aggressive steps President Obama took last year to repair and rebuild America’s economy.

So, with thousands of road, bridge, rail and housing projects – like the one I saw today – under construction across the country this summer, the American people will get to see first-hand the full force of Recovery Act dollars being put to work in their community – including at Wayland Village – making long-overdue infrastructure improvements, creating new opportunities for local economic growth and supporting well-paid jobs.  I am proud to say that the Recovery Act is working!

Ron Sims is Deputy Secretary of Housing and Urban Development