The Affordable Care Act -- Benefits and Weights Being Lifted

June 22, 2010 at 3:41 PM ET by Jesse Lee
Twitter Facebook Email
Summary:
The President discusses the new benefits being put in place today as part of the reforms in the Affordable Care Act, and is introduced by a mother who will truly appreciate them.

In March 2007, doctors diagnosed Amy Wilhite’s daughter, Taylor, with Acute Myeloid Leukemia (AML), a fast-growing cancer of the blood and bone marrow. Taylor received three rounds of chemotherapy and a bone marrow transplant. The cancer treatment produced multiple side effects: problems with her heart and hip, short-term memory loss, steroid-induced diabetes, and a compromised immune system. And so as one can imagine, the lifetime limit on the insurance plan that was covering Taylor was a constant worry, and as Amy explained before introducing the President today, there was always the worry pursuing a treatment now might mean they could not afford an even more important treatment later. 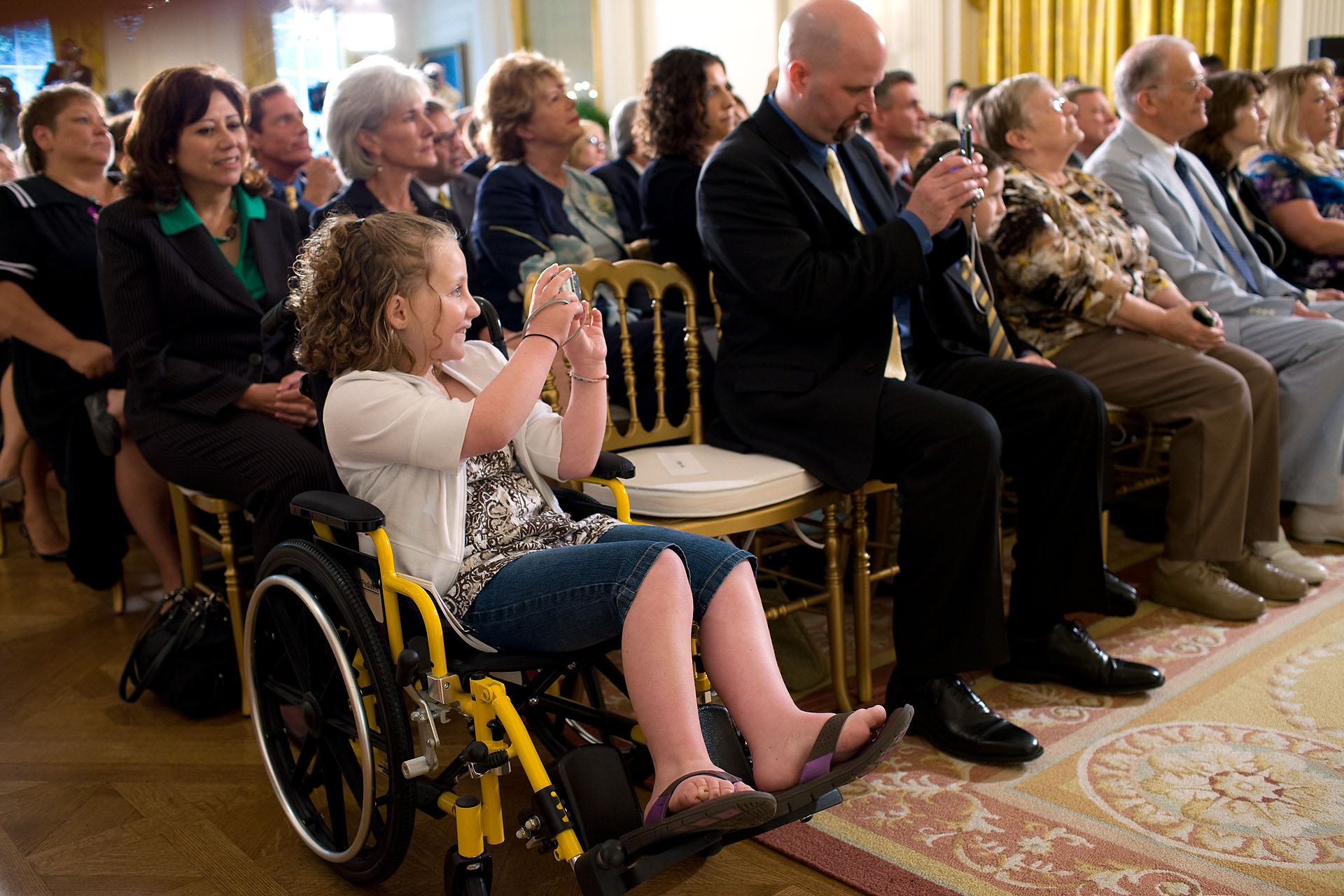 Taylor Wilhite takes a photo as her mother Amy Wilhite introduces President Barack Obama for remarks on the 90-day anniversary of the signing of the Affordable Care Act, in the East Room of the White House, June 22, 2010. (Official White House Photo by Pete Souza)

The Wilhites are just one family that will benefit from the fact that the Affordable Care Act, or Health Reform as you probably know it, will prohibit all insurance companies from imposing lifetime benefit limits for plans beginning on or after September 23, 2010.  The Wilhite family can now follow doctor's orders without having to worry about hitting a limit, which Amy described as a weight being lifted.  And that was just one of the benefits that the President spoke about this morning:

On July 1st, uninsured Americans who’ve been locked out of the insurance market because of a preexisting condition will now be able to enroll in a new national insurance pool where they’ll finally be able to purchase quality, affordable health care -- some for the very first time in their lives.  For states that opt to run their own insurance pools using funds from the new law, my administration is urging them to begin enrolling people as soon as possible.

And in a few years, once the new competitive marketplace comes online through insurance exchanges, discrimination against Americans with preexisting conditions will be banned for good.  That’s when individuals and small businesses will finally have the same access to the same types of insurance plans that members of Congress have for themselves.

And today, I’m announcing that the Departments of Health and Human Services, Labor and Treasury are issuing new regulations under the Affordable Care Act that will put an end to some of the worst practices in the insurance industry, and put in place the strongest consumer protections in our history -- finally, what amounts to a true Patient’s Bill of Rights.

This long-overdue step has one overriding focus, and that’s looking out for the American consumer.  It’s not punitive.  As I said when I met with the insurance executives, it’s not meant to punish insurance companies.  They provide a critical service.  They employ large numbers of Americans.   And in fact, once this reform is fully implemented a few years from now, America’s private insurance companies have the opportunity to prosper from the opportunity to compete for tens of millions of new customers.  We want them to take advantage of that competition.

Now, what Americans expect in return is a greater level of accountability and fairness and security.  We expect to get what we pay for.  And these rights guarantee just that -- basic rules of the road that will make America’s health care system more consumer-driven and more cost-effective, and give Americans the peace of mind that their insurance will be there when they need it -- give Amy that piece of mind that her insurance will be there when she needs it.

So, starting in September, some of the worst abuses will be banned forever.  No more discriminating against children with preexisting conditions.  No more retroactively dropping somebody’s policy when they get sick if they made an unintentional mistake on an application.  No more lifetime limits or restrictive annual limits on coverage.  Those days are over.

And I’m pleased to say that some insurance companies have already stopped these practices.  When news reports indicated that a company was dropping coverage for women diagnosed with breast cancer, my administration called on the industry to end the practice immediately -- don’t wait until September.  And soon after, the entire industry announced that it would comply with the new law early and stop the practice of dropping people’s coverage when they fall ill and need it most.

But it is important to have these steps in places to protect consumers from unjustifiable rate increases.  In fact, many states are already exercising their review authority.  We’re already seeing a wave of change that’s lifting up consumers and leveling the playing field.  Maine rejected a proposed 18 percent rate hike there.  Pennsylvania is investigating premium increases made by nine of the state’s largest insurers.  New York recently passed a law granting the state the authority to review and approve premium increases before they take effect.  And we’re working with other states and the state insurance commissioners here today to support similar efforts.  Secretary Sebelius has urged them to investigate other rate hikes.  We’ve set up a new Office of Consumer Information and Insurance Oversight to help.  And we’ll provide grants to the states that run the best, most innovative oversight programs to protect their consumers.

And beginning next year, insurance companies will be required to spend at least 80 or 85 percent of health care dollars where they should be spent -- on health care and on efforts to improve its quality.  Not on profits, not on bonuses, not on administrative costs that don’t make people healthier. 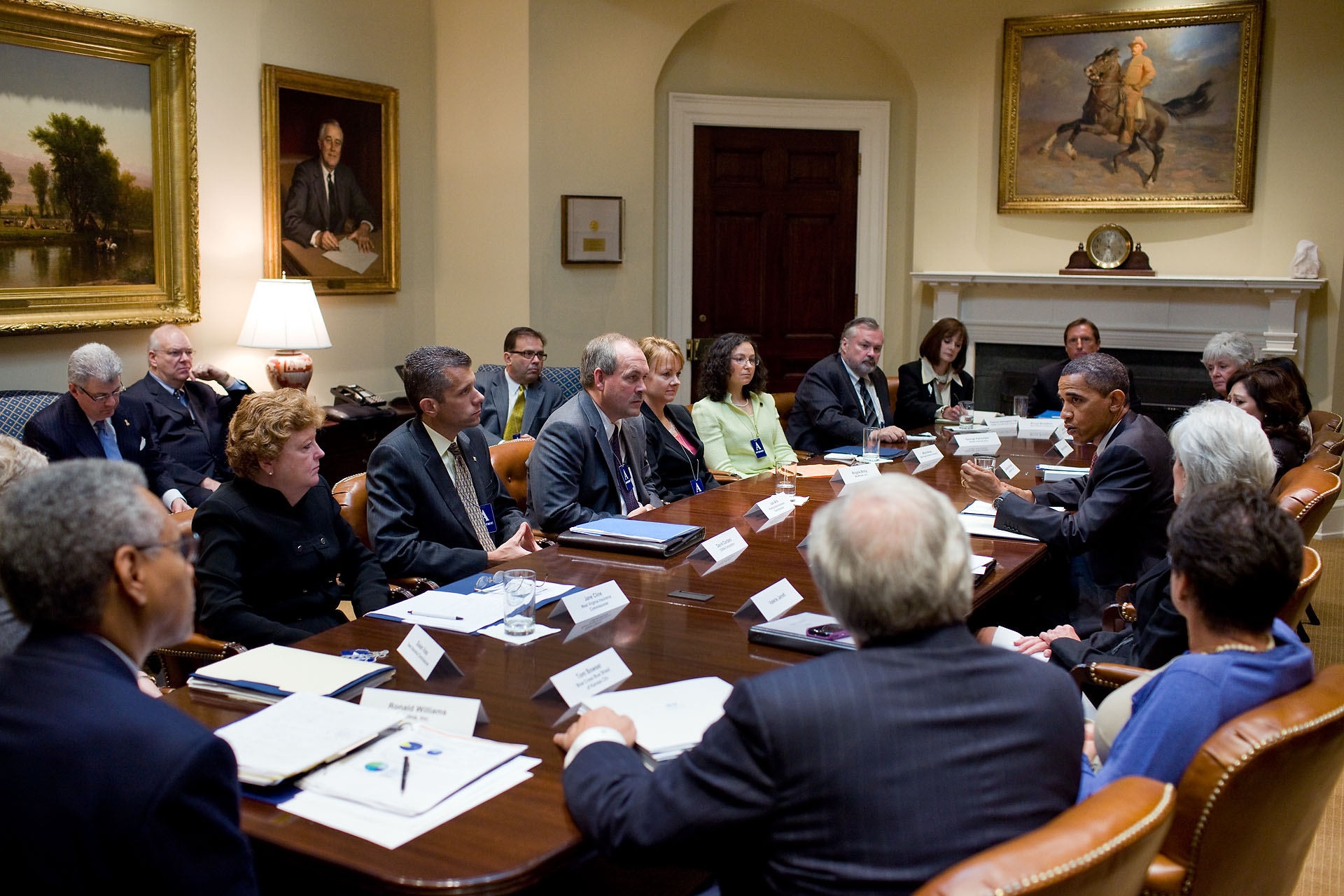