School Back in Session at the White House

July 15, 2010 at 3:18 PM ET by Maude Baggetto
Twitter Facebook Email
Summary:
While school is out this summer, President Obama is welcoming amazing kids from around the country to the White House.

Children’s groups from across the country come to the White House on a regular basis.  President Obama welcomes them with open arms, eager to reward their hard work, inspire continued success and remind them that they are the future of this country.

Here are just a few examples of recent visits.

Emotions were high as President Obama entered the room; some students cheered while others froze with open jaws.  When it came time to take photos, it was hard to say who had a larger smile on their face: President Obama or any one of the students.

In the East Room of the White House President Obama stands in the center of the second row of the 2010 United States Senate Youth Program (USSYP) delegates to Washington Week and their military officers. (Official White House Photo)

President Obama lauded the students and the military officers for their hard work and highlighted the value of public service and community organizations. When the President asked if anyone had questions, the students eagerly shot their hands up and waved them in the air. One young lady asked for advice on how to become President.  President Obama paused, and urged the students to seek something greater than a position or a mere title; he emphasized that when people truly follow their passion- whatever it may be- they will be recognized for their efforts.

As they left, the students and organizers thanked us profusely and we caught a glimpse of one student writing down the advice he received: “Don’t just be something, DO something.”

President Obama, along with First Lady Michelle Obama, is a strong believer in mentoring.  In January 2010, the President announced the White House Mentorship Program for 20 young men from local high schools.  Each student is paired with an Administration staffer for one year.   The First Lady launched her initiative, which has similar programming, for young women in November of 2009.

In the Oval Office meeting, President Obama welcomed the 2009 and 2010 champions as they walked into the Oval Office.  He thanked them for their hard work and re-emphasized the importance of mentoring.  All of the champions beamed and thanked him for his leadership and support. 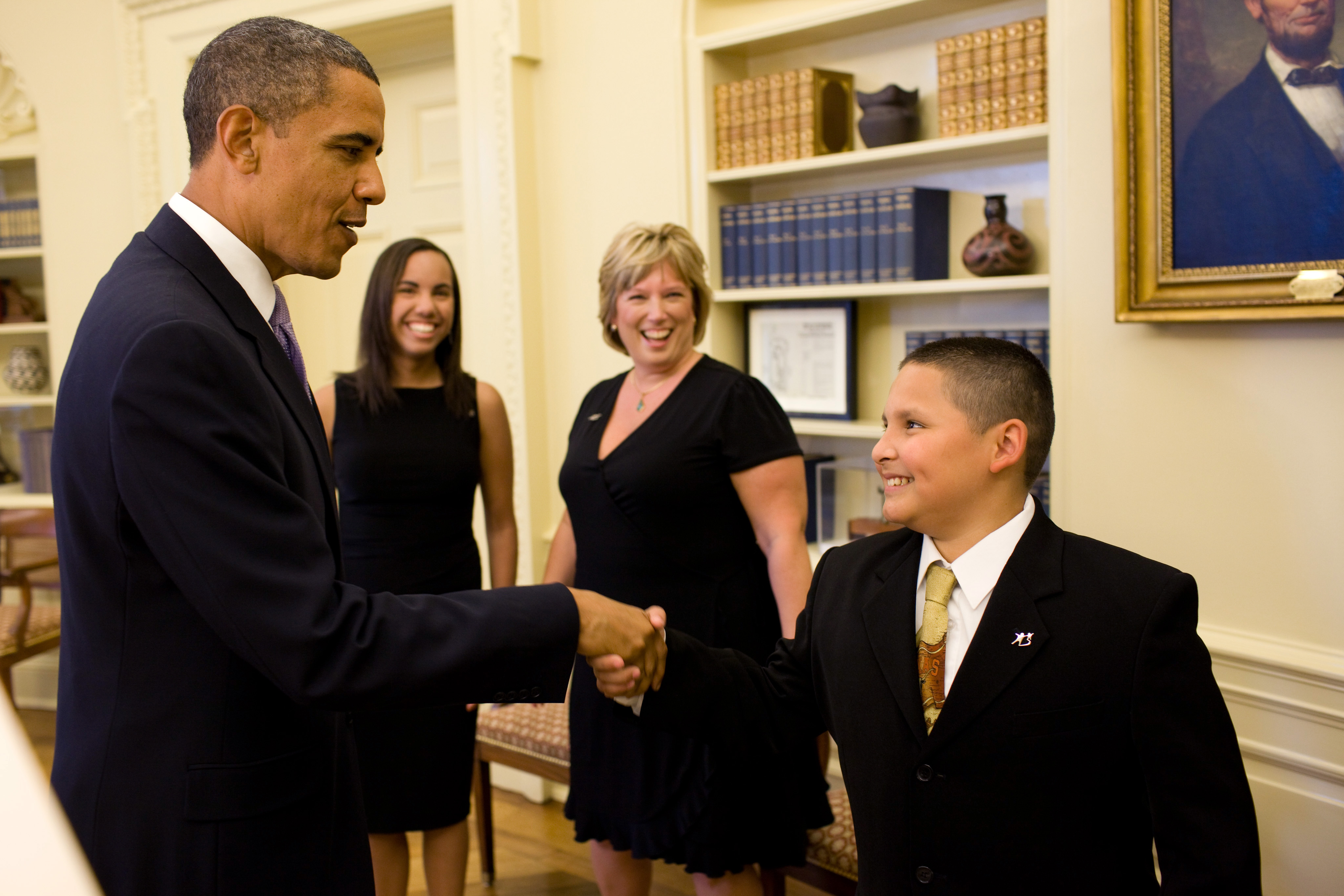 Upon leaving, the Champions exclaimed that they were very touched by the President and the fact that he knew and supported the work of Big Brother Big Sisters of America.  They could not believe that he was actually thanking them for their hard work.  I reminded the group that President Obama fully recognizes that the country is run by the hundreds of thousands of people across it not by one person.

Children's Miracle Network Champions
President Obama gladly greeted the 2010 Children’s Miracle Network (CMN) Champions and their families in the East Room of the White House this July.  CMN champions are courageous children who are chosen for bravely battling a serious injury or illness.  There are 51 champions, one from each state and one from the District of Columbia.  Every year the CMN Champions visit Washington, DC.  This year President Obama welcomed them to the White House.

Upon arrival to the White House, all 51 CMN Champions eagerly lined up and waited for the President to enter the East Room.  An uproar of cheering and waving began when President Obama entered the East Room.  The President thanked the Champions for visiting him and congratulated them on their accolades.  He told them that their courage and strength inspired him.

President Obama prepares for a photo with the CMN Champions is in the East Room. (Official White House Photo)

President Obama asked the Champions if they had any questions and nearly half their hands shot up in the air.  Their questions ranged from inquires about Bo the First Dog to living in the White House.  We now also know that President Obama’s favorite color is blue.

Upon leaving, the Champions and their families marveled at the White House and gave everyone friendly goodbyes.  The President and the White House Staff were happy they visited.  The Champion’s big smiles and positive attitudes put all hard work that goes on in the White House in perspective.