This morning the President signed yet another landmark piece of legislation putting the middle class above the special interests that for so long had a stranglehold on America's government.  To get an entertaining overview of what's involved in Wall Street Reform, from ending bailouts and holding Wall Street accountable to the strongest consumer protections ever, take a few minutes to watch our entertaining animated video or get into the nuts and bolts on our Wall Street Reform page.  At the signing ceremony, the President laid out the historical perspective as well as the perspective focused on our common future:

Passing this bill was no easy task.  To get there, we had to overcome the furious lobbying of an array of powerful interest groups and a partisan minority determined to block change.  So the members who are here today, both on the stage and in the audience, they have done a great service in devoting so much time and expertise to this effort, to looking out for the public interests and not the special interests.  (Applause.)  And I also want to thank the three Republican senators who put partisanship aside -- (applause) -- judged this bill on the merits, and voted for reform.   We’re grateful to them.  (Applause.)  And the Republican House members.  (Applause.)  Good to see you, Joe.  (Applause.)

Now, let’s put this in perspective.  The fact is, the financial industry is central to our nation’s ability to grow, to prosper, to compete and to innovate.  There are a lot of banks that understand and fulfill this vital role, and there are a whole lot of bankers who want to do right -- and do right -- by their customers.  This reform will help foster innovation, not hamper it.  It is designed to make sure that everybody follows the same set of rules, so that firms compete on price and quality, not on tricks and not on traps.

It demands accountability and responsibility from everyone. It provides certainty to everybody, from bankers to farmers to business owners to consumers.  And unless your business model depends on cutting corners or bilking your customers, you’ve got nothing to fear from reform.  (Applause.)

Now, for all those Americans who are wondering what Wall Street reform means for you, here’s what you can expect.  If you’ve ever applied for a credit card, a student loan, or a mortgage, you know the feeling of signing your name to pages of barely understandable fine print.  What often happens as a result is that many Americans are caught by hidden fees and penalties, or saddled with loans they can’t afford.

That’s what happened to Robin Fox, hit with a massive rate increase on her credit card balance even though she paid her bills on time.  That’s what happened to Andrew Giordano, who discovered hundreds of dollars in overdraft fees on his bank statement –- fees he had no idea he might face.  Both are here today.  Well, with this law, unfair rate hikes, like the one that hit Robin, will end for good.  (Applause.)  And we’ll ensure that people like Andrew aren’t unwittingly caught by overdraft fees when they sign up for a checking account.  (Applause.)

With this law, we’ll crack down on abusive practices in the mortgage industry.  We’ll make sure that contracts are simpler -– putting an end to many hidden penalties and fees in complex mortgages -– so folks know what they’re signing.

With this law, students who take out college loans will be provided clear and concise information about their obligations.

And with this law, ordinary investors -– like seniors and folks saving for retirement –- will be able to receive more information about the costs and risks of mutual funds and other investment products, so that they can make better financial decisions as to what will work for them.

So, all told, these reforms represent the strongest consumer financial protections in history.  (Applause.)  In history.  And these protections will be enforced by a new consumer watchdog with just one job:  looking out for people -– not big banks, not lenders, not investment houses -– looking out for people as they interact with the financial system. 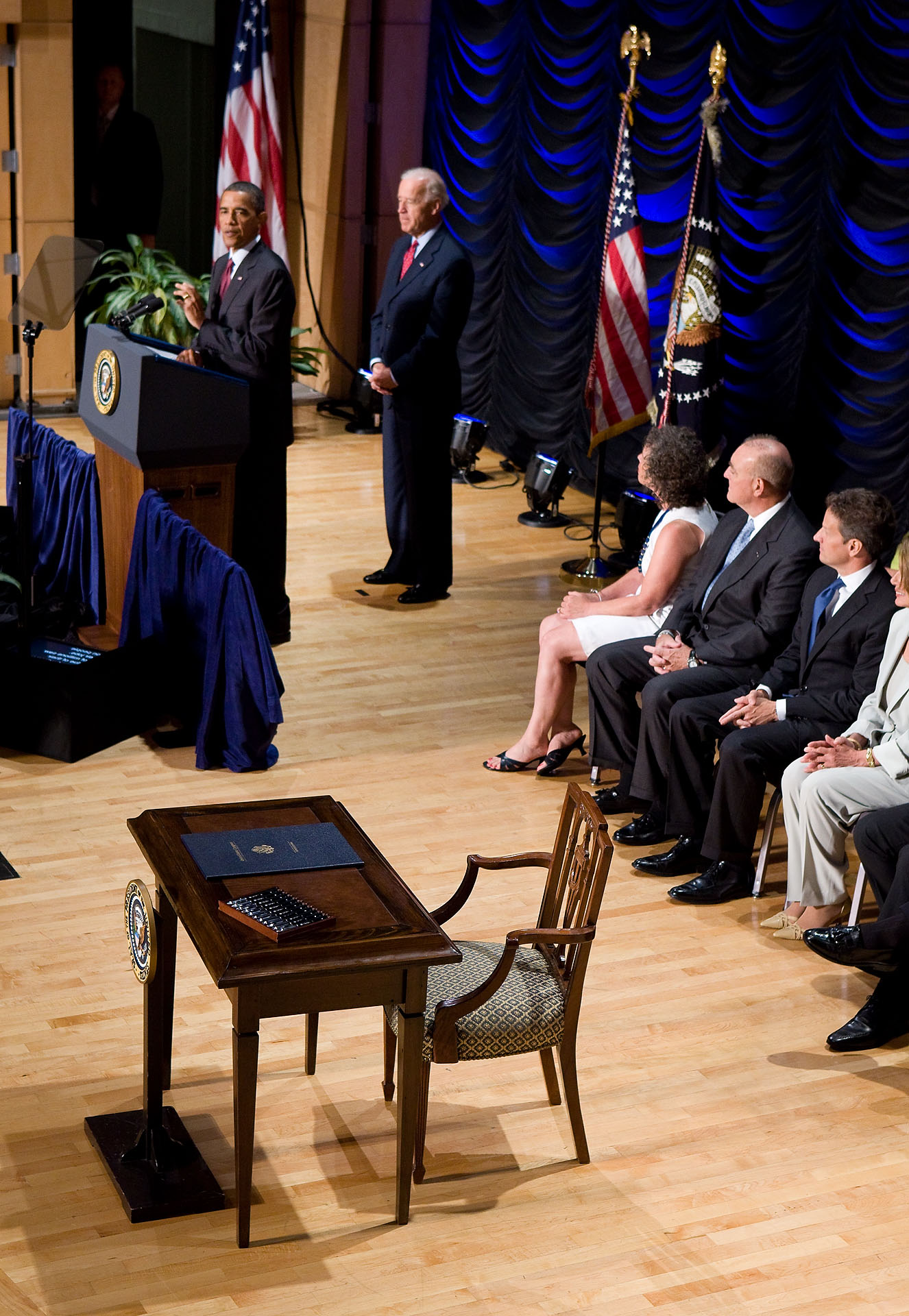