The Vice President & the Recovery Act Go to Yellowstone

Ed. Note: Also watch a video of President Obama and his family's visit to Yellowstone National Park in the summer of 2009 along with some historical context.

On Monday, I joined Vice President Biden at Yellowstone National Park as he continued his Recovery Summer tour.  Under overcast skies, we walked up a new gravel road to see the construction of the new Madison wastewater treatment plant, a $4.6 million project that will service the campground in this beautiful part of the park. This project replaces the weary wastewater plant, constructed in 1959, which was not built to meet today’s wastewater treatment needs or function throughout the year. The new design will be less visible from the main road and with its new treatment technology (better bugs as the project manager told us) no longer waft offensive odors over the campers. The work at Madison is being done by Dick Anderson Construction – a contractor based out of Bozeman, Montana. Ed Venetz, VP for the company spoke about how the ARRA funds have really helped keep his workers employed and how much he likes projects like this one in the National Parks. Ed later introduced the Vice President to a back drop of the Madison Valley and National Park Peak, the site of the legendary campfire where the idea of National Parks was born. 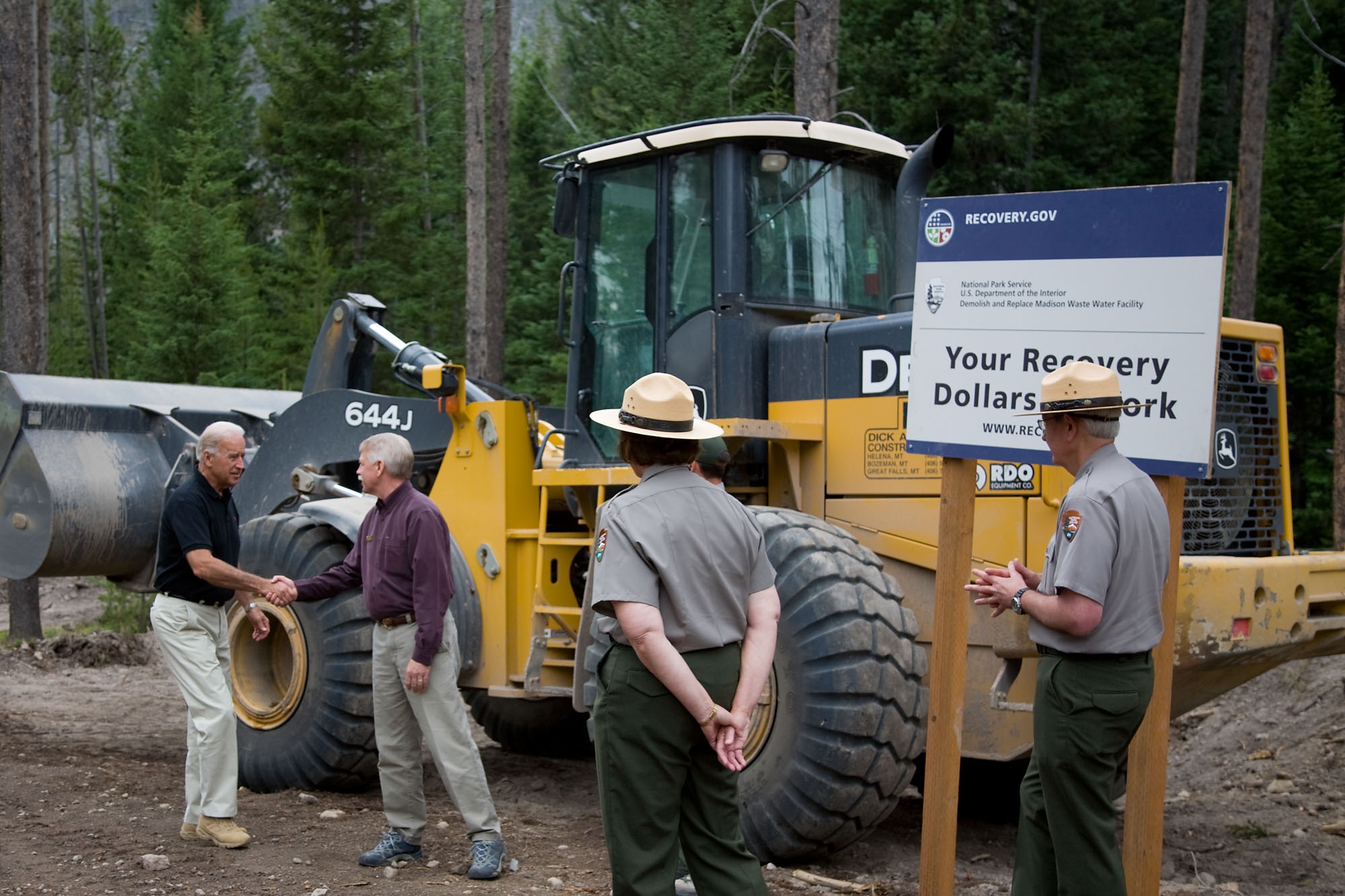 Vice President Biden’s remarks invoked fond memories of his family trips to Yellowstone and what wonderful places these are, quoting John Muir’s comment about National Parks that “we need beauty as well as bread.”  He also spoke of how the Recovery Act, and projects like this one at Madison, not only bring jobs to the area and help the economy, but they make the parks more accessible while reducing the human footprint. As Director, I greatly appreciated the Vice President’s obvious knowledge of the national parks, and his desire to improve them for all visitors.

In total, we are investing $11.4 million in six Recovery projects at Yellowstone, including repaving roads, improving employee housing, and installing a small hydroelectric facility to reduce the park’s consumption of coal fired power. These are just a few of the 800 Recovery Act projects underway at National Parks this summer – eight times as many as there were last summer. Overall, the National Park Service received $750 million from Recovery Act to help upgrade facilities, improve the visitor’s experience, and preserve this country’s national treasures for generations to come. The National Park Service’s funds are part of the $3 billion that the Department of the Interior, under Secretary Salazar’s leadership, is investing in protecting America’s great outdoors.