President Obama on Education: “The Status Quo is Morally Inexcusable”

July 29, 2010 at 2:11 PM ET by Katelyn Sabochik
Twitter Facebook Email
Summary:
President Obama delivers an address on education at the Urban League’s 100th Anniversary Convention highlighting the steps his Administration has taken over the past eighteen months to improve the education system in America.
[[nid:18962]]

Today, President Obama delivered an address on education at the Urban League’s 100th Anniversary Convention highlighting the steps his Administration has taken over the past eighteen months to improve the education system in America.  The President stated that education reform is a top priority for his Administration because the “status quo is morally inexcusable, it’s economically indefensible, and all of us are going to have to roll up our sleeves to change it.”

The President began his remarks by discussing the importance of education for the success of our economy and our nation:

Many of the jobs of the 21st century will require college degrees, and the President stressed the importance making higher education both accessible and affordable:

Now, because a higher education has never been more important –- or more expensive -– it’s absolutely essential that we put a college degree within reach for anyone who wants it.  And that’s why we’re making higher education more affordable, so we can meet the goals I’ve set of producing a higher share of college graduates than any other nation by 2020.  I want us to be back at number one instead of number 12.

And in pursuit of that goal, we eliminated taxpayer subsidies to big banks.  We saved tens of billions of dollars, and we used those savings to open the door to additional financial aid -- to open the door for college to millions more students.  This is something that a lot of you may not be aware of, but we have added tens of billions of dollars that were going to bank middlemen, so that that money is now going to students -- millions more students who are getting scholarships to go to college.  That’s already been done.

The President also highlighted the Race to the Top program – an initiative to encourages states to reform their education laws and policies to compete for additional federal grand dollars:

And so far, the results have been promising and they have been powerful.  In an effort to compete for this extra money, 32 states reformed their education laws before we even spent a dime. The competition leveraged change at the state level.  And because the standards we set were high, only a couple of states actually won the grant in the first round, which meant that the states that didn’t get the money, they’ve now strengthened their applications, made additional reforms.  Now 36 have applied in the second round, and 18 states plus the District of Columbia are in the running to get a second grant.

Some critics of Race to the Top have voiced concerns that the program doesn’t do enough to help minority children, a charge the President address head-on in his remarks:

So the charge that Race to the Top isn’t targeted at those young people most in need is absolutely false because lifting up quality for all our children -- black, white, Hispanic -- that is the central premise of Race to the Top.  And you can’t win one of these grants unless you’ve got a plan to deal with those schools that are failing and those young people who aren’t doing well.  Every state and every school district is directly incentivized to deal with schools that have been forgotten, been given up on.

The President also addressed how the Race to the Top program helps teachers and students by providing the support teachers need to be successful while still holding them accountable for results in the classroom:

The whole premise of Race to the Top is that teachers are the single most important factor in a child’s education from the moment they step into the classroom.  And I know firsthand that the vast majority of teachers are working tirelessly, are passionate about their students, are often digging into their own pockets for basic supplies, are going above and beyond the call of duty.

So I want teachers to have higher salaries.  I want them to have more support.  I want them to be trained like the professionals they are –- with rigorous residencies like the ones that doctors go through.   I want to give them a career ladder so they’ve opportunities to advance, and earn real financial security.  I don't want talented young people to say I’d love to teach but I can’t afford it.

So I am 110 percent behind our teachers.  But all I’m asking in return -- as a President, as a parent, and as a citizen -- is some measure of accountability.  So even as we applaud teachers for their hard work, we’ve got to make sure we’re seeing results in the classroom.  If we’re not seeing results in the classroom, then let’s work with teachers to help them become more effective.  If that doesn’t work, let’s find the right teacher for that classroom.

Finally, the President addressed the issue of raising standards for students, teachers and schools to help achieve better outcomes:

So here’s what Race to the Top says:  Instead of Washington imposing standards from the top down, let’s challenge states to adopt common standards voluntarily, from the bottom up.  That doesn’t mean more standards; it means higher standards, better standards, standards that clarify what our teachers are expected to teach and what our children are expected to learn -– so high school graduates are actually prepared for college and a career. I do not want to see young people get a diploma but they can’t read that diploma.

Now, so far, about 30 states have come together to embrace and develop common standards, high standards.  More states are expected to do so in the coming weeks.  And by the way, this is different from No Child Left Behind, because what that did was it gave the states the wrong incentives.  A bunch of states watered down their standards so that school districts wouldn’t be penalized when their students fell short.  And what’s happened now is, at least two states -– Illinois and Oklahoma –- that lowered standards in response to No Child Behind -- No Child Left Behind -- are now raising those standards back up, partly in response to Race to the Top. 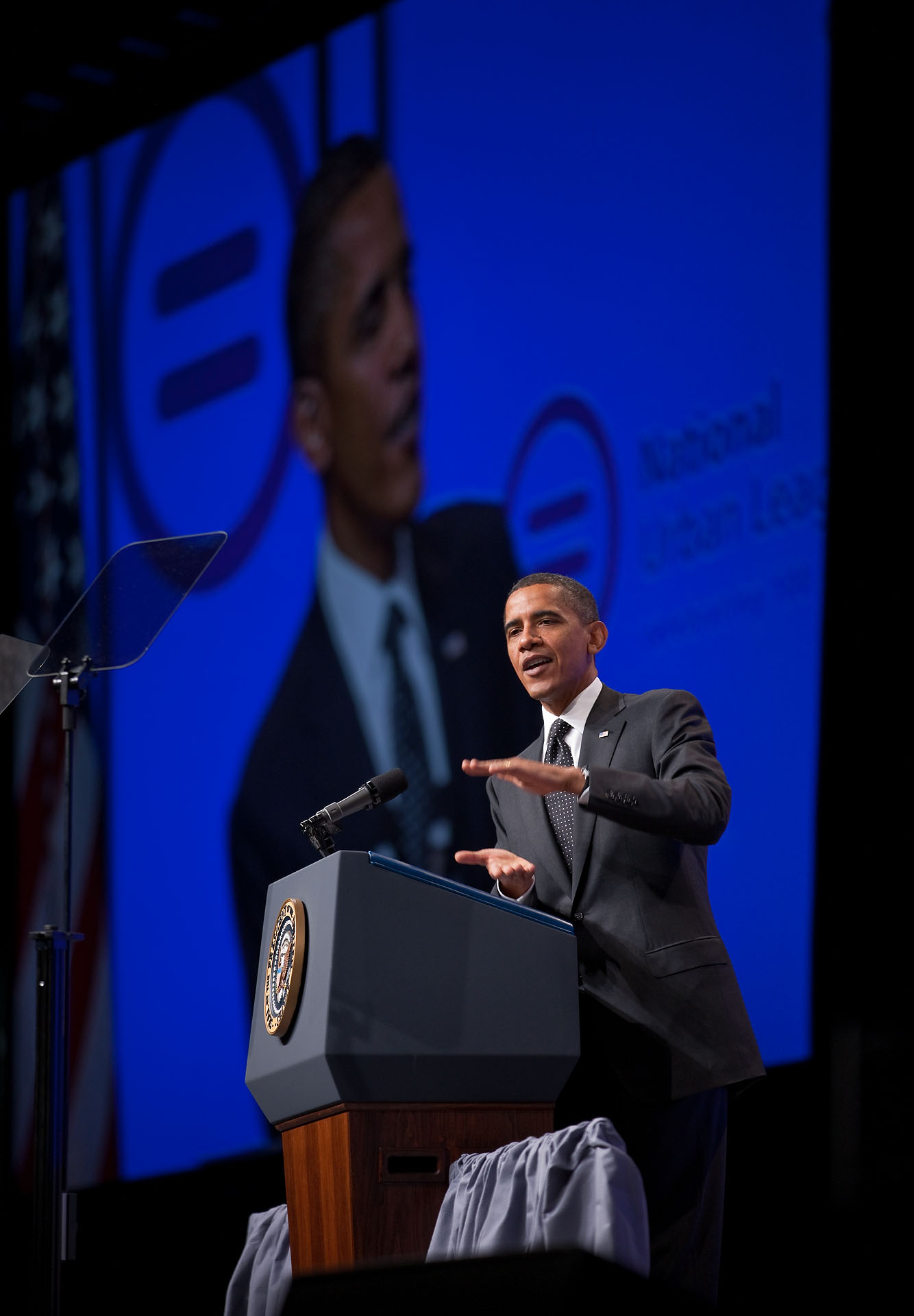 President Barack Obama delivers remarks during the Urban League Centennial Conference at the Washington Convention Center in Washington, D.C., July 29, 2010. The President delivered a speech on education discussing how the Race To The Top program, and other initiatives, are driving education reform across the country and focusing the nation on the goal of preparing students for college and careers. July 29, 2010. (Official White House Photo by Chuck Kennedy)