Advance Estimate of GDP for 2010:Q2 and GDP Revisions

Today’s report shows that real GDP, the total amount of goods and services produced in the country, grew at a 2.4% annual rate in the second quarter of this year, the fourth straight quarter of positive growth.  Growth in the first quarter was revised up to 3.7%, meaning that growth has averaged over 3% for the first half of 2010.  This solid rate of growth indicates that the process of steady recovery from the recession continues.  Nevertheless, faster growth is needed to bring about substantial reductions in unemployment.  Much work clearly remains to be done before the U.S. economy is fully recovered.  The comprehensive data revisions released with the report provide further evidence of just how severe the recession has been: the fall in GDP between 2007:Q4 and 2009:Q2 was 4.1%, making this the deepest recession since 1947

The overall growth of GDP in the second quarter of 2.4% was divided across the various components of output and demand in a way that suggests balanced recovery.  Consumer expenditures rose at an annual rate of 1.6%, down slightly from the first quarter, but more rapid than in the fourth quarter of last year.  Fixed investment (that is, investment in nonresidential structures, equipment and software, and housing) grew at an annual rate of 19.1%, the fastest pace since 1983.  Business investment in equipment and software increased by over 20% for the second consecutive quarter, indicating a welcome return to investment by private firms.  Inventory investment contributed just over 1 percentage point to GDP growth, substantially less than in the previous two quarters.  Thus, the steady growth occurred with relatively little inventory bounce.

In addition to the solid growth in the second quarter, real GDP growth in the first quarter was revised up substantially to 3.7%.  Growth has averaged over 3% for the first half of the year.

Moderate, sustained GDP growth is a vast improvement over the terrible declines in GDP of late 2008 and early 2009, and reassuring given the turbulence in financial markets following debt problems in Europe.  However, growth is below the rapid rate of increase needed to bring the unemployment rate down quickly.  For this reason, it is essential that Congress take the additional targeted actions that the President has recommended to further stimulate growth and job creation, such as increased lending and additional tax cuts for small businesses, aid to state and local governments to prevent the layoffs of hundreds of thousands of teachers, firefighters, and police, and tax credits to promote energy efficiency and clean energy manufacturing.

The comprehensive GDP data revisions, which are released each July, show that the recession was deeper than previously reported, particularly in the second half of 2008.  GDP growth in 2008:Q3 was revised down from -2.7% to -4.0%, and growth in 2008:Q4 was revised down from -5.4% to -6.8%.  Growth in 2009:Q1, on the other hand, was revised up from -6.4% to -4.9%.  It now appears that the financial crisis may have affected production substantially more quickly than was previously reported or realized at the time.  But, the revised data also emphasize the dramatic positive shift in GDP growth over the past year and a half—from a decline of 6.8% in the last quarter of 2008 to 2.4% in the most recent quarter.

Overall, the decline in GDP from its high in 2007:Q4 to its low in 2009:Q2 was 4.1%, making this recession the deepest since the official quarterly data began in 1947.  Since 2009:Q2, GDP has risen 3.2%.  That real GDP has not yet returned to its previous peak, much less its long-run trend path, emphasizes how much work remains before the U.S. economy is fully and truly recovered.

The data revisions, together with recent estimates, also provide some important new information about longer-run trends.  Revisions to both personal income and consumer spending have led to estimates of the personal saving rate in 2008 and 2009 that are substantially higher than previously reported.  The average saving rate in 2009, for example, is now 5.9%, 1.7 percentage points higher than previously reported.  In 2010:Q2, the saving rate is 6.2%.  This higher saving rate is consistent with estimates reported in the Economic Report of the President of likely consumer behavior in the wake of the financial crisis.  The higher level also suggests that there is room for further consumer spending growth as consumers become more confident, without returning to the very low saving rates of the past decade. 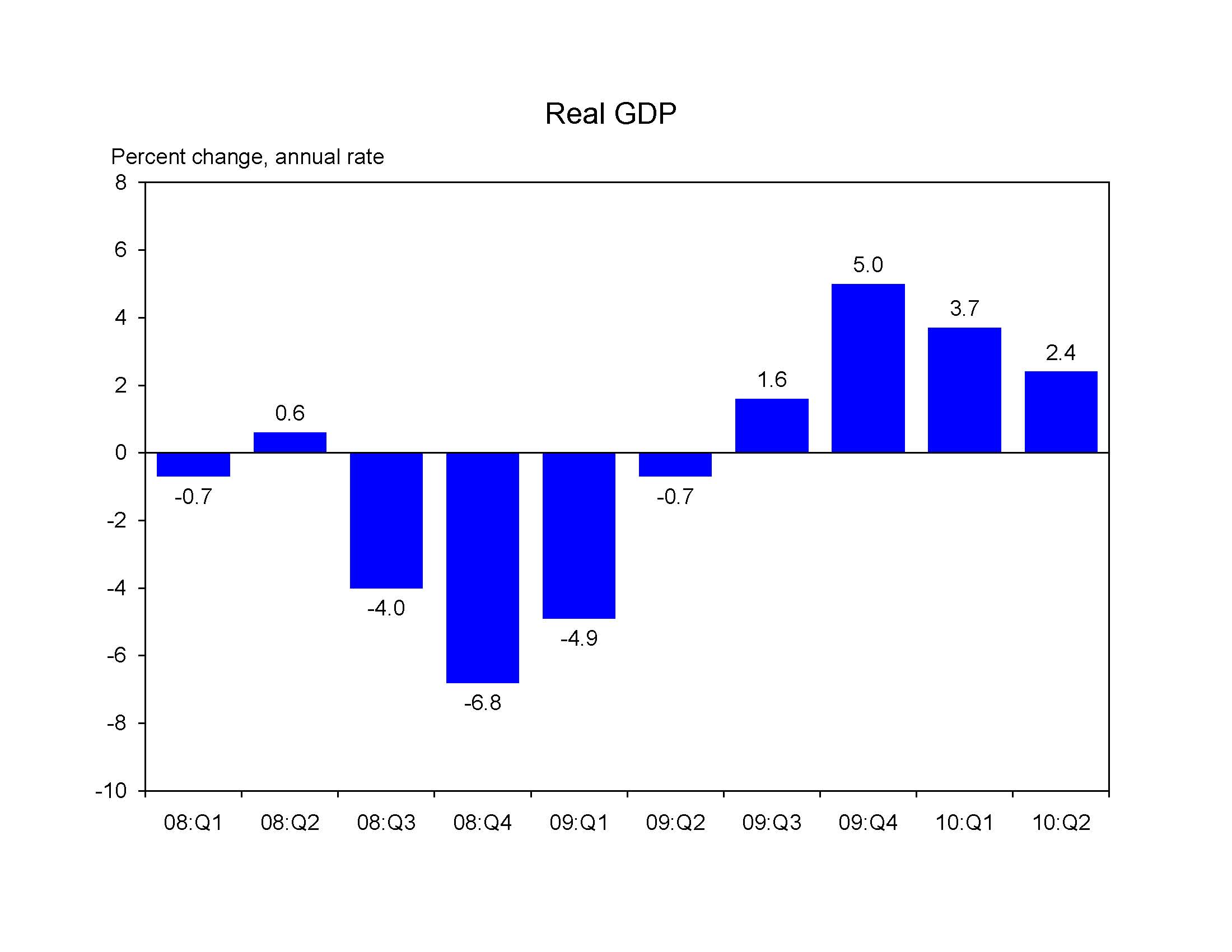 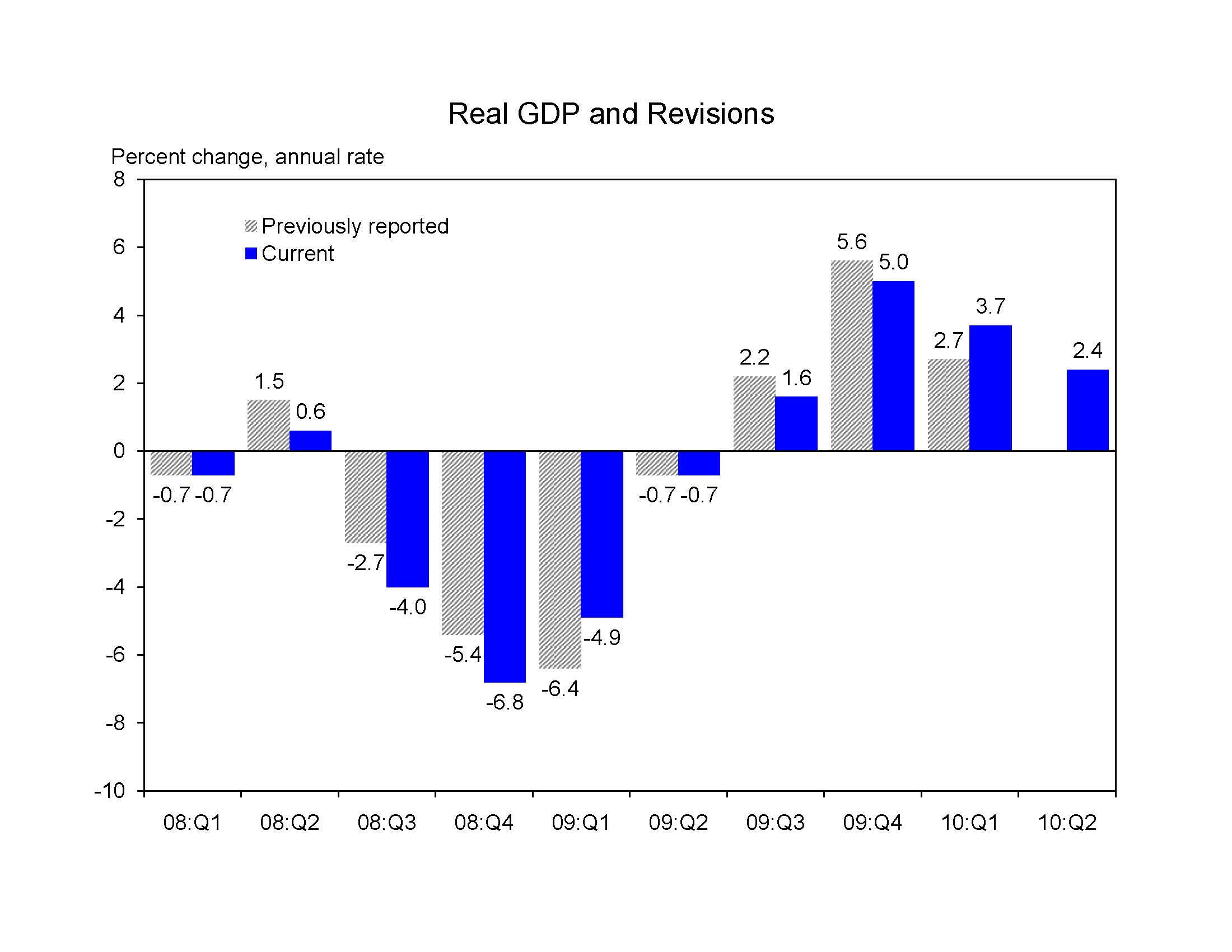 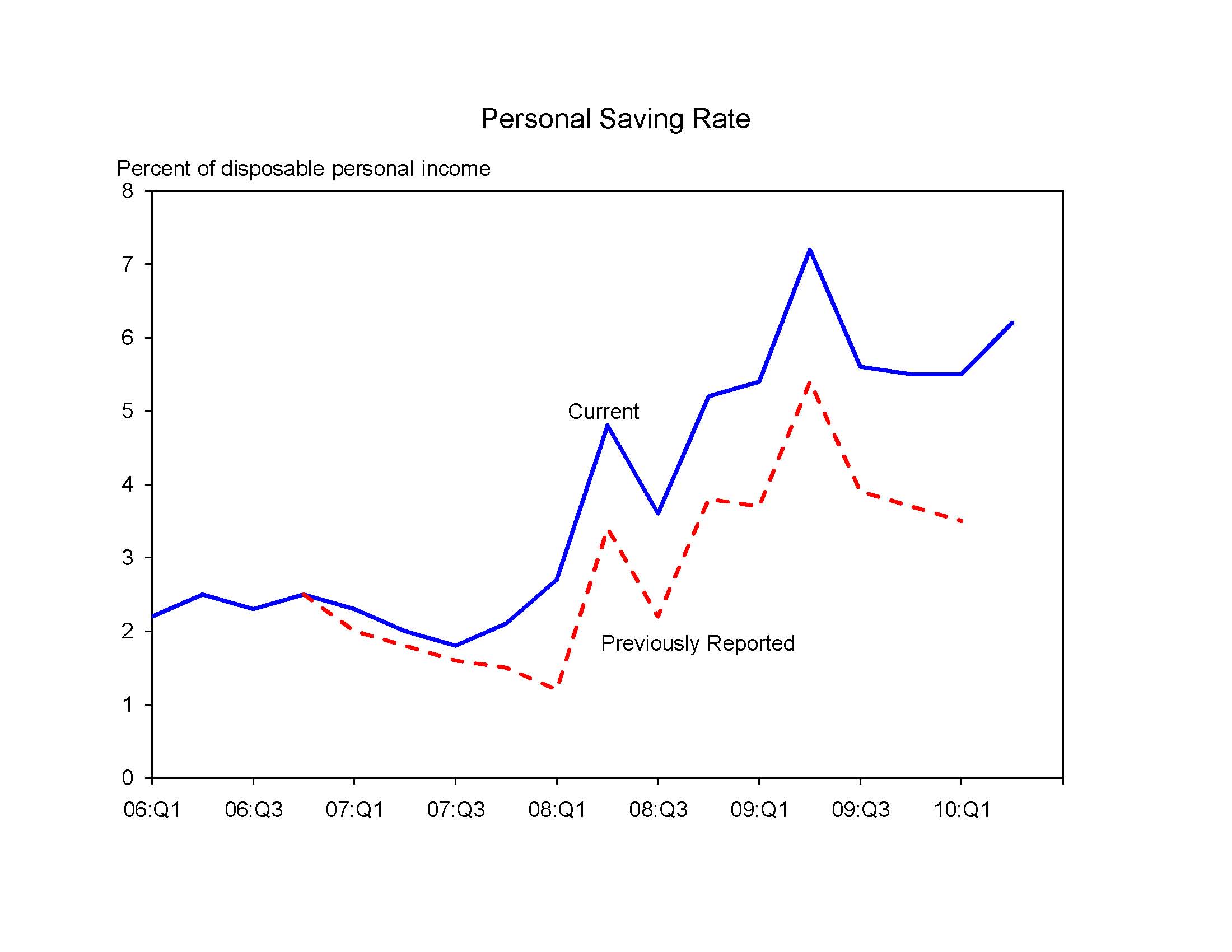