President Obama on the End of Combat Operations in Iraq & Our Troops: "While Our Country Has Sometimes Been Divided, They Have Fought Together as One"

August 2, 2010 at 2:06 PM ET by Jesse Lee
Twitter Facebook Email
Summary:
As combat operations in Iraq draw to a close, the President salutes those who have served there in a major speech to the convention of Disabled American Veterans.

This morning the President discussed the great honor he felt to be speaking at the national convention of Disabled American Veterans in Atlanta, Georgia -- one of the great organizations carrying on the values of America's proud military.  The occasion was all the more meaningful because yet another momentous turning point in that history is upon us:

Today, your legacy of service is carried on by a new generation of Americans.  Some stepped forward in a time of peace, not foreseeing years of combat.  Others stepped forward in this time of war, knowing they could be sent into harm’s way.  For the past nine years, in Afghanistan and Iraq, they have borne the burdens of war.  They, and their families, have faced the greatest test in the history of our all-volunteer force, serving tour after tour, year after year.  Through their extraordinary service, they have written their own chapter in the American story.  And by any measure, they have earned their place among the greatest of generations.

Now, one of those chapters is nearing an end.  As a candidate for President, I pledged to bring the war in Iraq to a responsible end.  (Applause.)  Shortly after taking office, I announced our new strategy for Iraq and for a transition to full Iraqi responsibility.  And I made it clear that by August 31st, 2010, America’s combat mission in Iraq would end.  (Applause.)  And that is exactly what we are doing -- as promised and on schedule.  (Applause.)

Already, we have closed or turned over to Iraq hundreds of bases.  We’re moving out millions of pieces of equipment in one of the largest logistics operations that we’ve seen in decades.  By the end of this month, we’ll have brought more than 90,000 of our troops home from Iraq since I took office -- more than 90,000 have come home.  (Applause.)

The White House has released a fact sheet detailing just how extensive this drawdown has been, and what it will mean for our broader security.  It brings toward a close a war that was at the center of passionate debate in America for much of the last decade, including the last election.  But as the President pointed out, support for our troops was -- and will continue to be -- a great unifying force:

These men and women from across our country have done more than meet the challenges of this young century. Through their extraordinary courage and confidence and commitment, these troops and veterans have proven themselves as a new generation of American leaders.  And while our country has sometimes been divided, they have fought together as one.  While other individuals and institutions have shirked responsibility, they have welcomed responsibility.  While it was easy to be daunted by overwhelming challenges, the generation that has served in Iraq has overcome every test before them.

And just as Vice President Biden made clear last week, the President spoke to the fact that while we should all salute those who have served -- and who will continue to serve -- our government owes it to them to keep our country's commitment in deeds as well as words.  At the very beginning of his remarks, he recounted a visit from DAV's Commander Roberto Barrera:

Now, there’s another visit I won’t forget.  I was in the Oval Office expecting a visit from the DAV.  And in comes Bobby carrying a baseball bat.  (Laughter.)  Now, it’s not every day that somebody gets past the Secret Service carrying a baseball bat.  (Laughter.)  You may have heard about this.  It turns out it was a genuine Louisville Slugger -- (applause) -- a thank you for going to bat for our veterans on advanced appropriations. 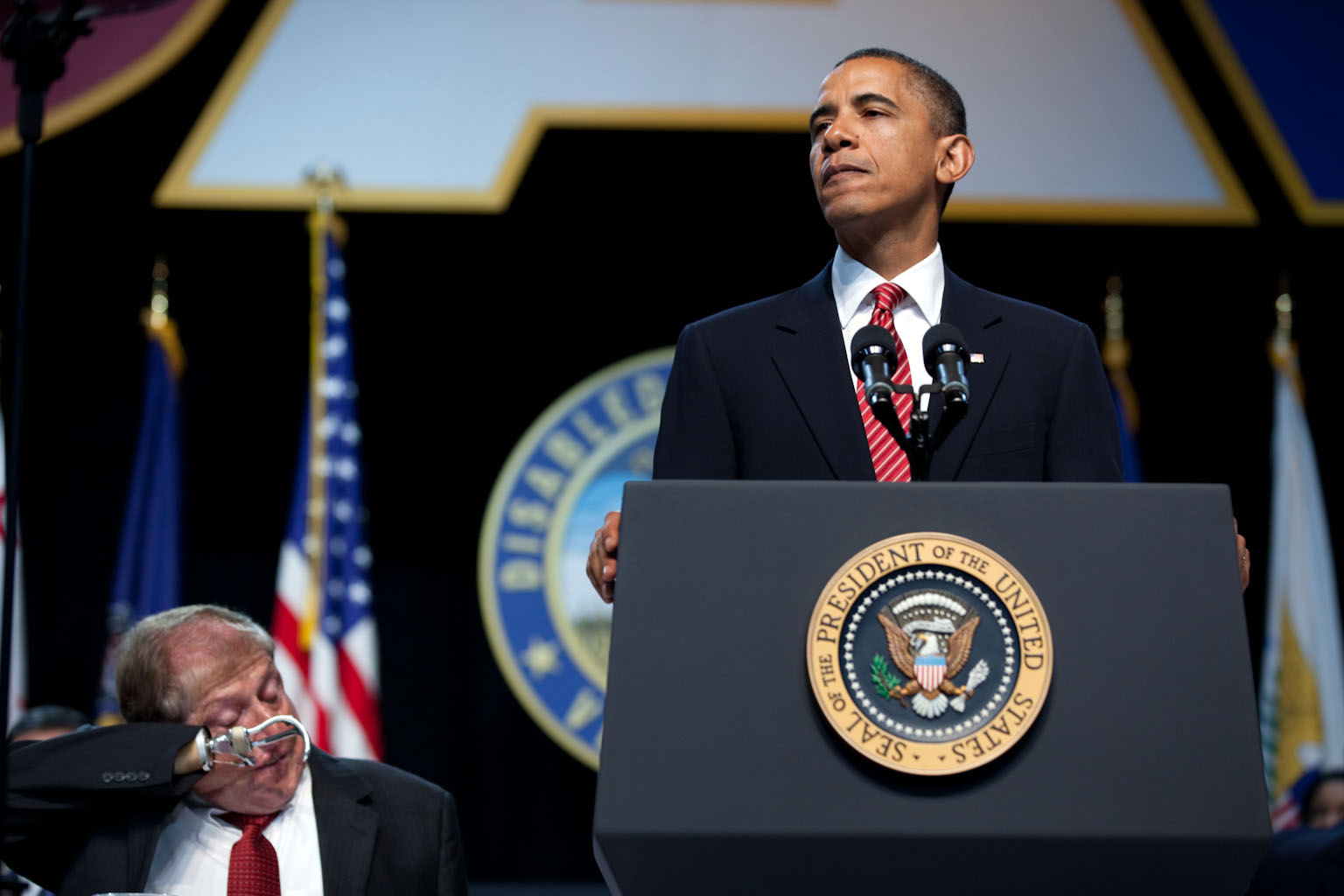 Later in his speech, the President began to recount some of the accomplishments that earned that Slugger, along with the accomplishments that came afterwards.  That includes the largest percentage increases to the VA budget in the past 30 years; help for about about 200,000 Vietnam vets who may have been exposed to Agent Orange, as well as help for Gulf War vets with specific infectious diseases; eliminating co-pays for catastrophically disabled veterans; increased funding for veterans' health care across the board; eliminating delays both in the funding for medical care and the claims process; pooling the wisdom of VA employees to help cut through red tape; and an ongoing fight to end homelessness amongst veterans, which has already seen significant progress.  His success so far eliminating the claims backlog, and his promise to stop it from returning with new claims processors and streamlined technlogy, was met with a "Hallelujah!"

He then spoke particularly to the concerns facing veterans coming out of the service today:

Finally, we’re keeping faith with our newest veterans returning from Afghanistan and Iraq.  We’re offering more of the support and counseling they need to transition back to civilian life.  That includes funding the post-9/11 GI Bill, which is already helping more than 300,000 veterans and family members pursue their dream of a college education.  (Applause.)

And for veterans trying to find work in a very tough economy, we’re helping with job training and placement.  And I’ve directed the federal government to make it a priority to hire more veterans, including disabled veterans.  (Applause.)  And every business in America needs to know our vets have the training, they’ve got the skills, they have the dedication -- they are ready to work.  And our country is stronger when we tap the incredible talents of our veterans.  (Applause.)

For those coming home injured, we’re continuing to direct unprecedented support to our wounded warriors in uniform -- more treatment centers, more case managers -- delivering the absolute best care available.  For those who can, we want to help them get back to where they want to be -- with their units.  And that includes service members with a disability, who still have so much to offer our military.

We’re directing unprecedented resources to treating the signature wounds of today’s wars -- traumatic brain injury and Post Traumatic Stress Disorder.  (Applause.)  And I recently signed into law the Caregivers and Veterans Omnibus Health Services Act.  That’s a long name, but let me tell you what it does.  It not only improves treatment for traumatic brain injury and PTSD, it gives new support to many of the caregivers who put their own lives on hold to care for their loved one.  (Applause.)

And as so many of you know, PTSD is a pain like no other -- the nightmares that keep coming back, the rage that strikes suddenly, the hopelessness that’s led too many of our troops and veterans to take their own lives.  So today, I want to say in very personal terms to anyone who is struggling -- don’t suffer in silence.  It’s not a sign of weakness to reach out for support -- it’s a sign of strength.  Your country needs you.  We are here for you.  We are here to help you stand tall.  Don’t give up.  Reach out.  (Applause.)

We’re making major investments in awareness, outreach, and suicide prevention -- hiring more mental health professionals, improving care and treatment.  For those of you suffering from PTSD, we’re making it a whole lot easier to qualify for VA benefits.  From now on, if a VA doctor confirms a diagnosis of Post Traumatic Stress Disorder, that is enough -- no matter what war you served in.  (Applause.)

These are the commitments my administration has made.  These are the promises we’ve worked to keep.  This is the sacred trust we have pledged to uphold -- to you and all who serve. 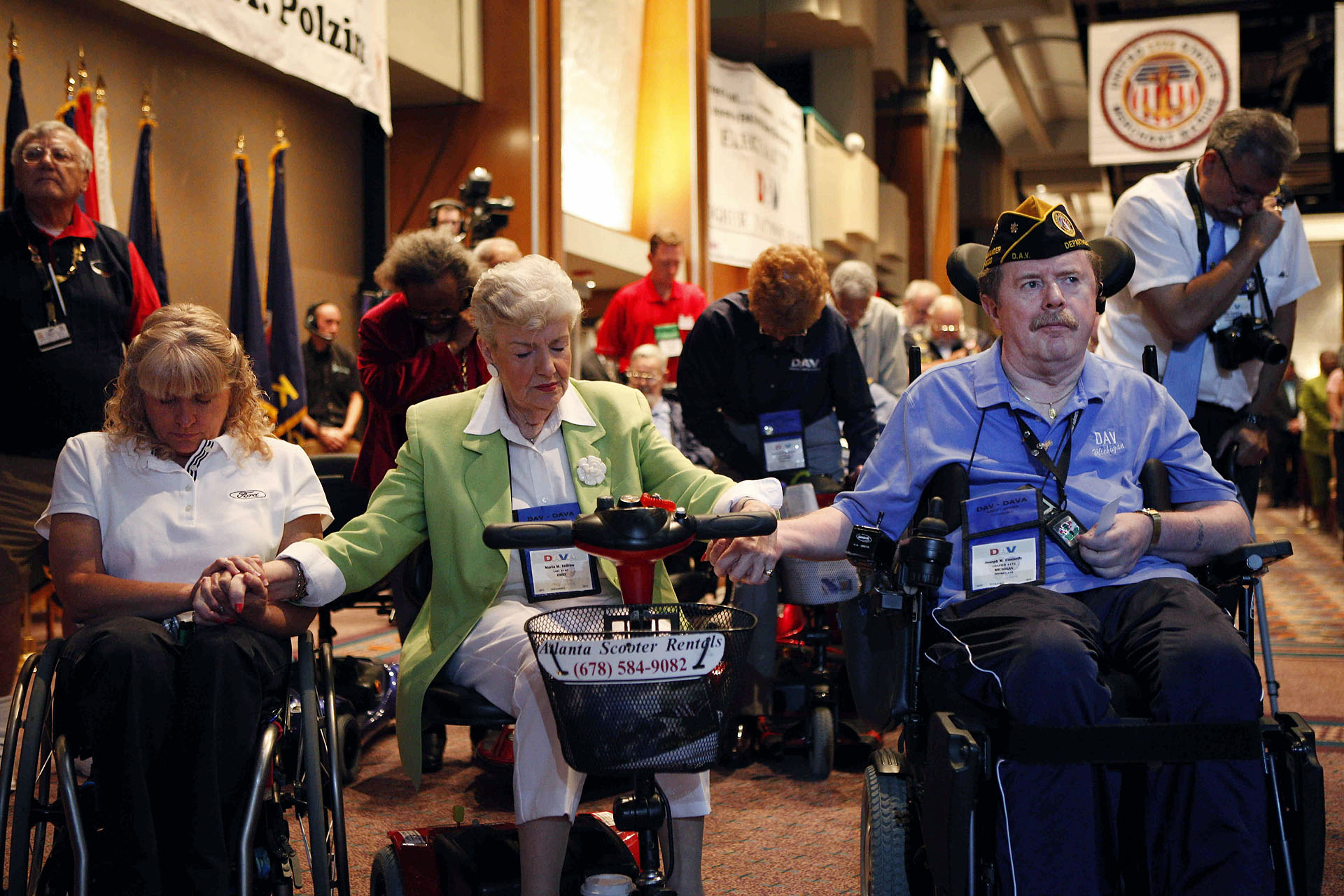 Delegates hold hands during a prayer at the Disabled American Veterans 89th National Convention in Atlanta, Ga. President Barack Obama addressed the group and spoke of the ongoing drawdown in Iraq, support for our troops in Iraq and Afghanistan and the Administration’s commitment to serve our veterans as well as they have served us, August 2, 2010. (Official White House Photo by Samantha Appleton)