Help Where It's Needed

August 4, 2010 at 11:05 AM ET by Jared Bernstein
Twitter Facebook Email
Summary:
Jared Bernstein, Chief Economic Advisor to the Vice President, debunks another misunderstanding of the Recovery Act and where the help has been going.

To get the correct answer, you’ve got to ask the right question.

An article in USA Today mistakenly concludes that Recovery Act benefits are not reaching the communities that need the help.  Now you might reasonably ask whether the 3 million or so people working because of the Recovery Act live in places where they don’t need those jobs – kind of an absurd proposition.  And it’s also the case that USA Today reaches this conclusion using some incomplete data to begin with - but the article also makes two mistakes: First, USA Today fails to separate out programs directly keyed to joblessness, and second, they conflate state unemployment with need.

Before going into the details, it’s important to reflect on this second shortcoming, because it’s a fundamental flaw in their analysis.  We put recovery projects where they’re needed, regardless of a state’s unemployment rate.  We build roads where roads are needed, we clean up superfund sites where they are located and we repair schools where schools need fixing.

To put this point in historical context, think back to the New Deal.   One of the most memorable and lasting projects from that era was the Hoover dam.  This project was built in a region where the unemployment rate was probably around zero, because it was in the middle of the uninhabited Nevada desert!  But using USA Today’s analysis, the Hoover dam would have been a mistake because it was built in an area with only “below-average” unemployment.

Delving into some details, the article claims that per capita spending is more likely to go to communities where the state unemployment rate is below the national average.   But, as we’ve argued before, if you look at the Recovery Act programs that are targeted toward reaching the unemployed—not just Unemployment Insurance, but food assistance, training services, aid to states, and more—it’s simply not true that state Recovery spending is uncorrelated with state unemployment.

The graph below plots this relationship, showing that when we look at the set of programs directly linked to joblessness (using complete, up-to-date data), the positive correlation is clear and strong. 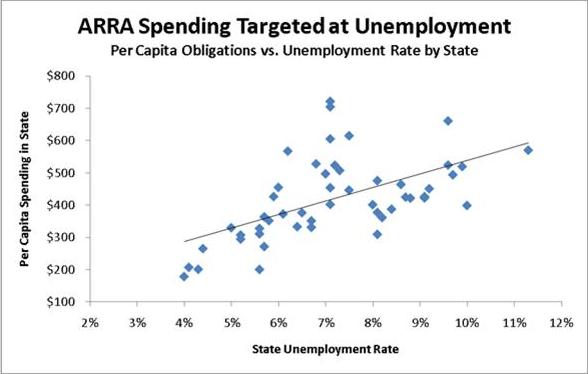 So, contrary to the thrust of the USA Today piece, much of the Recovery Act spending is higher in places with higher unemployment, and that’s no accident: it reflects the Act’s design.  But that’s not the whole story.

As noted above, the fact that the correlation between state unemployment and total ARRA spending isn’t perfect is an important and positive attribute of the Recovery Act.

And there are highly worthy projects—roads that really need fixing, water systems that need repairs, schools that need resources—in every state across America.   It’s smart economics to fix these problems where they exist, regardless of the unemployment rate.

Bottom line, where Recovery Act components are directly keyed to job market conditions, they are clearly reaching those areas (keeping in mind that some of those communities may reside within low-unemployment states).   And where there are infrastructure and investment needs—whatever the unemployment rate is—the Recovery Act is there too, helping to upgrade our schools, our highways, our airports, while planting seeds of opportunity in sectors like clean energy, high-speed rail, and the smart grid.

Most importantly, the Recovery Act is putting Americans back to work, approximately three million people so far.  And that’s not just our view.  Outside analysts from the non-partisan Congressional Budget Office to independent economists, Mark Zandi and Alan Blinder, whose recent work concludes that the Recovery Act played a key role in turning this economy around.

That’ s movement in the right direction, but it’s not fast enough.   We’ve got to do more to build on the momentum the Recovery Act helped to generate.  But along the way, let’s be sure to get the facts right about how the Recovery Act is working and who it’s reaching.