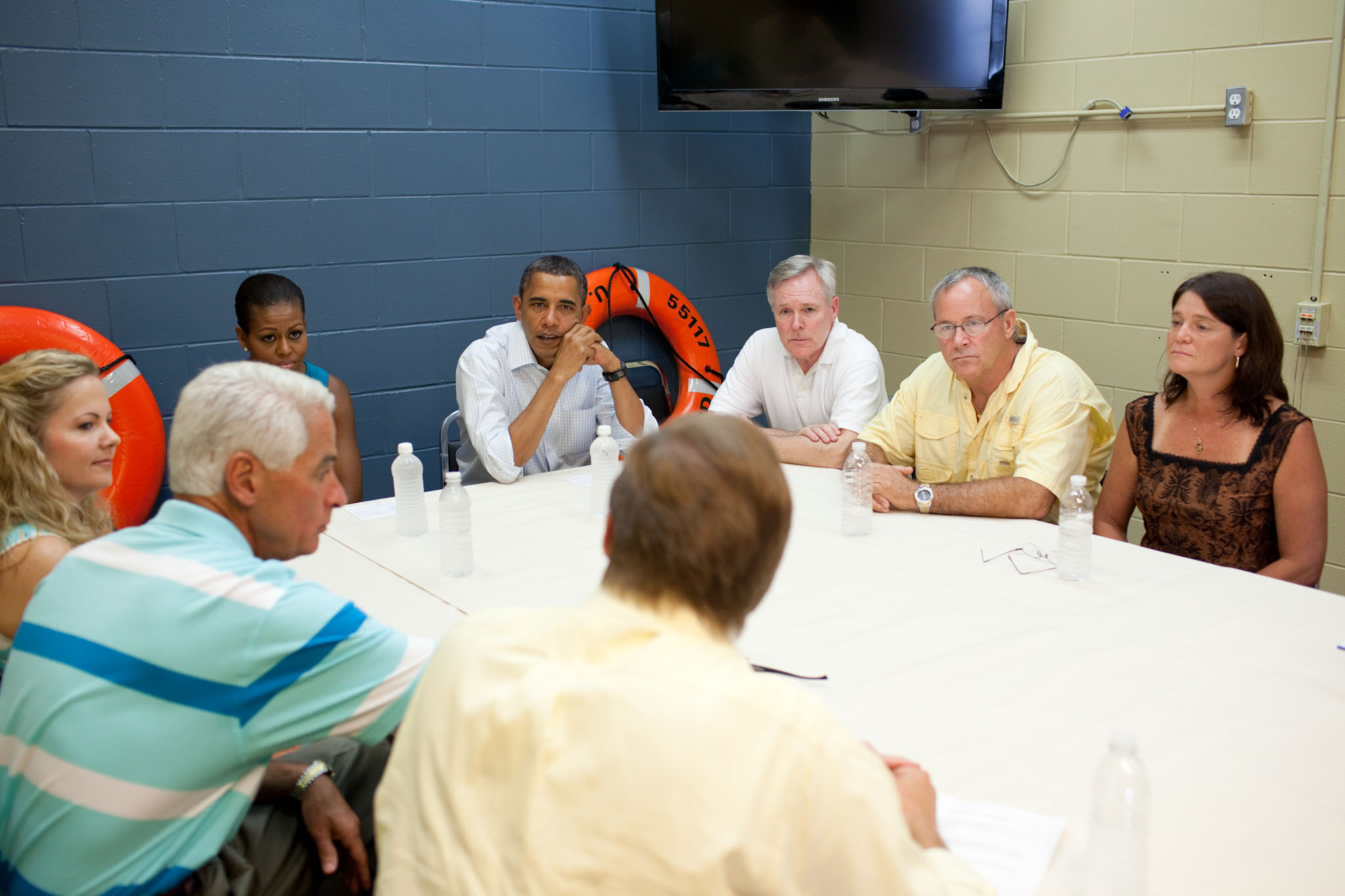 Following the roundtable discussion, the President spoke about his sustained commitment to the Gulf.  The President was clear that though the well has been capped and the oil is no longer spilling from the ocean floor, there is still work to be done:

Well, today the well is capped.  Oil is no longer flowing into the Gulf.  It has not been flowing for a month.  And I'm here to tell you that our job is not finished and we are not going anywhere until it is.  That's the message that I wanted to come here and deliver directly to the people along the Gulf Coast -- because it's the men and women of this region who have felt the burden of this disaster.  They watched with anger and dismay as their livelihoods and their way of life was threatened these past few months.  And that's why I made a commitment in my visits here that I was going to stand with you not just until the well was closed, not just until the oil was cleaned up, but until you had fully recovered from the damage that's been done.  And that is a commitment that my administration is going to keep.

Next we're going to continue testing fisheries and we'll be reopening more areas for fishing as tests show that the waters are safe.  Already, more than 26,000 square miles were reopened at the end of July, and another 5,000 were reopened earlier this week.  I know this takes some time, and it's been incredibly hard on the people who earn their living on the water.  Carolyn's boats, for example, have had to find different areas to fish that are further away and require more fuel, so she's been having to make some decisions, maybe I don't send out my boat this time out.  But their livelihoods, not to mention the health of the people across this country, obviously depends on making sure that folks can trust the seafood coming from the Gulf, trust that it's safe, as it always has been.

Finally, President Obama stressed the importance of standing together with the people of the region and encouraged Americans from across the country to come down and enjoy the Gulf:

So, with the closure of the well we mark an important milestone.  But this is not the end of the journey.  And in completing the work ahead I'm reminded of what I heard when I was in Louisiana back in June.  I spent time with folks on Grand Isle, meeting with fishermen and small business owners, and the town's mayor, David Camardelle.  And he told me what his friends and neighbors were going through.  He talked about how hard things had been.  But he also explained the way folks rallied to support one another, and said, the people in this community may not have a lot of money, but that didn’t matter.  "We help each other," he said.  "That's what we do."

That's what folks do for one another in the Gulf.  That's what the Coast Guard has been doing for folks in need.  That's what we do as Americans.  And my job is to make sure that we live up to this responsibility, that we keep up our efforts until the environment is clean, polluters are held accountable, businesses and communities are made whole, and the people of the Gulf Coast are back on their feet.

So to the men and women of the Coast Guard, thank you again for your extraordinary service.  To the people here in the Gulf, we are going to be standing by your side.  And to Americans all across the country, come on down and visit.