Today, President Obama travelled to Menomonee Falls, Wisconsin to visit the ZBB Energy Corporation’s manufacturing facility.  ZBB Energy Corporation manufactures advanced zinc bromide flow batteries and intelligent control platforms.  These are crucial components of building a smart energy grid and expanding the commercialization electric vehicles because they allow users to cut costs by shifting energy use to off-peak hours and bank intermittent sources of energy like the sun and wind for future use.

ZBB Energy Corporation is using $1.3 million in Recovery Act State Energy Program loans to fund a $4.5 million factory renovation to triple their capacity to manufacture flow batteries and power systems.  As a result, the company has already retained a dozen workers and will hire about 80 new workers over time.

In his remarks to workers at ZBB Energy Corporation, President Obama discussed the importance of supporting the manufacturing sector here at home:

So we’re investing in 21st century infrastructure – roads and bridges, faster Internet access, high-speed railroads -- projects that will lead to hundreds of thousands of private sector jobs, but will also lay the groundwork so that our kids and our grandkids can keep prospering.

We’ve cut taxes for small businesses that hire unemployed workers.  In fact, I’ve signed seven other small business tax cuts so that entrepreneurs can help expand and buy new equipment and add more employees.  We’ve taken emergency steps to prevent layoffs of hundreds of thousands of teachers and firefighters and police officers, and other critical public servants in our communities.  And I think that Governor Doyle will testify that we have made progress in part because everybody has pulled together.  There was a great danger of even greater layoffs all across this state for vital services that would affect our kids and our families.  These folks would have otherwise lost their jobs because of state and local budget cuts.

We expect our commitment to clean energy to lead to more than 800,000 jobs by 2012.  And that’s not just creating work in the short term, that’s going to help lay the foundation for lasting economic growth.  I just want everybody to understand --just a few years ago, American businesses could only make 2 percent of the world’s advanced batteries for hybrid and electric vehicles -- 2 percent.  In just a few years, we’ll have up to 40 percent of the world’s capacity.

Here at ZBB, you’re building batteries to store electricity from solar cells and wind turbines.  And you’ve been able to export batteries around the globe, and that’s helping lead this new industry.  For years, we’ve heard about manufacturing jobs disappearing overseas.  Well, companies like this are showing us how manufacturing can come back right here in the United States of America, right back here to Wisconsin.  (Applause.) 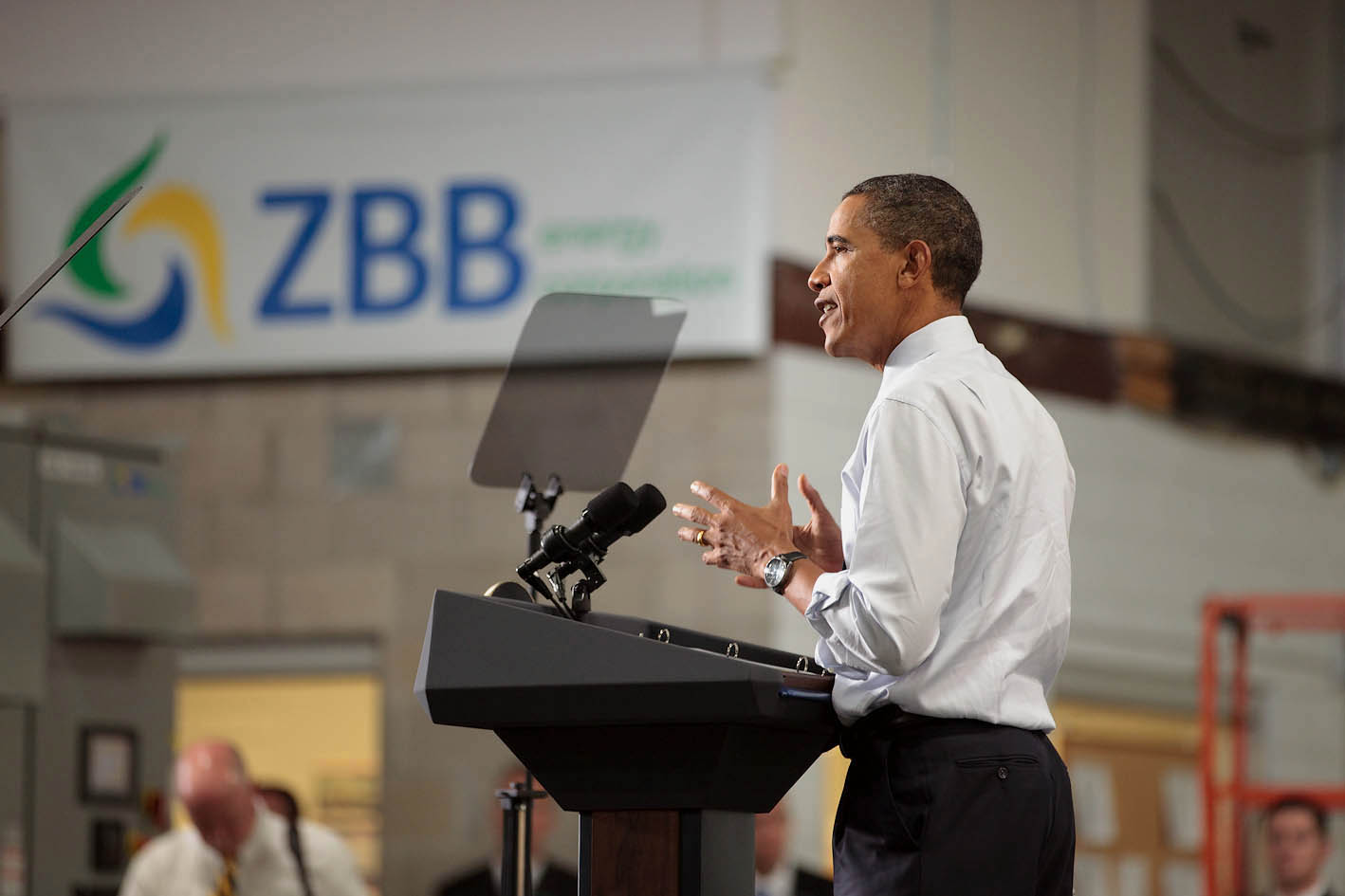 Now I’ll be honest with you, there’s going to be a big debate about where we go.  There are folks in Washington right now who think we should abandon our efforts to support clean energy.  They’ve made the political calculation that it’s better to stand on the sidelines than work as a team to help American businesses and American workers.

So they said no to the small business tax cuts I talked about.  They said no to rebuilding infrastructure.  And they said no to clean energy projects.  They even voted against getting rid of tax breaks for shipping jobs overseas so we could give those tax breaks to companies that are investing right here in Wisconsin.

And my answer to people who have playing politics the past year and a half is, they should come to this plant.  They should go to any of the dozen new battery factories, or the new electrical vehicle manufacturers, or the new wind turbine makers, or the solar plants that are popping up all over this country, and they should have to explain why they think these clean energy jobs are better off being made in Germany or China or Spain, instead of right here in the United States. 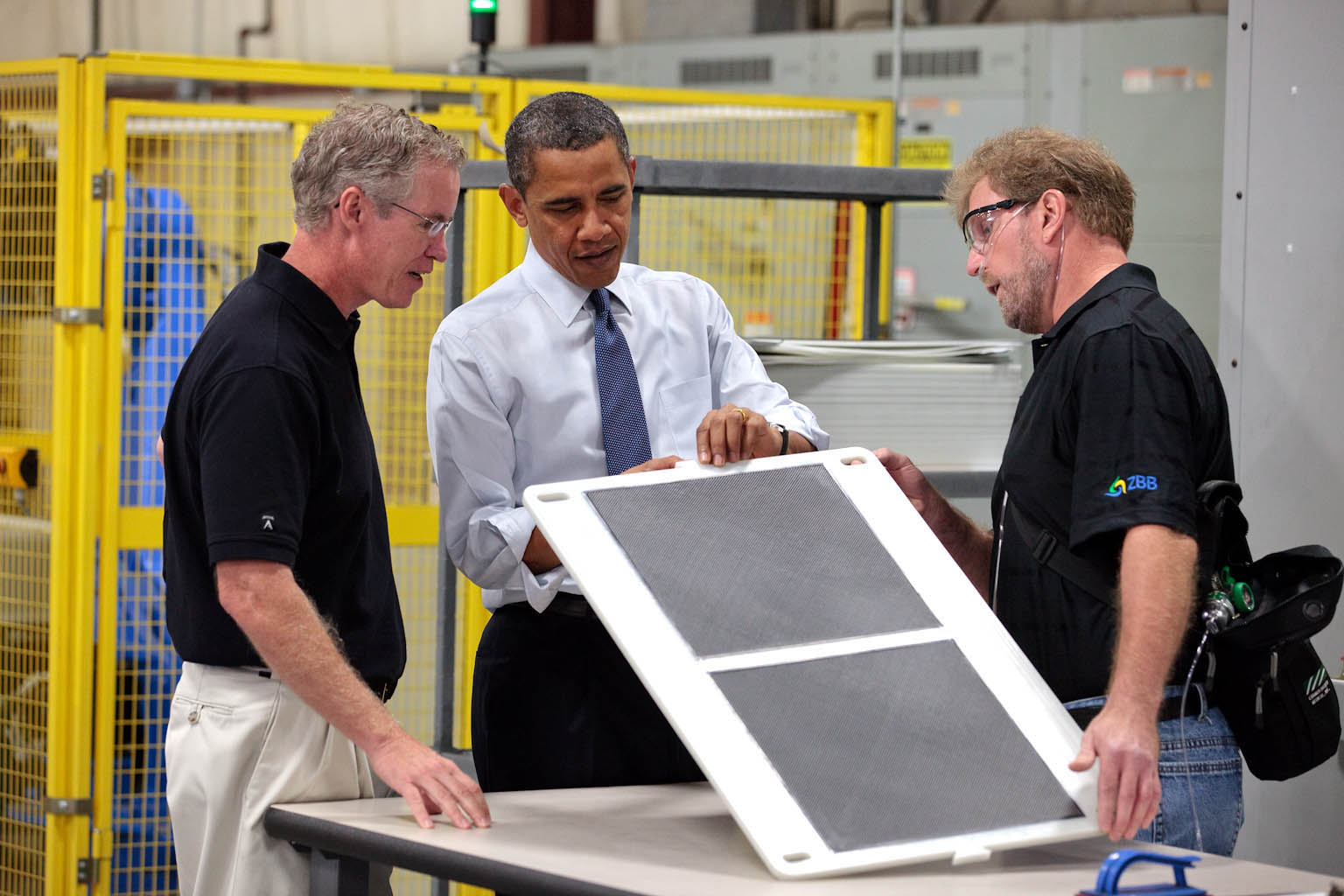