Around the Kitchen Table in Columbus, Ohio

August 18, 2010 at 5:00 PM ET by Kori Schulman
Twitter Facebook Email
Summary:
The President sits around the kitchen table with the Weithman Family in Columbus, Ohio and speaks to families from the area about the economy, an issue that's on a lot of people’s minds right now.

Today the President spent some time around the kitchen table with the Weithman Family in Columbus, Ohio. Ohio natives Rhonda and Joe Weithman live in Columbus with their two children, Rachel (9) and Josh (11). The President talked to Joe and Rhonda about the challenges that they’ve had to go through; Joe runs a small Architectural firm that saw a drop in business during the economic slowdown and Rhonda lost her job. 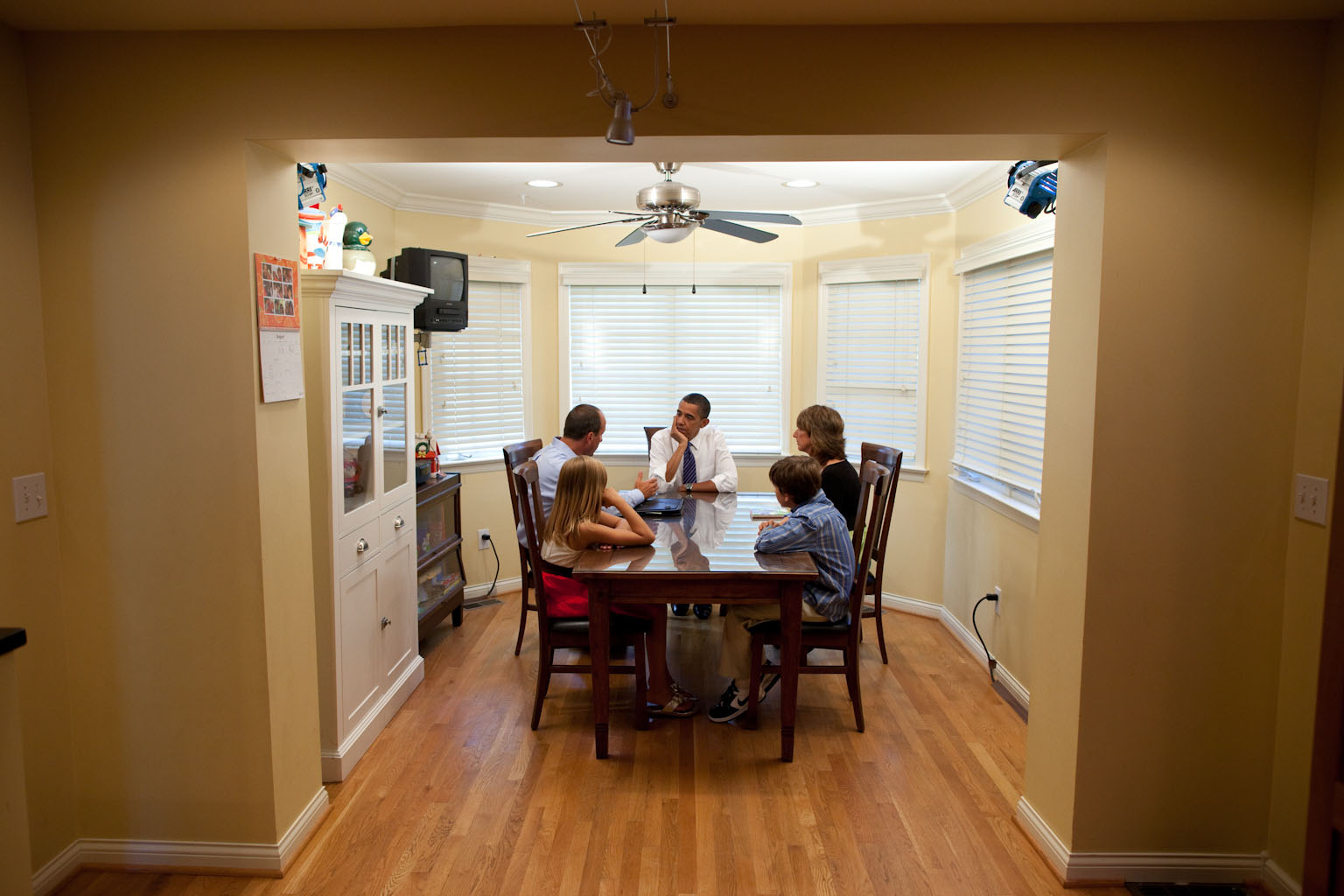 Thanks to an increase in infrastructure projects, Joe was able to keep a couple employees on staff and is hopeful that he can soon hire more employees as the economy continues to improve. Rhonda was able to keep her health insurance due to COBRA subsidies from the Recovery Act; this was vital because she not only carried insurance for the family but her son has a pre-existing condition. (Learn more about how Administration policies have helped the Weithman Family at the bottom of this post.) 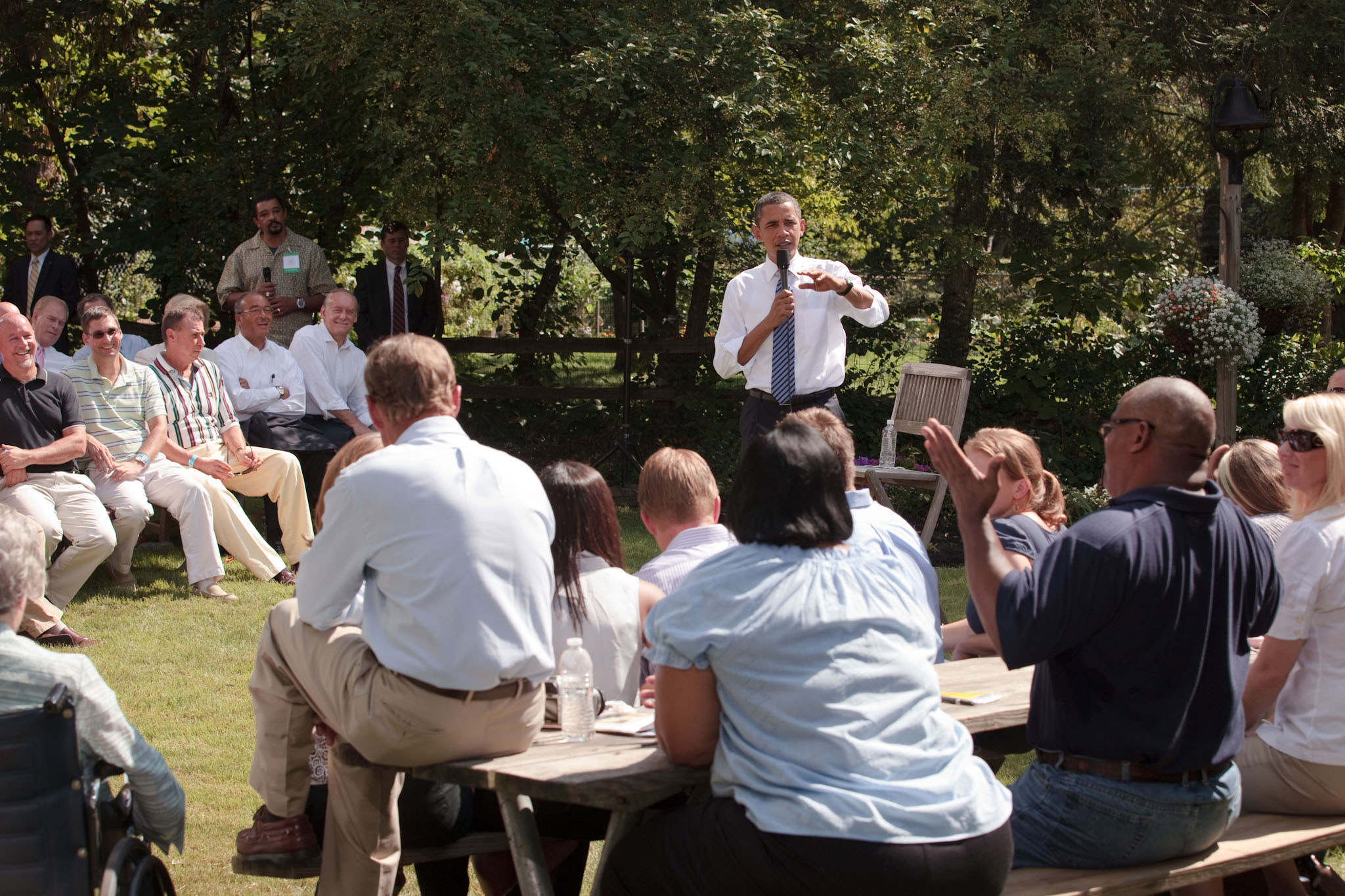 President Barack Obama talks about the economy with area families in the backyard of the Weithman family home in Columbus, Ohio. August 18, 2010. (Official White House Photo by Chuck Kennedy)

During a conversation with families from the area in the backyard, the President answered some of their questions, appreciating events like this one that keep him connected to what folks are talking about at kitchen tables around the country.

One of the ways that I stay in touch is through events like this, as well as reading letters from constituents and voters all across the country every night. And obviously what’s on a lot of people’s minds right now is the economy.

We went through the worst recession that we've had since the Great Depression. And when I was sworn in about 18 months ago, we had already lost several million jobs and we were about to lose several million more. We lost 800,000 jobs the month I was sworn in. And so we had to act fast and take some emergency steps to prevent the economy from going back into what could have been a Great Depression.

And we were successful in doing so. We stabilized the economy; we stabilized the financial system. We didn’t have a complete meltdown. And whereas we were losing jobs in the private sector when I was first sworn in, we're now gaining jobs, and we've gained jobs seven consecutive months in the private sector. The economy was shrinking about 6 percent; the economy is now growing. So we've made progress. But let’s face it, the progress hasn’t been fast enough.

The main message the President wanted to deliver, what he said to Joe and Rhonda around the kitchen table just a little while earlier, is that slowly, but surely, we are moving in the right direction:

We’re on the right track. The economy is getting stronger, but it really suffered a big trauma. And we’re not going to get all 8 million jobs that were lost back overnight. It’s going to take some time. And businesses are still trying to get more confident out there before they start hiring. And people -- consumers -- are not going to start spending until they feel a little more confident that the economy is getting stronger.

And so what we’re trying to do is create sort of a virtuous cycle where people start feeling better and better about the economy. And a lot of it is sort of like recovering from an illness; you get a little bit stronger each day and you take a few more steps each day. And that’s where our economy is at right now.

What we can’t afford to do is to start going backwards and doing some of the same things that got us into trouble in the first place. This is why it’s been so important for us, for example, to pass something like Wall Street reform to make sure that we’re not creating the same kinds of financial bubbles and the massive leverage and the reckless risks that helped to create this problem in the first place.

We can’t go back to doing things the way we were doing them before. We’ve got to go forward. That’s what we’re trying to do. And hopefully as we continue over the next several months and the next several years, we’re going to see a Columbus and an Ohio and a United States of America that is going to be stronger than it was before this crisis struck. I am absolutely confident of that. But we’ve got more work to do.

Here's how Administration Policies have helped the Weithman Family:

COBRA Subsidies from the Recovery Act: The Recovery Act established a 65 percent tax credit subsidy for COBRA health insurance benefits for involuntary unemployed workers. Rhonda benefited from these subsidies after she was laid off from her job. This tied her over until she went to work for her husband and was covered under his plan.

Investments in Local Infrastructure: Joe runs an architecture firm with five employees. He was able to keep two of their employees that otherwise would have been laid off due to work on a police station renovation that received infrastructure funding. Joe is hopeful that he will hire an additional employee as the economy continues to improve and additional projects, some of which could be funded by the Recovery Act, are secured.