When it comes to the auto companies, we often focus more on the lake than the streams and rivers.

That is, much of the attention to how this critical sector is faring focuses on the end-of-the-line assembly plants, and less on the suppliers that provide the parts to be assembled.

You might think that’s because in employment terms, the end-of-the-line is most important.  But in fact, for every worker in the assembly plant, there are three workers in the supply chain.

So if you want to assess the health of the auto industry, you’ve got to look beyond the factories that build the cars and trucks and examine how the suppliers are doing.

With that in mind, Vice President Biden traveled to Toledo, Ohio, today to hold a Middle Class Task Force event at the Chrysler Toledo Assembly Complex.  This state-of-the-art complex houses the main assembly plant producing the Jeep Wrangler, surrounded by three of the plant’s suppliers.

It’s one impressive complex and a great example of how the industry in general, and Chrysler in particular, is emerging from its dark days leaner, stronger, and with new-found efficiencies.  In fact, this facility twice received the Harbour Award as the most efficient assembly plant in North America.

They achieve these efficiencies by locating their major suppliers right next door, providing direct and uninterrupted flows from their assembly lines right into the plant. Such intimate flow control means much less down time—simply put, workers at the Wrangler plant don’t spend time waiting for parts.

The Vice President’s remarks emphasized these and other aspects of the supply chain.  To help make the point, he displayed this visual, showing the suppliers which provide parts directly to the Wrangler assembly plant. These top-tier suppliers alone represent 3,000 American jobs.  Other suppliers, one link down the chain, create additional jobs across the country supplying parts to the top-tier folks. 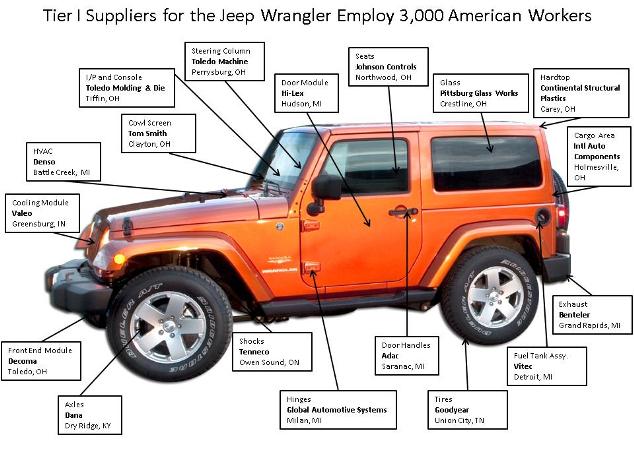 So when a plant like the one we visited runs two shifts, as is currently the case, that doesn’t just mean jobs in Toledo.  It means jobs all along the supply chain, in places like Grand Rapids, Michigan; Dry Ridge, Kentucky; Greensburg, Indiana; and other communities all over the country.

As I watched the Vice President meet with workers at this great manufacturing plant in the heart of the heartland, I couldn’t help but flash back to the early days of our auto task force.  Back then, it was by no means certain that these men and women would be able to keep their jobs making cars.

But even while some in government and from the pundit class urged the President and Vice President walk away from this industry, they wouldn’t turn their backs.  Instead, they bet on the American worker, on the uniquely American spirit of renewal, and on the faith that the key stakeholders would do what was needed to once again make this industry a global contender.

And that bet is paying off.

In the year before we took office, the auto industry shed 431,300 jobs. But in the 13 months since GM and Chrysler emerged from bankruptcy, auto industry employment has increased by 76,300, a huge reversal—one we’d never have seen had we listened to those urging us to walk away.

Of those 76,300 new jobs, close to 40,000 come from the suppliers. That’s the fastest year over year growth that they’ve seen in a decade.

It’s a story of hard work and sacrifice by the companies, the workers, the unions, investors, and others over the last year.  It’s a story of a bold new President and Vice President standing by a core American industry in its time of need, carefully structuring a temporary intervention designed to get them back of their feet.
And it’s a story that is by no means over.  The industry, much like the overall economy, is moving solidly in the right direction, but it’s still got a ways to go.

Vice President Biden and the Middle Class Task Force were happy to be a part of the story today, and we’ll continue to watch it and tell you about it as it evolves.