Vice President Biden on Iraq and Our Veterans: "These Homecomings Are Something I Have Long Looked Forward To..."

August 24, 2010 at 1:22 PM ET by Jesse Lee
Twitter Facebook Email
Summary:
The Vice President speaks to the Veterans of Foreign Wars as combat operations there draw to a close.
[[nid:19772]]

Having made 13 visits to Iraq and held steady conversation with Iraqi leaders over the past two years, the Vice President was as well qualified as just about anybody to speak to the Veterans of Foreign Wars as combat operations there draw to a close.  But there is also another reason this time is so meaningful to him:

These homecomings are something I have long looked forward to, and I know many of you have as well. The day my son Beau returned from a yearlong tour in Iraq, and I watched him embrace his wife and children, was one of the proudest and happiest moments of my life. By the end of next year—2011—our remaining troops in Iraq will have come home to their families and a grateful nation. This is only possible because of the extraordinary progress our military—the finest fighting force this planet has ever seen—has brought about, led by the great General Ray Odierno.

"President Obama laid out our plan for ending the war in Iraq responsibly, and we have followed that plan very closely," said the Vice President. "As a result, one week from tomorrow, U.S. combat forces will phase out their combat mission.... More than 140,000 troops in Iraq on Inauguration Day -- by the end of August, 50,000 remain. Our last remaining  -- applaud them, they deserve it -- our last remaining combat unit, one that I know personally well from visiting them in Fort Lewis, to be there as they mourned their dead, to being with them and in their vehicles in Iraq.  The 4th Stryker Brigade of the Army’s Second Infantry Division, that last unit across the border out of Iraq."

Of the countless accomplishments our troops leave behind, the Vice President noted three in particular: the defeat of Al Qaeda in Iraq and other terrorist organizations' in their goals to ruin Iraq's future; the standing up of a viable Iraqi security force that can protect that future; and the developing governing and electoral system that will shape it.  He cautioned that it might not always be pretty, but neither have other democracies over the years: "Another way of putting this is that politics has broken out."

The Vice President went on to discuss the ongoing mission in Afghanistan, one that is finally receiving the attention it demands, in no small part allowed by the drawdown in Iraq.  He discussed the new leadership of General Petraeus which is coupled with the new resources dedicated by the President and the extraordinary efforts of our troops.  He spoke too on the plan for the future of that war:

As General Petraeus has said, we will assess the progress in December and begin a responsible conditions-based transition to Afghan security leadership, on a province-by-province basis, in July of 2011. 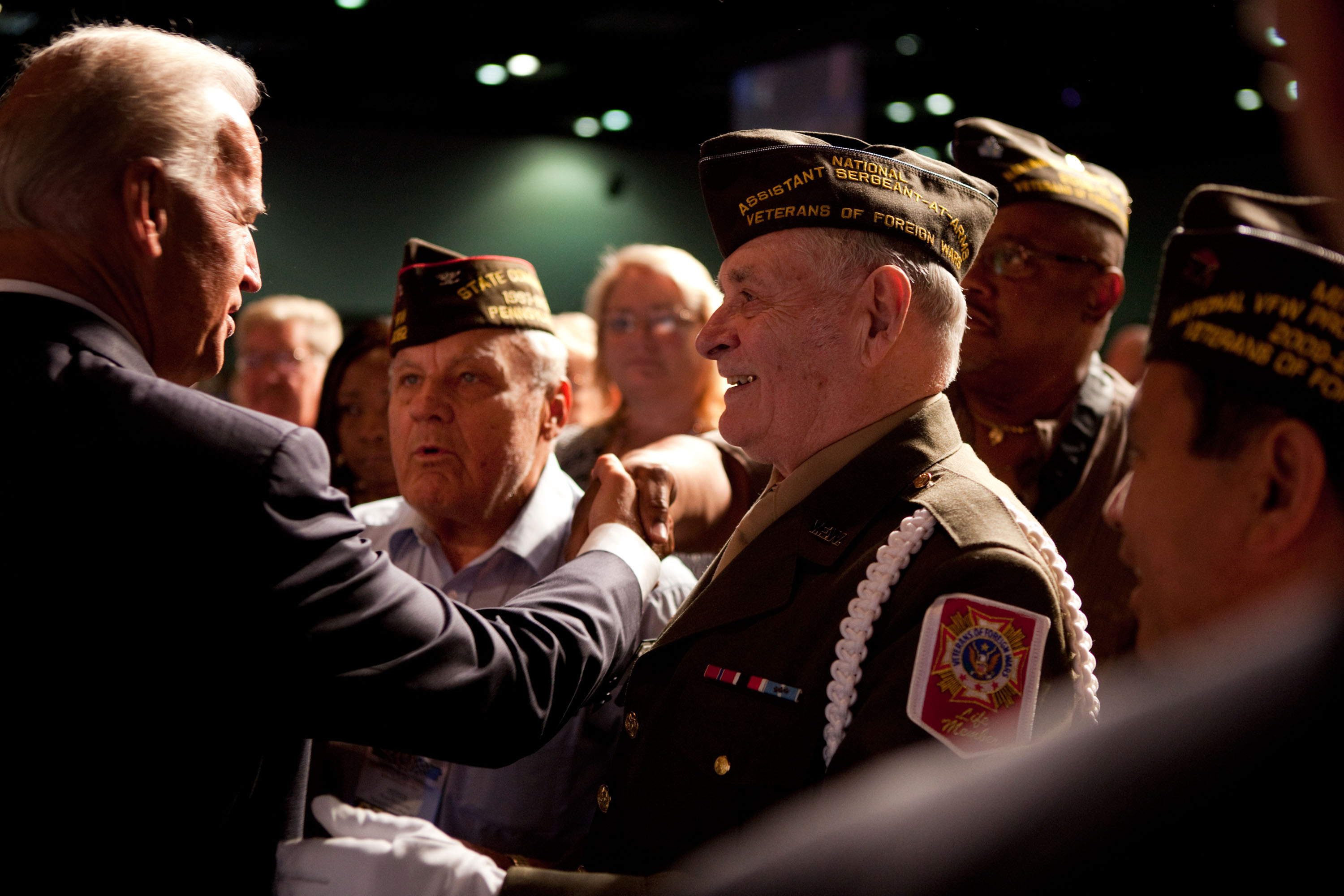 As heartfelt as all of the Vice President's remarks were, it has been a firm commitment of this Administration since Day 1 that honoring our troops and veterans is not simply a matter of words, but of action:

In the meantime, our thoughts and prayers remain with those troops still serving in harm’s way, and we will continue to give them the resources they need to succeed. But, as you know better than anyone, providing for our service members overseas is only where our responsibility to them begins, not where it ends.

The list of Administration accomplishments and initiatives geared at helping our veterans is long, but the Vice President focused on just a few: funding increases to modernize the VA for the 21st Century and helping guarantee veterans appropriations don't get held hostage to politics; the post-9/11 G.I. Bill helping nearly 300,000 veterans and their families earn college degrees; and making life and care easier for those suffering with PTSD.  "And since sometimes the best care comes from family members," he added, "we passed the Caregivers and Veterans Omnibus Health Services Act to fund and train relatives who serve as caregivers for wounded warriors."

He closed his speech with a special nod to a few of the stories he came across in focusing on Iraq over the years:

Heroes like Lt. Col. Chris Kolenda, who I met in a FOB, Foreign Operating Base in a remote God-forsaken piece of the Kunar Valley I don't know how many thousand feet above sea level, just a few miles away from the Pakistan border. With the heart of a warrior and the precision of a cultural anthropologist, he and his soldiers talked me through the myriad tribes and sub-tribes that inhabited the terrain, and the near-constant enemy fire they endured at night sitting on that exposed mountaintop....

Or heroes like the seven service members who last week were awarded the Silver Star for valorous acts more awe-inspiring than any Hollywood movie could conjure up.

One of them, Sergeant First Class David Nunez, was traveling through the Afghan village of Shewan on May 29, 2008, when insurgents attacked. His body became totally engulfed in flames as he sought to save his comrades’ lives by ridding a damaged vehicle he was in of ammunition and explosives, as he tried rapidly to get it out of the back of the vehicle they were trapped in.  He gave his life.

These stories are chapters in the greatest epic of our age. They will inspire future warriors as surely as did those in this room who fought and bled in wars gone by. But our enemies should take a different message from this sacrifice -- they should take a message that it's irrefutable proof of our resolve in the face of the new threats we now confront.

As President Obama said: “Our spirit is strong and cannot be broken; you cannot outlast us, and we will defeat you.”

Watch a video on the Vice President's visit along with Dr. Jill Biden to Fort Drum.