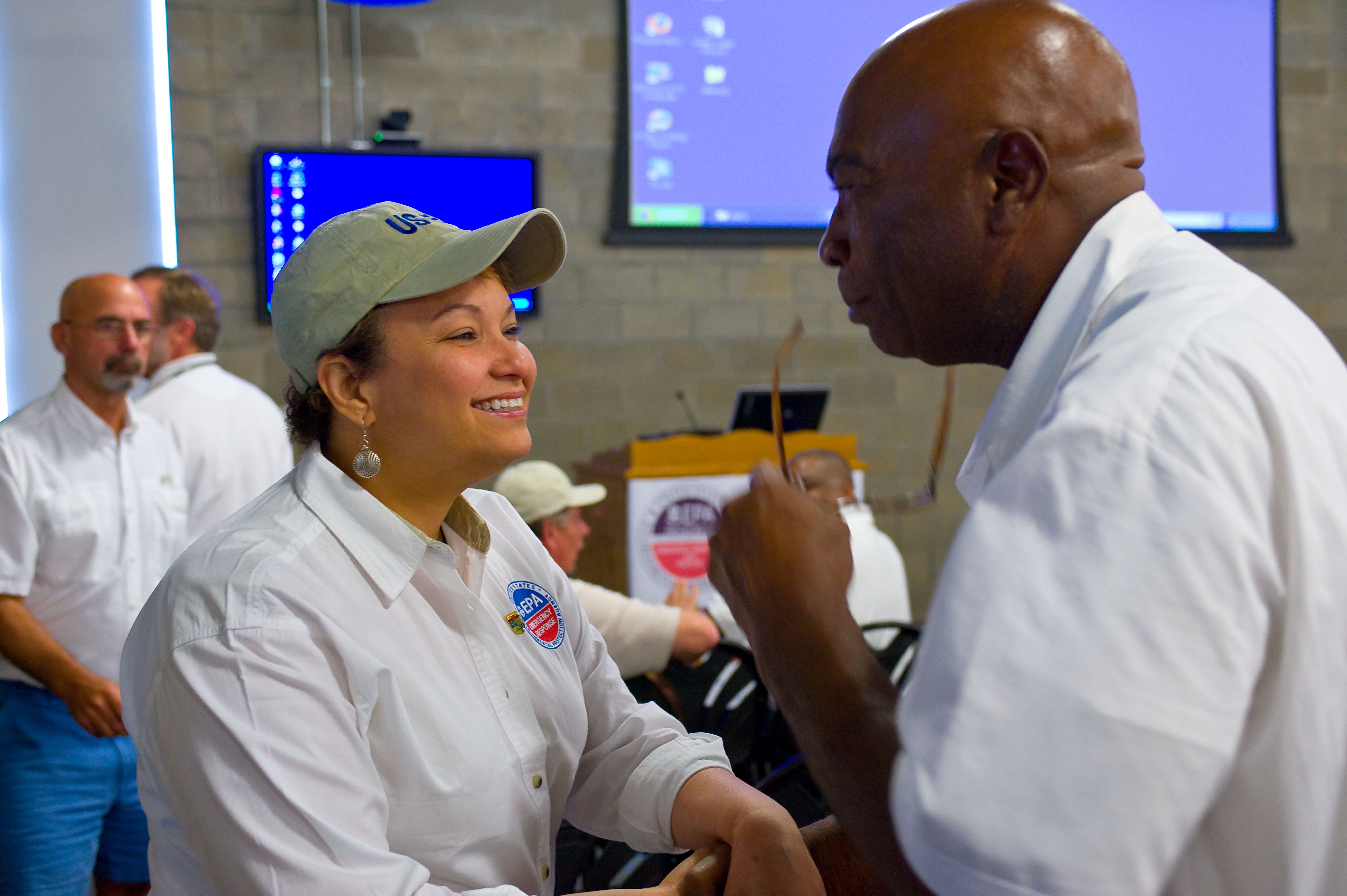 Administrator Jackson speaks with a response worker at the Incident Command Post in Alabama. June 3, 2010. (by USEPA photo by Eric Vance)

I grew up in New Orleans.  As a chemical engineering student at Tulane University, I worked and studied in the local environment, particularly the wetlands, marshes and swamps.  I saw then that the wetlands were the beating heart of the region.  The coastal waters support a multi-billion-dollar fishing industry that is a way of life for many families and communities.  The rich sediment and marsh grasses help filter pollution and provide the home for a priceless and delicate ecosystem.  And the abundant vegetation growing above the surface helps buffer storm surges during hurricanes – a vital function whose importance was all too apparent after Hurricane Katrina.

My mother was still living in New Orleans when Katrina struck.  I happened to be visiting her at the time, and drove her to safety.  But her house – the house where I grew up – was destroyed by the flooding. After the storm, she and many other Gulf residents learned that the flooding had been made worse because the marshes and wetlands had been destabilized by navigation channels, covered over by levee construction, and most damagingly, cut away for the placement of oil and gas lines.

Today my mother can make as compelling an argument for wetlands protection as any wetlands expert I’ve ever met – and in my line of work, I’ve met quite a few. She can tell you that every year almost 40 miles of wetlands outside New Orleans disappear.  We’re losing them at the rate of an entire football field every 30 minutes.  She can also tell you about the people hit hardest by this environmental degradation. Not just the people whose homes were flooded in the storms, but the local tribes and families whose lands are disappearing.  They are finding it harder and harder to fish, trap, or catch the shrimp and shellfish that make up a major part of the local economy, and many of them are moving away.

In the years since Katrina, the EPA has made it a priority to better protect our nation’s vulnerable wetlands and coastal communities. Through grant programs we’ve helped to strengthen state and tribal restoration efforts and built partnerships between government, local groups and landowners.  From restoring the Gulf’s New Cut Barrier Island and protecting Lake Borgne’s shoreline to creating the Bayou DuPont and Whiskey Island Back Barrier marshes, we’ve helped by investing more than $95 million in restoring and protecting the Gulf’s shores and wetlands.

While a clear priority for the EPA, this issue has also become a top priority for President Obama. In March, the administration released a roadmap for restoring the Gulf – outlining our work to build a better, more sustainable future for the region.  Unfortunately, shortly after the release of the plan, yet another tragedy struck: the Deepwater BP oil spill.

Having learned valuable lessons from the aftermath of Hurricane Katrina, we stepped up to defend the coastal communities and the wetlands that shield them from storms and oil alike.  We mobilized in every way possible, from extensive skimming, booming and burning efforts, to dispersing the oil and speeding its degradation offshore, before it affected fragile wetlands.

Five years after Hurricane Katrina, this administration remains committed to ensuring the vitality of the Gulf Coast, the prosperity of its economy, and the health of its residents.  Our work continues today, and will carry on until the area is back on the path to prosperity.  One of the valuable lessons we’ve learned is that building safe, healthy communities means re-building and revitalizing the wetlands that are at the heart of the Gulf Coast.

Lisa P. Jackson is the Administrator of the Environmental Protection Agency