On the Road to Recovery – Manchester, New Hampshire

Yesterday the Vice President traveled to Manchester, New Hampshire to mark the weatherization of 200,000 homes under the Recovery Act.  Across the country, thousands of construction workers are on the job making homes and office buildings more energy efficient.  This is done in simple ways like adding insulation, replacing windows and doors, and sealing up cracks in your home where air can leak out. This program reduces energy consumption, saves homeowners money, and creates jobs.

The Vice President made the announcement in the backyard of Lynn Dumont, a local Manchester resident who is in the process of having her home weatherized. Lynn’s story provides a great opportunity to see what this program is all about. 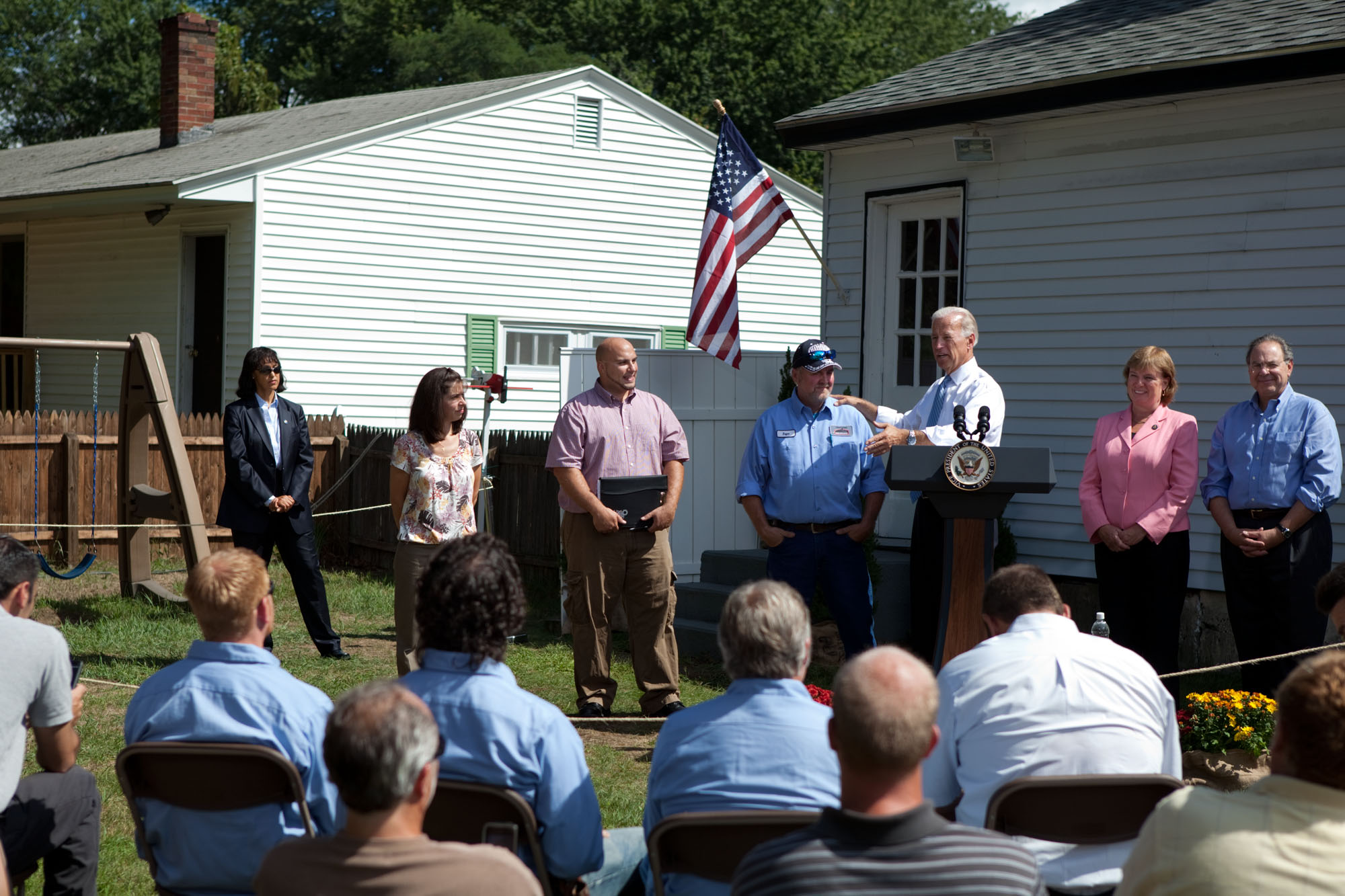 Vice President Joe Biden speaks in Lynn Dumont's back yard about the American Recovery and Reinvestment Act's weatherization program, in Manchester, New Hampshire. The Vice President was announcing that 200,000 homes have been weatherized under the program. August 26, 2010. (Official White House Photo by David Lienemann)

Southern New Hampshire Services, the Community Action Agency handling the weatherization, first did an energy audit of Lynn’s home – looking for the causes for high energy bills and identifying the most cost-effective solutions.

For Lynn, South New Hampshire Services is making some simple upgrades, including replacing a door to reduce drafts, insulating the attic to help keep in heating and cooling, and wrapping the pipes and water heater in the basement to help reduce heat loss. 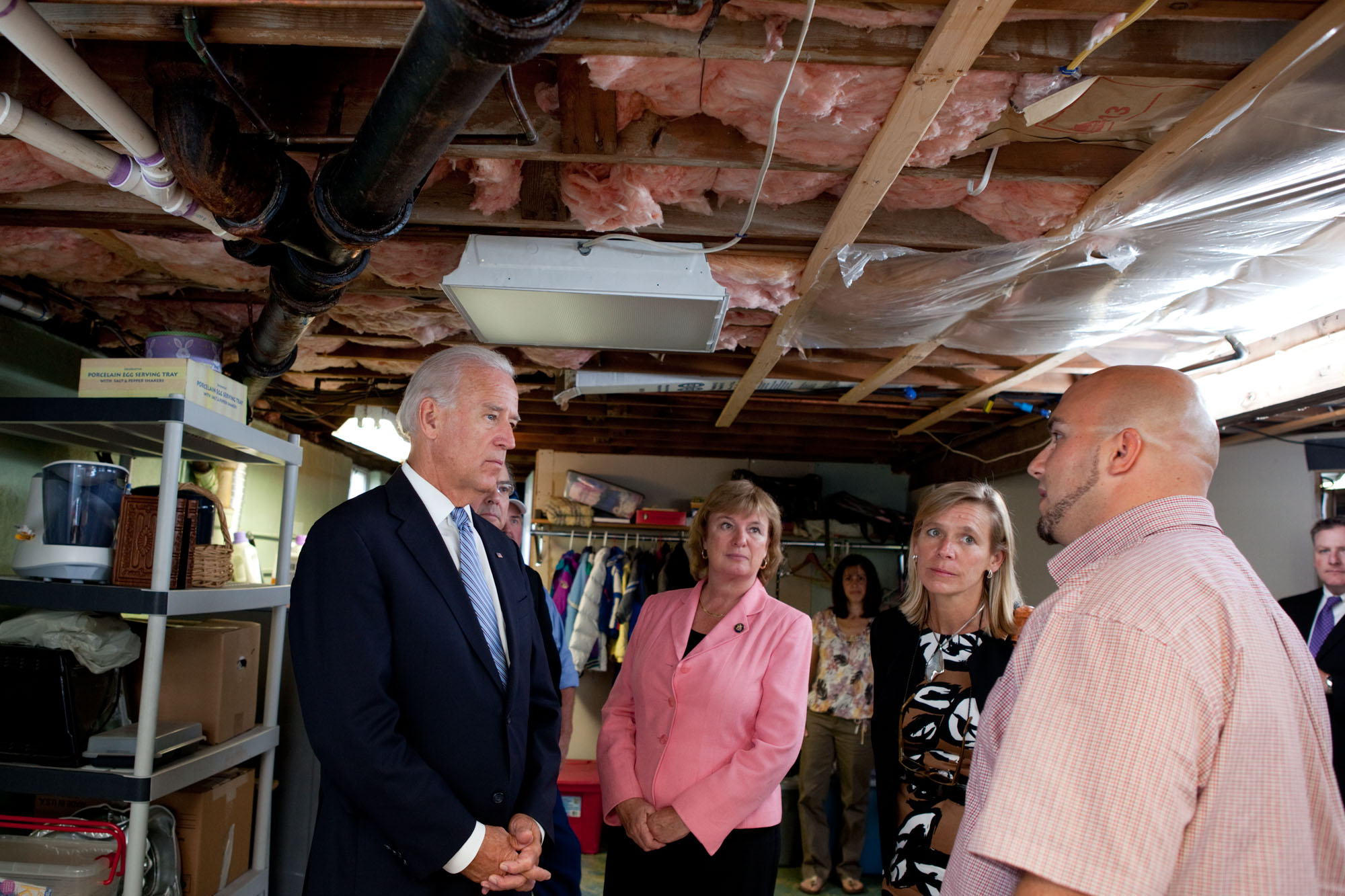 Vice President Joe Biden tours Lynn Dumont's basement and views some of the work being done on her home as part of the American Recovery and Reinvestment Act's weatherization program, in Manchester, New Hampshire. The Vice President was announcing that 200,000 homes have been weatherized under the program. August 26, 2010. (Official White House Photo by David Lienemann)

These small changes will result in an over 30 percent decrease in her energy use and $619 in annual savings on her energy bill. It will also improve the air quality for Lynn and her two small children.
Lynn’s story is not unique.  Weatherizing a home can translate into real savings for homeowners – an average of $400 a year – and for the nation.  Homes consume 22 percent of the energy we use in the U.S., yet fewer than 100,000 of them are weatherized annually. If every home in America received the same energy efficiency upgrades, homeowners could annually save more than $40 billion.

Weatherization also means jobs, over 13,000 for this program under the Recovery Act so far. And that does not include the jobs created by the suppliers related to this work, those who make the insulation, heating units, and windows.

As a result of the Recovery Act Weatherization Assistance Program, Southern New Hampshire Services has hired seven new full-time employees in-house, while their subcontractors have hired an additional 68 workers.

The training these new hires receive under the Weatherization Assistance Program translates well beyond the Recovery Act.

These are jobs that, in the words of the Vice President, are “good-paying jobs, green jobs, jobs that can’t be exported, jobs you can raise a family on … Nationwide weatherization efforts are laying the groundwork for a sustainable, energy-efficient industry that extends well beyond low-income families.”