The old adage goes that Presidents often wish for one-handed economists, to avoid all that “on the one hand, sir, we could be looking at X; though on the other hand, it could be Y.”

So when economic consensus forms around the outcome of a policy like the Recovery Act, it’s worth taking note. That’s why this article from USA Today, entitled (online) “Economists Agree: Stimulus Created 3 Million Jobs” is worth noting.

The piece cites various analyses from a wide variety of private sector economists as well as from the non-partisan Congressional Budget Office that all reach a similar conclusion: the Recovery Act was a key factor in preventing recession from becoming depression, and along the way, it has created or saved about three million jobs while making historic investments in clean energy, education, and upgrading the nation’s infrastructure (re these longer-term investments, this article from Time magazine reveals another important dimension of how the Act is helping).

There are lots of ways to validate this finding—the article cites the results of a recent study by former Federal Reserve Vice-Chair Alan Blinder and independent economist Mark Zandi, who find that the stimulus:

“…created 2.7 million jobs [so far] and…unemployment would be 11% today if the stimulus hadn’t been passed...”

The article also makes a point about timing that hasn’t been stressed enough. The President signed the Recovery Act on February 19 of last year, less than a month after he got here. Shortly thereafter, loss rates of GDP and job growth began to slow, with GDP turning positive in the third quarter of 2009, and net job growth following shortly thereafter.

Just consider what we view as one of the most important benchmarks of an economy that’s delivering for working families: private sector job growth. Over first seven months of last year, the job market hemorrhaged almost four million private sector jobs. Over those same months this year, the private sector added 630,000 jobs.

That result partly flows from the consumer spending that the Recovery Act helped to support, a point noted in the USAT article:

This important point (remember, 70% of the US economy rests on consumer spending) was underscored in another recent and noteworthy analysis of the Recovery Act by economist Gary Burtless. Check out Figure 2 from his piece, which clearly portrays the impact of the Act on disposable income, leading Burtless to conclude that, “Another tangible sign of a payoff from the ARRA stimulus is the continued strength in consumer spending.” 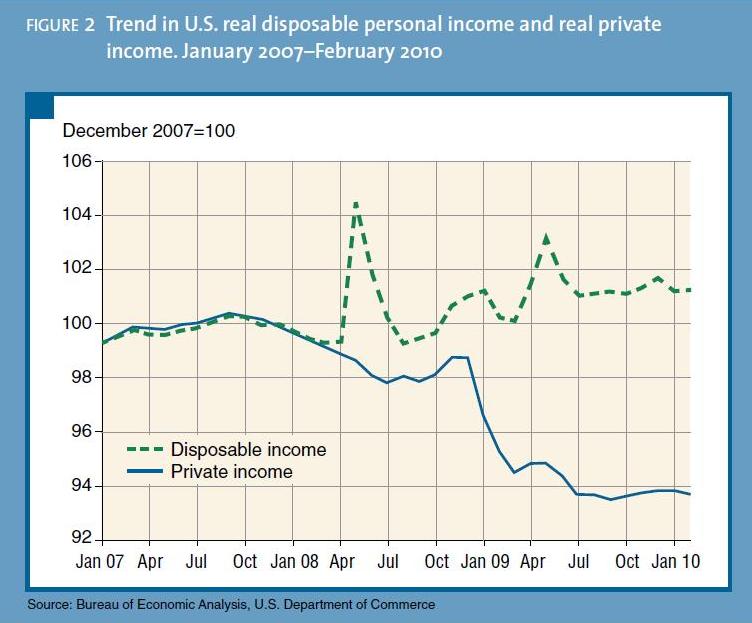 We know more needs to be done to build on the momentum attributable to the Recovery Act. After all, this terrible recession cost the economy more than 8 million jobs. That’s why we’re continuing to push hard for more help for small businesses, forward looking infrastructure investment, and continued support for the jobs of teachers, police, and firefighters.

But amidst a lot of politically motivated noise intended to fog the issues, it’s important to appreciate the building consensus that the Recovery Act has done what it was intended to do: helped to stabilize the economy and save jobs.

And that’s true both on one hand AND the other.