August 31, 2010 at 9:30 PM ET by Jesse Lee
Twitter Facebook Email
Summary:
Having returned hours earlier from a conversation with troops at Fort Bliss, Texas – troops who had seen every phase of what has become one of America’s longest wars – the President spoke to the Nation for just the second time from the Oval Office to announce the end of America’s combat role in that war.
[[nid:20280]]

Having returned hours earlier from a conversation with troops at Fort Bliss, Texas – troops who had seen every phase of what has become one of America’s longest wars – the President spoke to the Nation for just the second time from the Oval Office to announce the end of America’s combat role in that war.  Americans in high school today may barely remember a time when America was not in combat in Iraq, and young adults – including so many of our troops who have sacrificed so much – have almost by definition gone their entire adult lives in a country divided over the war.  Today, as the President put it, was a day to begin to “turn the page” – a day when America could turn its focus towards building itself back up from a devastating recession.

Over all that time, though, as the President pointed out, “there has been one constant amidst those shifting tides”:

At every turn, America’s men and women in uniform have served with courage and resolve.  As Commander-in-Chief, I am incredibly proud of their service.  And like all Americans, I’m awed by their sacrifice, and by the sacrifices of their families.

The Americans who have served in Iraq completed every mission they were given.  They defeated a regime that had terrorized its people.  Together with Iraqis and coalition partners who made huge sacrifices of their own, our troops fought block by block to help Iraq seize the chance for a better future.  They shifted tactics to protect the Iraqi people, trained Iraqi Security Forces, and took out terrorist leaders.  Because of our troops and civilians -- and because of the resilience of the Iraqi people -- Iraq has the opportunity to embrace a new destiny, even though many challenges remain.

So tonight, I am announcing that the American combat mission in Iraq has ended.  Operation Iraqi Freedom is over, and the Iraqi people now have lead responsibility for the security of their country. Having drawn down 100,000 troops since taking office, a much smaller force will stay to train and assist the Iraqi forces during the transition period.  The President was unambivalent on what would happen after that time: “all U.S. troops will leave by the end of next year.”

The President mentioned that Vice President Biden is in Iraq now, having spent the day meeting with Iraqi leaders about working with America's diplomatic team going forward. 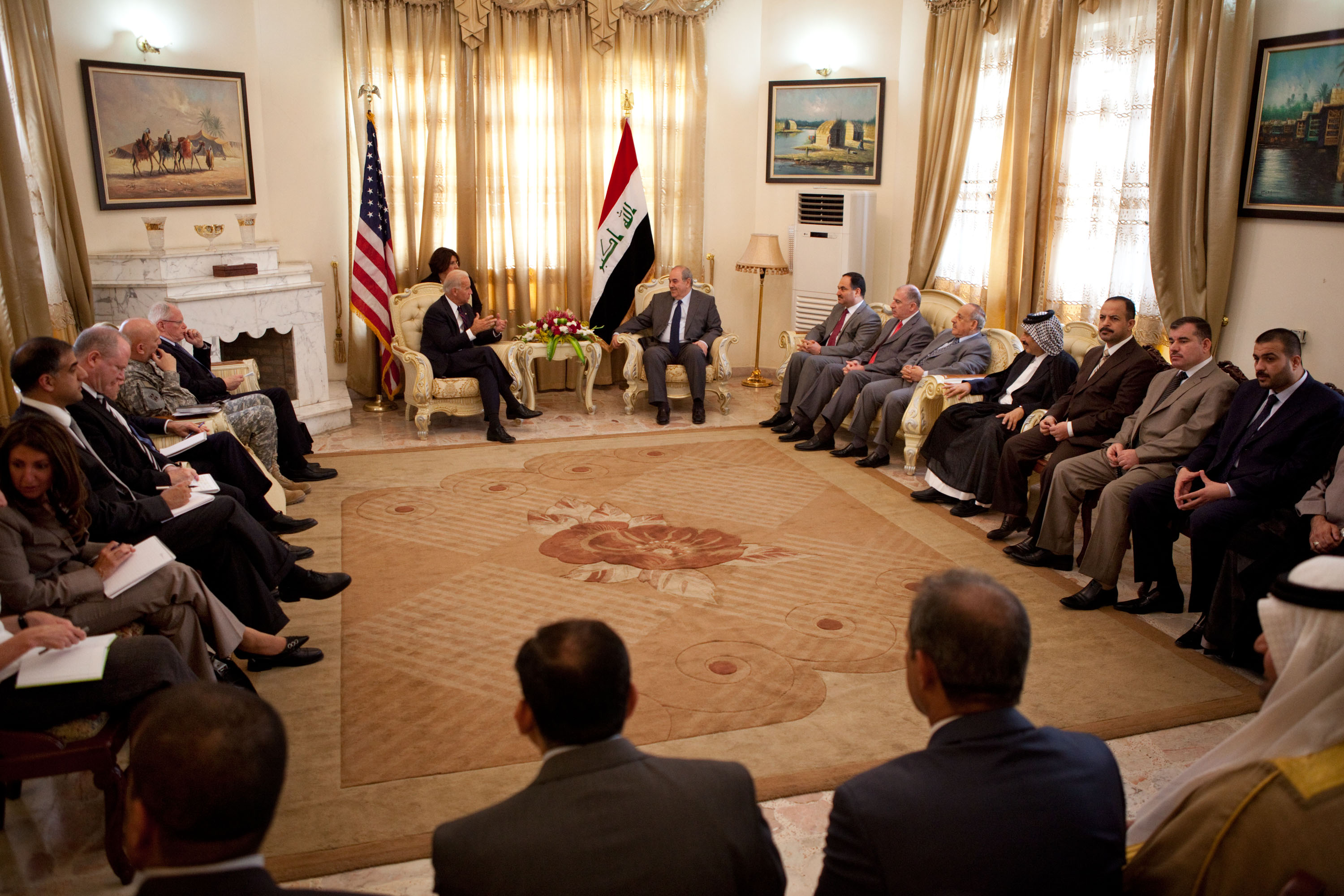 As one war winds down, the President spoke directly to questions about the war in Afghanistan that continues:

Americans across the political spectrum supported the use of force against those who attacked us on 9/11.  Now, as we approach our 10th year of combat in Afghanistan, there are those who are understandably asking tough questions about our mission there.  But we must never lose sight of what’s at stake.  As we speak, al Qaeda continues to plot against us, and its leadership remains anchored in the border regions of Afghanistan and Pakistan.  We will disrupt, dismantle and defeat al Qaeda, while preventing Afghanistan from again serving as a base for terrorists.  And because of our drawdown in Iraq, we are now able to apply the resources necessary to go on offense.  In fact, over the last 19 months, nearly a dozen al Qaeda leaders -- and hundreds of al Qaeda’s extremist allies -- have been killed or captured around the world.

Here too, though, the President made clear that lessons of Iraq have not been lost: “And next August, we will begin a transition to Afghan responsibility.  The pace of our troop reductions will be determined by conditions on the ground, and our support for Afghanistan will endure.  But make no mistake:  This transition will begin -- because open-ended war serves neither our interests nor the Afghan people’s.” 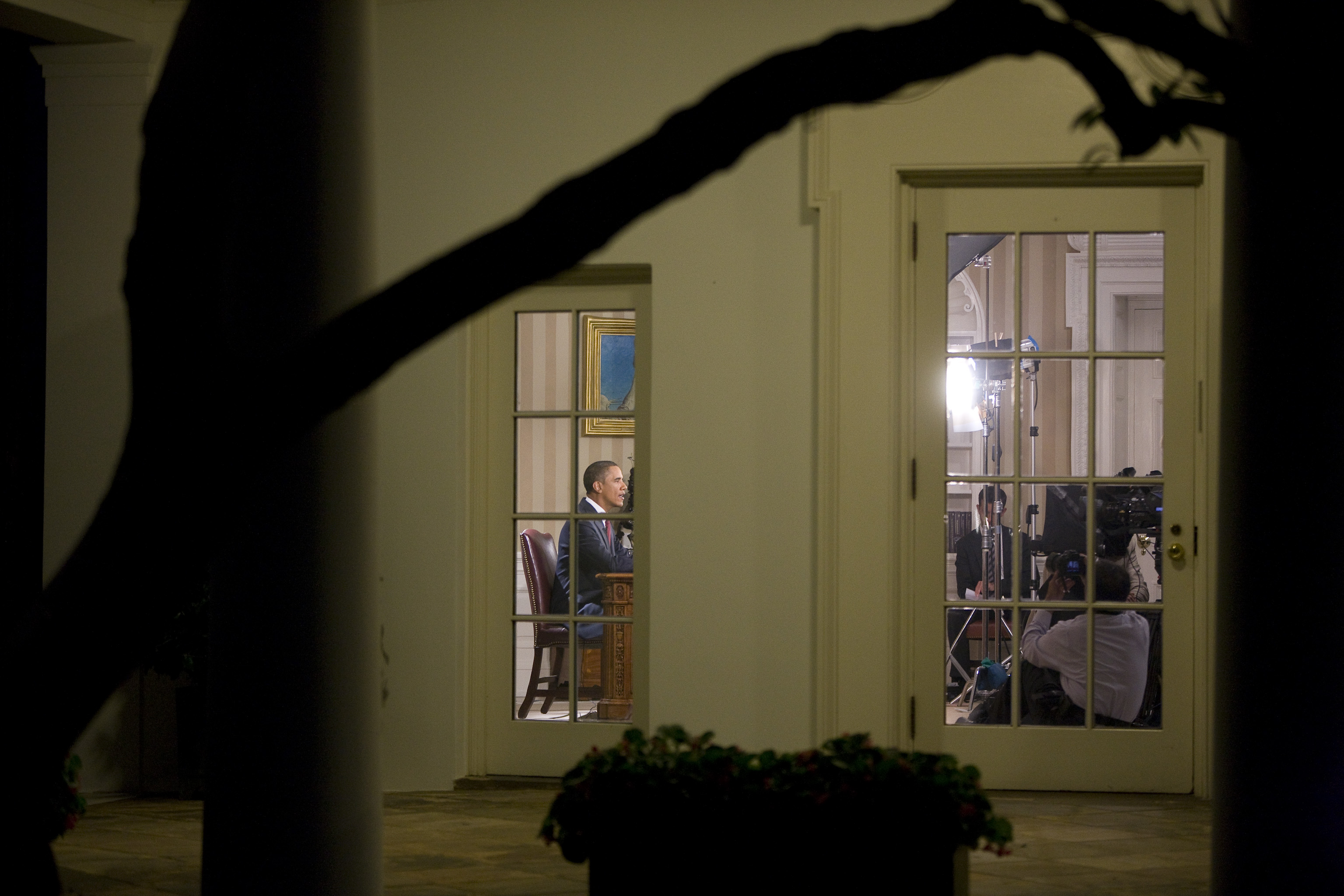 President Barack Obama delivers an address to the nation on the end of the combat mission in Iraq from the Oval Office August 31, 2010. (Official White House Photo by Lawrence Jackson)

Unfortunately, over the last decade, we’ve not done what’s necessary to shore up the foundations of our own prosperity.  We spent a trillion dollars at war, often financed by borrowing from overseas.  This, in turn, has short-changed investments in our own people, and contributed to record deficits.  For too long, we have put off tough decisions on everything from our manufacturing base to our energy policy to education reform.  As a result, too many middle-class families find themselves working harder for less, while our nation’s long-term competitiveness is put at risk.

And so at this moment, as we wind down the war in Iraq, we must tackle those challenges at home with as much energy, and grit, and sense of common purpose as our men and women in uniform who have served abroad.  They have met every test that they faced.  Now, it’s our turn.  Now, it’s our responsibility to honor them by coming together, all of us, and working to secure the dream that so many generations have fought for -- the dream that a better life awaits anyone who is willing to work for it and reach for it.

Our most urgent task is to restore our economy, and put the millions of Americans who have lost their jobs back to work.  To strengthen our middle class, we must give all our children the education they deserve, and all our workers the skills that they need to compete in a global economy.  We must jumpstart industries that create jobs, and end our dependence on foreign oil.  We must unleash the innovation that allows new products to roll off our assembly lines, and nurture the ideas that spring from our entrepreneurs.  This will be difficult.  But in the days to come, it must be our central mission as a people, and my central responsibility as President.

Part of that responsibility is making sure that we honor our commitments to those who have served our country with such valor.  As long as I am President, we will maintain the finest fighting force that the world has ever known, and we will do whatever it takes to serve our veterans as well as they have served us.  This is a sacred trust.  That’s why we’ve already made one of the largest increases in funding for veterans in decades.  We’re treating the signature wounds of today’s wars -- post-traumatic stress disorder and traumatic brain injury -- while providing the health care and benefits that all of our veterans have earned.  And we’re funding a Post-9/11 GI Bill that helps our veterans and their families pursue the dream of a college education.  Just as the GI Bill helped those who fought World War II -- including my grandfather -- become the backbone of our middle class, so today’s servicemen and women must have the chance to apply their gifts to expand the American economy.  Because part of ending a war responsibly is standing by those who have fought it.