September 6, 2010 at 2:16 PM ET by Jared Bernstein
Twitter Facebook Email
Summary:
Jared Bernstein looks at the latest misleading attack on the Recovery Act and calls for cooperation on further measures to boost the economy.

Lindsay Graham has often shown that he’s fully capable of being reasonable and bipartisan. Which made it particularly disappointing to see his misleading use of numbers yesterday.

On Meet the Press, the Senator, against a wave of evidence to the contrary, argued that the Recovery Act has been “an absolute disaster” and called for cancelling “a lot” of what’s left in the bill (transcript here).

His evidence for this claim: “...we’ve lost two-and-a-half million jobs since the stimulus passed.”

Take a look at the figure below and you’ll see why this is so misleading. He’s conflating two periods of very different employment trends. In the first, when his team’s policies dominated, employment hemorrhaged at nightmarish rates. In the second, when the Recovery Act was on the scene, job losses in the private sector began to diminish, and this year, turned positive. 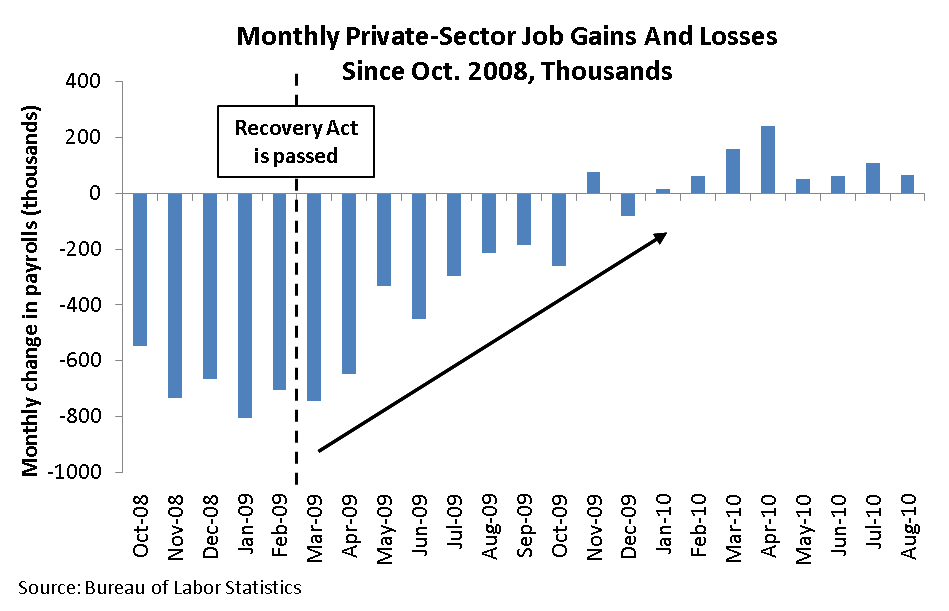 In fact, over the past eight months, the private sector has added over three-quarters of a million jobs (763,000). And reams of analysis associate this turnaround with the Recovery Act.

To conflate these two obviously different periods, when the difference is in fact a direct contrast between our policies and theirs, is seriously misleading.

But it is standard Republican practice these days. They drove the car in the ditch, stood by the road wagging their fingers while the Recovery Act and other policies got it out, and now, as the car is starting off in the right direction, are saying, “hey, their plans can’t be working because that car used to be in a ditch!”

Let me be clear. The car, as I said, is finally moving in the right direction, but it needs to go a lot faster. Eight years of deep neglect has seriously damaged its engine and it’s not going attain full speed right away.

That’s why President Obama continues to work with anyone who’s willing to help to build on the momentum you see in the chart below. As he put it just last Friday: “...the key point I'm making right now is that the economy is moving in a positive direction, jobs are being created, they're just not being created as fast as they need to given the big hole that we experienced.  And we're going to have to continue to work with Republicans and Democrats to come up with ideas that can further accelerate that job growth.”

Most recently, the President called for a significant downpayment on forward-looking infrastructure program (pdf) (fully paid for) to continue the work on the nation’s roads, rails, and runways begun in the Recovery Act. It’s a critical next step on longer term investments in the nation’s productive capacity that will, in the short term, create good jobs for folks facing particularly high unemployment.

In the interest of getting that car back up to speed as quickly as possible, we urge Senator Graham and his colleagues to work with us on this and other bipartisan ideas.