President Obama in a Fairfax Backyard

September 13, 2010 at 6:31 PM ET by Jesse Lee
Twitter Facebook Email
Summary:
John Nicholas and Nicole Armstrong graciously host the President for a discussion on the economy at their home in Fairfax, Virginia with some of their neighbors.
[[nid:20729]]

"So my question is," began a woman in the the backyard of John Nicholas and Nicole Armstrong,  "I work for Fairfax County public schools, and I haven’t had a raise in two years and I may not even have a job next year -- because I hear it’s going to get worse before it’s going to get better.  Do you agree with that?  Like, I mean, I know it’s -- we’re starting to improve and jobs are starting to come back, but how long do you think this is going to take?" 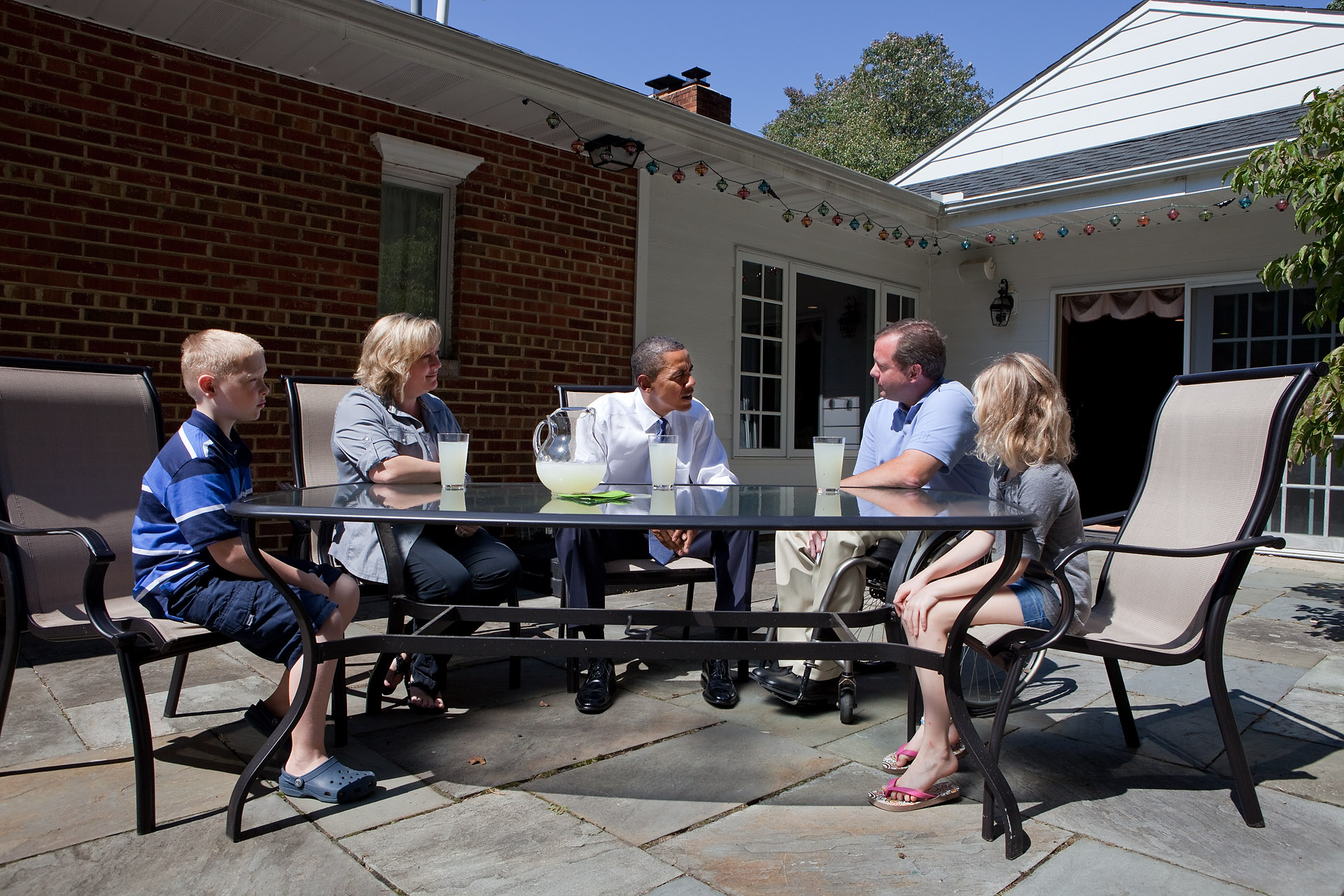 President Barack Obama talks with John Nicholas, Nicole Armstrong, and their twins Trevor and Olivia, on the patio of their home in Fairfax, Virginia September 13, 2010. (Official White House Photo by Chuck Kennedy)

The President had just taken some time to talk and listen to his hosts -- John has worked in technology for a global Internet services company since 1999 and has survived several rounds of layoffs, while Nicole recently decided to go back to work part-time at a local preschool -- and now their neighbors had a chance to ask him about his plans and his decisions on the economy.  He spoke about his plans to put people to work rebuilding America, his plans to boost small business, and his plans to incentivize new investment.  All of their questions were reminders that talk of "the economy" as encapsulated on cable news can be far removed from the real effects on real lives, and the entire transcript of the 65-minute discussion is worth skimming.  But as the President noted, the decisions that are made in Washington can indeed have very real implications, including those that have been made over the past two years:

THE PRESIDENT:  Well, first of all, you have a better chance of keeping your job in the public school systems now, because Gerry and Jim voted to close a pretty egregious tax loophole that was incentivizing jobs going overseas and that even some corporations that stood to benefit thought was ridiculous.  They closed that loophole in order to fund teacher jobs and police officer jobs and firefighter jobs all across the country.  So that’s been very helpful in providing assistance to school districts that are strapped.

The economy is improving.  But one of the headwinds that the economy is experiencing is actually that state and local governments have been getting really hard hit.  Now, we gave states a lot of help at the beginning of this crisis because their budgets were just imploding.  And typically state and local governments, they get hit faster by declines in tax revenues and property tax -- obviously they’re relying on property taxes, and with the housing market collapsing, that was really hitting them hard.  And so they were looking at possibly laying -- slashing 30 percent of jobs in school districts or in social services.

And one of the most effective ways of preventing this from tipping over into a Great Depression was giving them help.  The problem is some of that help is running out.  And property tax revenues haven’t improved yet; sales tax revenues haven’t improved yet as much as they’d like.  So local districts, states, are still having big budget problems, and they’ll probably have those big budget problems next year.

So that's why the steps that we took were so important.  And I’ve got to say, this is an example of where you’ve just got a fundamental disagreement between Republican leadership right now and Democrats.  John Boehner, who stands -- wants to be the Speaker -- the next Speaker of the House, if the Republicans take over, he specifically said, well, these are just government jobs and they're not worth saving.  And he fought -- he voted no on closing this tax loophole that was incentivizing jobs from going overseas.

Now, it’s just not smart from an economic perspective for us to allow a whole bunch of those jobs that are right here in the United States to go away while we’re giving tax revenue away to companies that are creating jobs somewhere else.  It just doesn’t make sense.

And so we’re going to continue to have some of these battles over the next several years.  And I think that, frankly, how state and local governments are able to deal with these budget challenges next year is in part going to depend on whether the people who are making the decisions are Jim and Gerry, or whether they're John Boehner -- because they’ve just got a different set priorities.  And I don't know about you, but I like these guys making these decisions more than the other folks.  (Applause.)  But that's just my unbiased opinion. 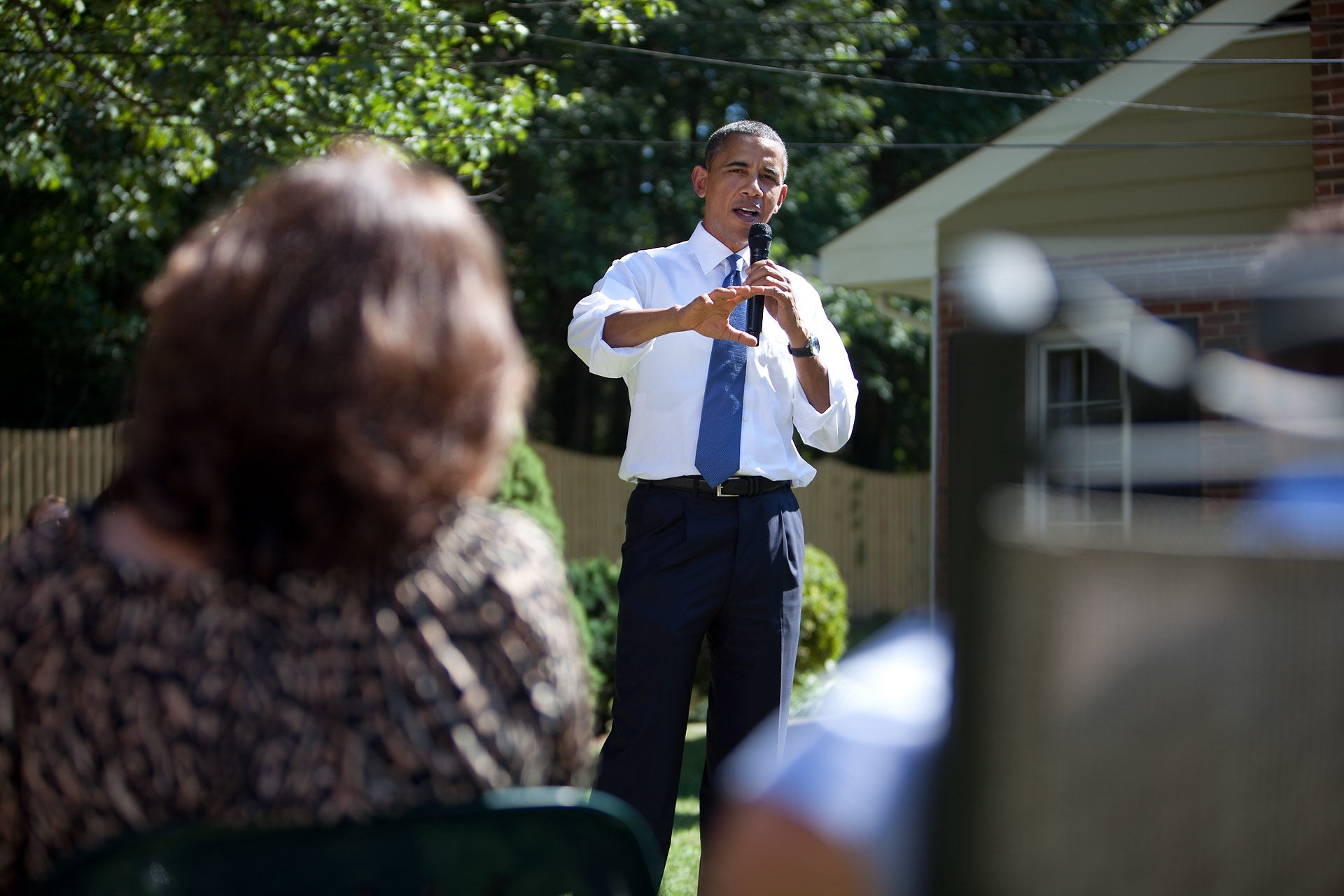 President Barack Obama responds to a question during a discussion on the economy with area families in the backyard of the John Nicholas and Nicole Armstrong family home in Fairfax September 13, 2010. (Official White House Photo by Samantha Appleton)