The President's Back to School Speech: "We Not Only Reach For Our Own Dreams, We Help Others Do the Same"

September 14, 2010 at 2:47 PM ET by Jesse Lee
Twitter Facebook Email
Summary:
The President gives his second annual back-to-school speech, telling students to take responsibility for their educations, recounting his own experience, and telling them to look out for each other.
[[nid:20743]]

This afternoon the President gave his second annual back to school speech, this time around at Julia R. Masterman Laboratory and Demonstration School in Philadelphia, PA, a 2010 National Blue Ribbon School.  Like last year it was an opportunity to speak directly to students, in a speech shown in schools across the country, about the importance of committing to their educations.

He began by talking to them on the level about what they see in their daily lives, and what might be on their minds even beyond the dreaded end of summer vacation:

And beyond all those concerns, I know a lot of you are also feeling the strain of some difficult times.  You know what’s going on in the news and you also know what’s going on in some of your own families.  You’ve read about the war in Afghanistan.  You hear about the recession that we’ve been through.  And sometimes maybe you’re seeing the worries in your parents’ faces or sense it in their voice.

So a lot of you as a consequence, because we’re going through a tough time a country, are having to act a lot older than you are.  You got to be strong for your family while your brother or sister is serving overseas, or you’ve got to look after younger siblings while your mom is working that second shift.  Or maybe some of you who are little bit older, you’re taking on a part-time job while your dad’s out of work.

And that’s a lot to handle.  It’s more than you should have to handle.  And it may make you wonder at times what your own future will look like, whether you’re going to be able to succeed in school, whether you should maybe set your sights a little lower, scale back your dreams.

And that last part is absolutely essential, that part about really working hard in school, because an education has never been more important than it is today.  I’m sure there are going to be times in the months ahead when you’re staying up late doing your homework or cramming for a test, or you’re dragging yourself out of bed on a rainy morning and you’re thinking, oh, boy, I wish maybe it was a snow day.  (Laughter.) 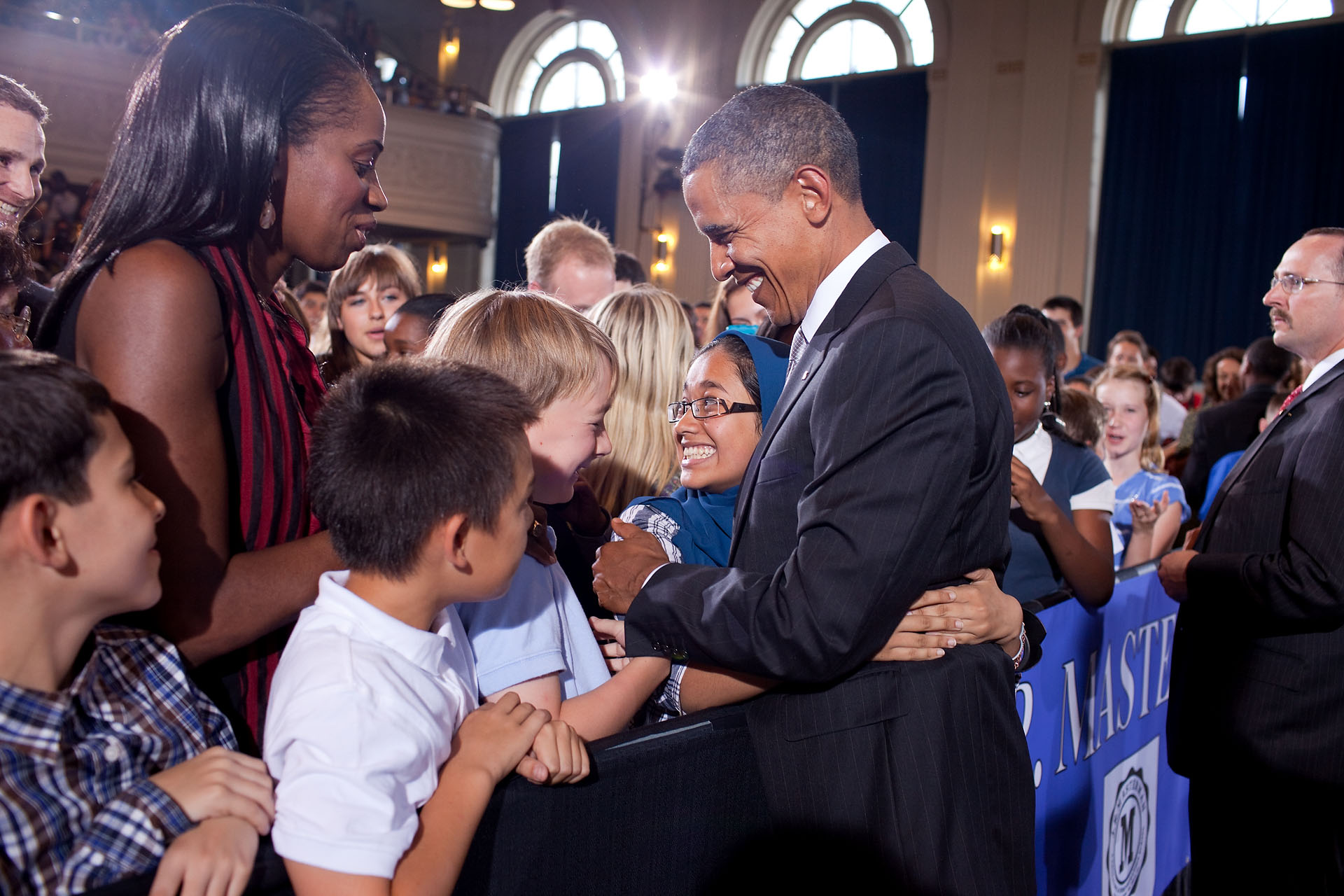 The President pledged that government at all levels, working with communities and families, would do its part to make it possible for students to get the best education.  But he hammered home the point that the only people who could really make sure that happened were the students themselves, and harkened back to his own childhood:

I wasn’t always disciplined.  I wasn’t always the best student when I was younger.  I made my share of mistakes.  I still remember a conversation I had with my mother in high school.  I was kind of a goof-off.  And I was about the age of some of the folks here.  And my grades were slipping.  I hadn’t started my college applications.  I was acting, as my mother put it, sort of casual about my future.  I was doing good enough.  I was smart enough that I could kind of get by.  But I wasn’t really applying myself.

And so I suspect this is a conversation that will sound familiar to some students and some parents here today.  She decided to sit me down and said I had to change my attitude.  My attitude was what I imagine every teenager’s attitude is when your parents have a conversation with you like that.  I was like, you know, I don’t need to hear all this.  I’m doing okay, I’m not flunking out.

So I started to say that, and she just cut me right off.  She said, you can’t just sit around waiting for luck to see you through.  She said, you can get into any school you want in the country if you just put in a little bit of effort.  She gave me a hard look and she said, you remember what that’s like?  Effort?  (Laughter.)  Some of you have had that conversation.  (Laughter.)  And it was pretty jolting hearing my mother say that.

But eventually her words had the intended effect, because I got serious about my studies.  And I started to make an effort in everything that I did.  And I began to see my grades and my prospects improve.

The President spent the last portion of his speech touching on the pressures almost all kids face growing up at some time or another, and challenged students to be part of the solution, not part of the problem:

So, what I want to say to every kid, every young person -- what I want all of you -- if you take away one thing from my speech, I want you to take away the notion that life is precious, and part of what makes it so wonderful is its diversity, that all of us are different.  And we shouldn’t be embarrassed by the things that make us different.  We should be proud of them, because it’s the thing that makes us different that makes us who we are, that makes us unique.  And the strength and character of this country has always come from our ability to recognize -- no matter who we are, no matter where we come from, no matter what we look like, no matter what abilities we have -- to recognize ourselves in each other.

I was reminded of that idea the other day when I read a letter from Tamerria Robinson.  She’s a 12-year-old girl in Georgia.  And she told me about how hard she works and about all the community service she does with her brother.  And she wrote, “I try to achieve my dreams and help others do the same.”  “That,” she said, “is how the world should work.”  That’s a pretty good motto.  I work hard to achieve my goals and then I try to help others to achieve their goals.

And I agree with Tamerria.  That’s how the world should work.  But it’s only going to work that way if all of you get in good habits while you’re in school.  So, yes, each of us need to work hard.  We all have to take responsibilities for our own education.  We need to take responsibility for our own lives.  But what makes us who we are is that here, in this country, in the United States of America, we don’t just reach for our own dreams, we try to help others do the same.  This is a country that gives all its daughters and all of its sons a fair chance, a chance to make the most of their lives and fulfill their God-given potential. 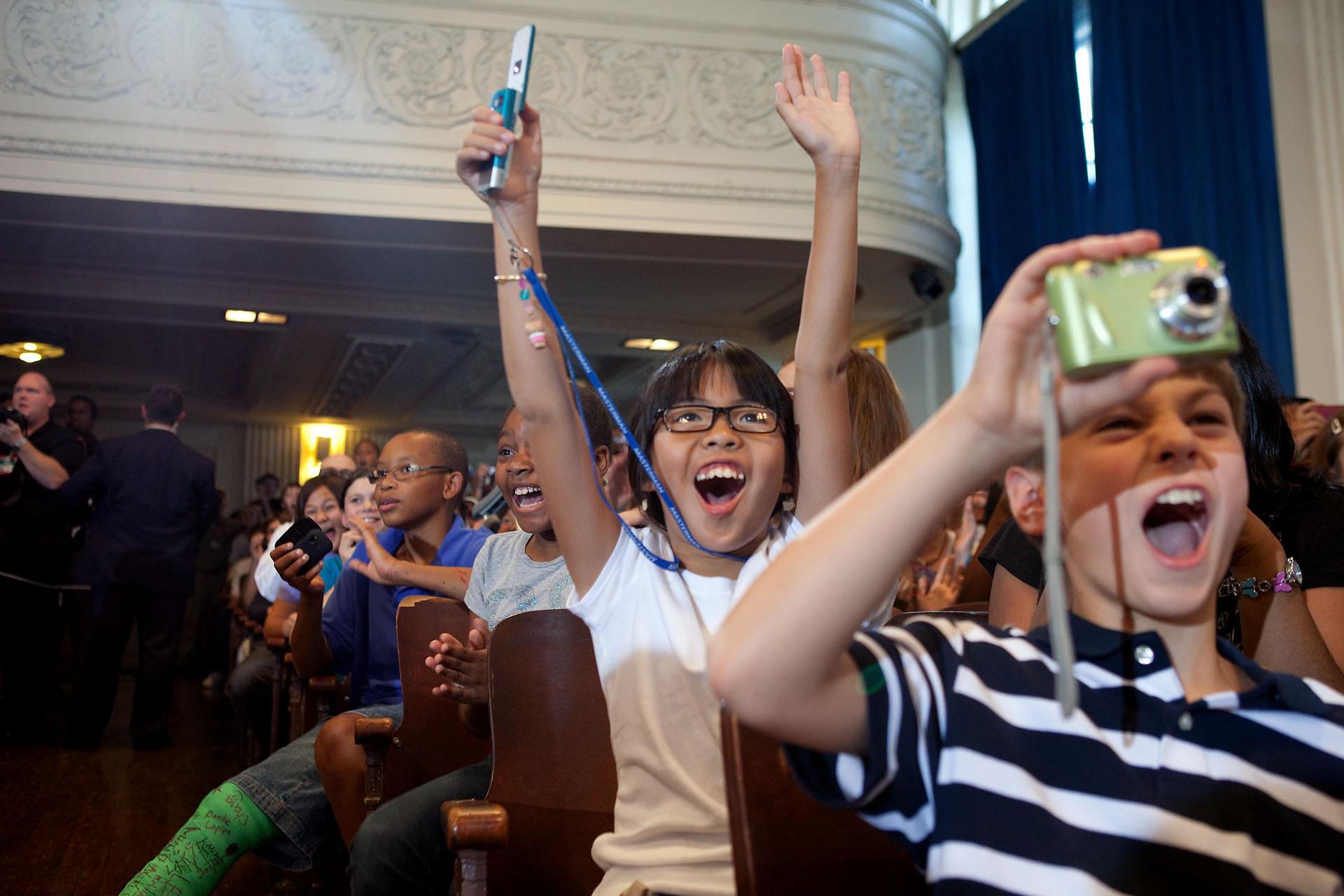