September 17, 2010 at 8:37 AM ET by Rick Weiss
Twitter Facebook Email
Summary:
<p> OSTP Director John P. Holdren yesterday participated in an awards ceremony for the Progressive Automotive X Prize, a public-private challenge in which a total of $10 million in prizes was awarded to three teams that created production‐capable vehicles with energy-efficiency equivalence ratings of at least 100 miles per gallon.</p>

OSTP Director John P. Holdren yesterday participated in an awards ceremony for the Progressive Automotive X Prize, a public-private challenge in which a total of $10 million in prizes was awarded to three teams that created production‐capable vehicles with energy-efficiency equivalence ratings of at least 100 miles per gallon.

Established automakers, start‐ups, universities, independent inventors, and even a high school team were among the 111 teams that entered the competition, which was sponsored in part by the Department of Energy. Dr. Holdren announced the winning team in the “Alternative, Side-by-Side Seating” class: The Mooresville, N.C.-based “Li-ion” Team, short for lithium ion, which is the kind of battery that powers this elegant, all-electric vehicle.

In tandem with important aerodynamic features that enabled it to achieve 182 MPGe in on-track testing, this vehicle also accelerates from zero to 60 mph in just 14.7 seconds and boasts a range of more than 100 miles in realistic driving.

As Dr. Holdren noted during the ceremony, the Progressive Automotive X Prize embodies much of what President Obama has said over the past year about the value of using prizes and challenges as a way of tapping the ingenuity of citizen solvers to meet the many challenges today facing the Nation.

“The President knows that the challenges we face today—challenges relating to energy, the environment, agriculture, and national security—are simply too big for government or the usual private-sector problem-solvers to solve alone. We need all hands on deck,” he said. “That is why it is so inspiring to see that the teams honored here today are entrepreneurs outside the circle of “usual suspects” in the auto industry. One telltale sign of that is that the Li-ion Motors team is from North Carolina—which no one can really think of as a suburb of Detroit.”

In September 2009, the President announced his Strategy for American Innovation, in which he called upon agencies to increase their ability to promote and harness innovation by using tools such as prizes and challenges to solve tough problems. In March 2010 the White House Office of Management and Budget issued a memorandum to all agency heads affirming the Administration’s commitment to this approach and providing a policy and legal framework to guide agencies in using prizes to stimulate innovation to advance their core missions.

And just last week, the White House unveiled Challenge.gov, a new online platform where entrepreneurs, innovators, and citizen solvers can compete for prestige and prizes by providing novel solutions to tough national problems, large and small. Check it out, and see if there is a problem you might be able to solve!

Congratulations to the Li-ion team and all the Automotive X Prize winners celebrated today. 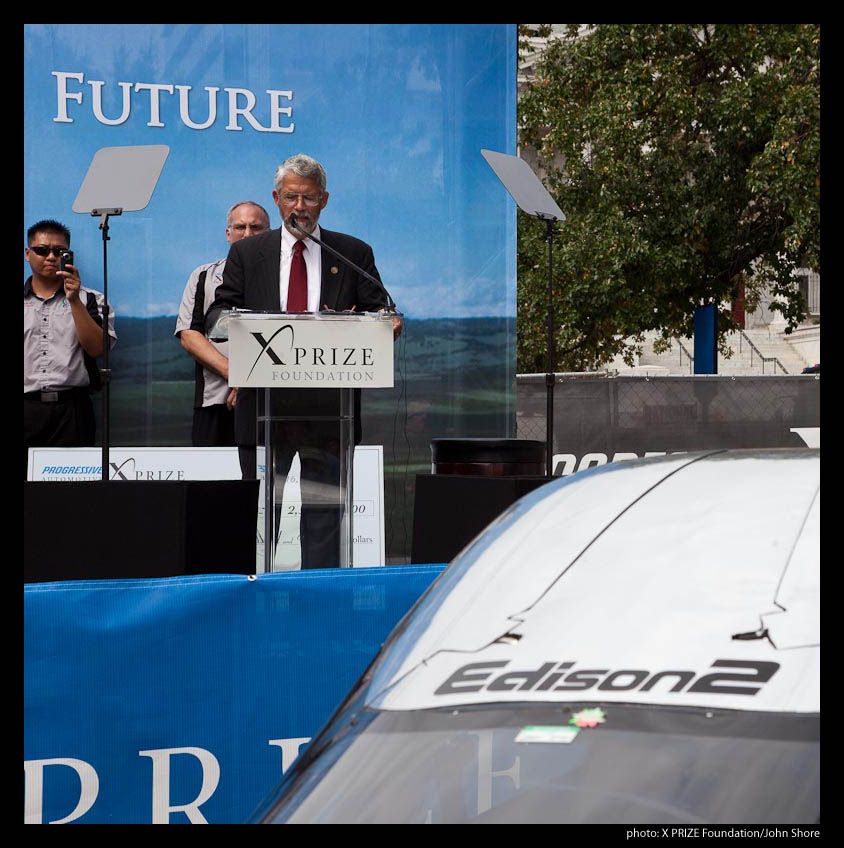